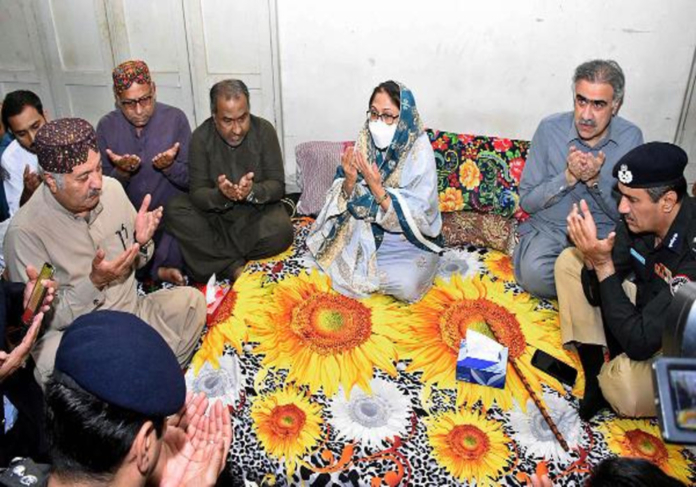 Inspector General Police Sindh on Monday visited Ghotki and held a meeting with police officials in Ghotki, Sukkur and Larkana to find ways to fight lethally armed bandits who killed five cops in Ranwati area of the district.

SSP Ghotki Tanweer Ahmed Tunio briefed him about the current situations of the gangs operating in riverine areas of the district and made it clear they could only eliminate them if provided with modern weapons and vehicles. SSP Tunio said that he was ready to lead the operation after Rahib Shar, the ring leader of the hardened criminals had challenged him in his recent video clips.

Memon highly appreciated the attentions of Tunio but reportedly asked him to refrain from making any hasty decision before they were fully equipped with required equipment and arms. Memon also went to Larkana town he offered his condolences with the heirs and relatives of the slain DSP Abdul Malik Bhutto. Speaking to the media, Memon said that he had directed the police officials from both Sukkur and Larkana divisions to compete their homework before they could launch an effective operation to eliminate them.

He said that he was in contacting with his counterparts and other top police officials in Balochistan and Punjab so that they could be sought during the operation. He said that despite martyrdom of five cop’s police officials as well as cops were in high morale. The IG Sindh said that he also directed the SSPs during his two-day stay to prepare the comprehensive list of all bandits and hardened criminals do that they could announce the head money on them. The PPP leader MPA Faryal Talpur also met Memon and assured her support in their efforts to fight with outlaws and criminals.

The FIR of the killing five cops and injuring four others was registered against 70 bandits on Monday. The Station House Office of Obayaro Police Station Asghar Awan lodged the FIR against 70 bandits under different sections of Pakistan Penal Code and Anti-Terrorism Act. The notorious dacoits of the area including Rahib Shar, Janu Indhar, Soomar Shar, Sanallah Shar, Kararo Shar were among others dangerous bandits who were nominated by SHO Awan in his FIR.

Chief Minster Sindh Syed Murad Ali Shah speaking to the media persons here on Sunday night outright rejected that bandits were being supported and patronized by those sitting with them in Sindh government. Shah said that it was totally misleading and wrong perception created by some vested interest that bandits and outlaws were being harbored by poltical personalities associated with PPP. He said that following the allegations of the former SSP Shikarpur Dr Rizwan against the PPP leaders a thorough probe was made by high-ranling officials on hid directions and they found no evidence in his allegations and had out right rejected the report prepared by Dr Rizwan.

He said that they would sanction the huge amount of Rs3.5 billion for the purchase of modern weapons and vehicle for police force of Sindh. Shah disclosed that bandits operating in some areas had lethal weapons like anti-aircraft guns adding he deplored that it was very unfortunate that police was lacking such weaponry. He met injured cops and praised their bravery during his visit to Sukkur along IG Sindh Ghulam Nabi Memon.

It may be noted that between Saturday-Sunday night dacoits attacked police in the area of Rounti, the katcha area of Ghotki district and killed five policemen, including DSP Abdul Malik Bhutto, SIP Deen Muhammad Leghari, Inspector Abdul Malik Kamangar, PC Jatoi Pitafi. Shab said that his government would provide land for permanent police stations in katcha area and directed IG police to submit a proposal for allowing ‘katcha area allowance’ to the policemen working in katcha areas.

The CM was told that three young boys have been kidnapped by the dacoits in Ghotki district. The police was preparing to recover them. Shah said that a detailed proposal for procuring APS, The chief minister directed the police to submit a detailed proposal for fixing head money of the dacoits involved in kidnapping for ransom and killing in the katcha areas of Sukkur and Larkana division.

Shah directed police to work out strategy to cut or block weapons supply line of the dacoits. “There must be some people supplying weapons to the dacoits living in the katcha areas,” he said and added how the dacoits were getting weapons, who are supplying them and how it all was being managed were big question. The chief minister, at the outset of the meeting offered dua for the policemen killed by the dacoits and for the early recovery of the injured. The CM also decided that the preference would be given to the local in the recruitment for Riverine police.