Political imbroglio and the solution 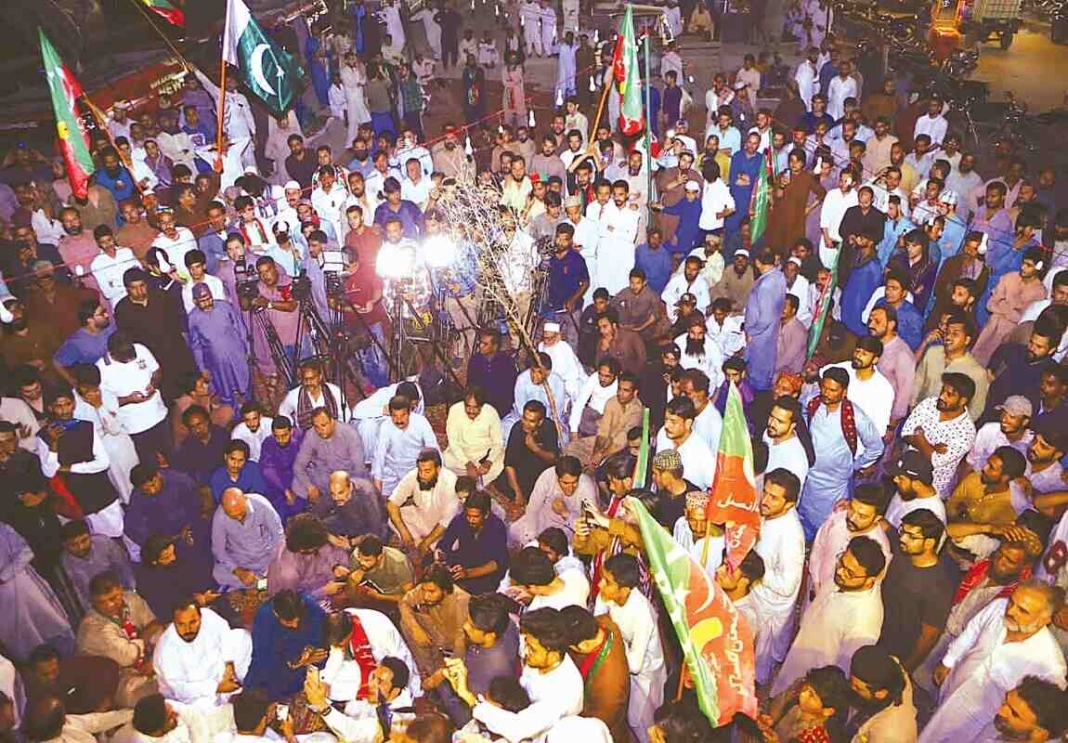 It is unfortunate that, despite being 75 years old, the country’s political and economic crisis is far from over. The leaders, bereft of acumen and sensibility, continue to exchange barbs in the assembly as well as through press conferences, using derogatory language against each other, crossing all moral frontiers. Political disarray and instability have impacted the economy to the extent that the dollar has rocketed upwards while the rupee continues to lose its value and has slipped to its bottom due to falling exports and depleting foreign exchange reserves. The IMF programme on tough conditions and regulations has jolted the whole economic system, and turbulent political instability has further worsened the situation. An alarming condition is ahead if incompetence continues to haunt the economic policies. In such circumstances, the political parties should show restraint and take serious steps to resolve this impasse that has overcast the clouds of uncertainty. The people are more concerned regarding the state and the fear of default than their political parties or the dirtiest political conspiracies and tactics to stick to corridors of power. They have almost forgotten their role as reformers and problem solvers instead of just creating such a mess that is deteriorating the situation with each passing day. The mainstream parties such as PPP, PML-N, and JUI have joined hands to defend their overtures, whether they take place by hook or crook. Their 15-party coalition seems to be at daggers drawn towards PTI as they have forgotten their national role to take the people out of the crisis. The PTI is under the radar of the ruling coalition as the narrative built by Imran Khan has dusted their political future.

The tested and tried parties have got power through conspiracy, though they claim to have the legitimate right to rule the country by amending the NAB laws and depriving overseas Pakistanis of the right to vote, fearing that extending the right to vote and the EVM may take these corrupt elements out of the election-winning race. Since they are well aware that the overseas Pakistanis have strong support for PTI so they want them out of the electoral process. The evil designs of this rejected class are crystal clear that they are not sincere with those ex-pats from whose exchange Pakistan’s economy gets strong support. Furthermore, the governance crisis in the biggest province of Pakistan, Punjab, has further aggravated the situation. Since the resignation of CM Usman Buzdar, Punjab has been run either on an adhoc basis without any government or as a trust. The “musical chairs” between Hamza Shahbaz and Chaudhry Pervez for Punjab’s top slot have already messed up the situation and created a political crisis. Though the Supreme Court decision in favour of PTI Nominee Chaudhry Pervez Elahi has so far cleared the air for the time being.

Luckily, the PTI and PML-Q coalition has been successful in installing their government in Punjab and winning the Speaker and Deputy Speaker slots. However, the PML-N-led coalition has challenged the Speaker’s election in the High Court, which is also ringing alarm bells if the High Court terms the Speaker’s election null and void. It is beyond understanding that on the one hand PTI demands General Elections to bring Political and Economic Stability to the country but on the other hand, it wants to hold Provincial Governments of KPK and Punjab. Especially after regaining power in Pakistan’s largest provinces, the PTI seems to have backed out of its general election demands. The existing constitutional crisis is far from over as both PTI and PDM-led coalition are at loggerheads and making every effort to destabilize the PTI Government in Punjab province as, without it, the coalition appears to be limited to Federation as PTI has government in KP and Punjab Province. The politics of revenge, opposition, ego and stubbornness have shaken the very roots of the country. The economic and political crisis seems to have no signs of an end given the polarised and selfish nature of the leaders. The political imbroglio starting with the no-confidence motion is far from over as it is deepening with each passing day.

The leadership crisis is evident from the prevalent state of affairs when the dollar is rising against the rupee and depleting foreign exchange reserves ring the alarm bells for the country, but our political parties, being devoid of sensibility, continue infighting over the lust for power or throne. The political theatre has opened many fronts that are increasing the risky journey ahead, including electoral reforms, delimitation, falling rupee, terms of engagement with the IMF program, and efforts to get the IMF tranche released. Even the Army chief approached the US to expedite the release of the tranche so the emerging economic crisis could be tackled and falling foreign exchange reserves could be increased. The fuel price hike has already created inflation costing heavy to common men, but the so-called coalition parties in power just show their teeth in mass gatherings that everything is going fine. Their non-serious attitude shows that they will not provide any relief to common people. They are concerned for the power and want to retain it for a long time as they believe that PTI after the en masse resignations saga, are out of the contest and they will not experience any opposition as PTI is not mulling over returning to Parliament terming the multi-party coalition as a mixed pickle.

The PTI terms the coalition an “imported government” since it was formed with external support. If the PTI MNAs return to the assembly, they will have the feeling that on their government benches they will find those criminals who were either convicted or sentenced. Meanwhile, the acceptance of the resignation of 11 MNAs of PTI by the Speaker National Assembly and their subsequent denotifying notification by the Elections Commission of Pakistan has added fuel to fire in the already polarised and turbulent political situation. Fearing the adverse decision in the alleged foreign funding case by the Election Commission of Pakistan, the PTI passed resolutions in both the Punjab and KP Assemblies demanding the resignation of the Chief Election Commissioner. Even PTI has decided to register a reference in the Supreme Court of Pakistan against Chief Election Commissioner Sikandar Sultan Raja and his members. The establishment, being neutral or apolitical, must come forward to unite the political forces so that a strategy is devised to revive economic growth and stop the rupee from further losing value. The judiciary is performing very well since it is proactive in helping prevent the country from falling prey to turbulent political and constitutional crises.

The political leaders have their own priorities rather than those of the national interest, and that is causing the economy and stock market to crash. The political debacle emancipating in the Punjab Assembly has engulfed the entire country since all coalition parties were pressing hard to make the full court to hear the case of Deputy Speaker Dost Mohammad Mazari’s ruling regarding the PML-Q Party Chief’s alleged letter calling the MPAs to vote for Hamza Shehbaz instead of the Parliamentary party nominee Chaudhry Pervez Elahi, who had a thumping majority in the House with 186 votes against Hamza’s 179 votes. But it was rejected by the Supreme Court, which clarified that the full bench was not needed to decide the case, and decided the case in favour of Chaudhry Pervez Elahi, terming the Deputy Speaker’s ruling null and void. Since then, the Political weather has become very hot and PML N-led coalition Government has built pressure on ECP to announce foreign funding cases of PTI to continue their political rivalry as they want that the PTI should be banned and Imran Khan should be sentenced for receiving funding from Israel and India. Their reliance on the outcome of the PTI’s foreign funding case is aimed at political rivalry with PTI chief Imran Khan and his party due to its narrative of corruption.

The decision was reserved for eight years, but finally, it is being announced after the ruling coalition exerted too much pressure on the Election Commission of Pakistan. The PTI will eventually challenge the decision. Political analysts are of the view that the political crisis will further deepen and will further aggravate economic conditions and the Pakistani rupee slide against the dollar. It is the need of the hour to have the charter of the economy and reach a consensus to hold early general elections so that the economic and political situation may be stabilised with a new government with a simple majority, whoever gets it. The concerns and fears do predict that ECP’s sudden decision to announce the foreign funding case will create the worst political crisis, which will risk the economy and provide an opportunity for the country’s foes to conspire against the fragile state of affairs. Let’s hope that whatever happens, it should not have any adverse effect on the country’s disarrayed political arena because of the economic crisis, increasing power tariffs and skyrocketing inflation that have already made the lives of common men miserable, and the uncertain situation presents a grim outlook that is dangerous for the country. It is imperative for all the parties to sign the charter of the economy so that economic conditions can be improved. It is in the national interest to have an apolitical COE that can put the economy on the right track.