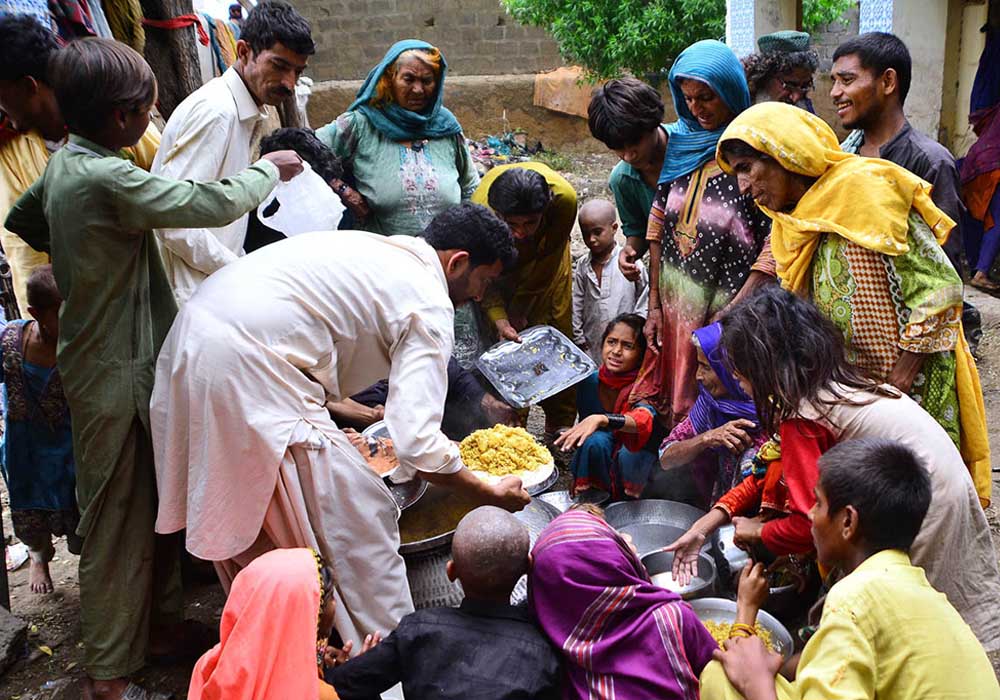 The Report indicates Pakistan’s poverty headcount ratio at $1.90 per day. According to World Data Lab, the number of people living under extreme poverty condition is over 12 million, whereas the current escape rate is 2.2 percent and the targeted escape rate is 2.7 percent

The Report further shows that our ranking on other SDGs is equally disappointing. SDG16 that relates to peace, justice and strong institutions shows that homicides (per 100,000 population) were 3.8 in 2019, whereas un-sentenced detainees (% of prison population) were 65.7 in 2016. It further states that population, feeling safe walking alone at night in the city or areas where they live, is around 63% in 2021. However, our ranking related to property rights (worst 1–7 best) was 3.9 in 2020.

The Report unequivocally shows that not only do we have to work on the improvement of social sector but on governance as well. Both are interlinked and cannot be improved in isolation. Being an underdeveloped country, our current challenges are rise in debts, export marginalization, energy crisis and climate vulnerability. However, these challenges are the result of bad governance for a long period of time. In the last four years, the country witnessed approximately 80 percent rise in public debt yet the volume of our economy kept shrinking and even witnessed negative growth with inflation skyrocketing. Large scale manufacturing, foreign direct investment and exports witnessed downward trend in the last few years. On the other hand, Pakistan’s ranking on ease of doing business still needs substantial improvement. The recent ranking, —at 108 out of 193 countries—though slightly improved, is still not satisfactory.

The cost of doing business in Pakistan is very high mainly due to 15% policy rate of State Bank of Pakistan (SBP), which is very challenging for businesses to meet their running finance needs. On the one hand, Pakistan is facing worse electricity crisis, including both load shedding and high cost per unit. On the other, high energy prices are the main factor, triggering the double digit inflation and negatively impacting businesses, besides creating extreme financial hardships for ordinary citizens.

Recently, the Federal Finance Minister negotiated electricity rate with exporters. However, this decision was considered by various financial experts as a violation of the existing agreement with International Monetary Fund (IMF). Pakistan, being in the IMF programme, is under obligation to follow the conditions for its smooth completion and to improve the economic outlook of the country. However, merely implementing action items to fill the revenue gap and ignoring policy actions mentioned in the IMF agreement will create hurdles for the government and the people in future. Therefore, we should focus on introduction of fiscal reforms and implement the policy actions to generate enough revenues (tax and non-tax) to improve our social sector indicators.

The rulers must realise that investment in people’s health and education can earn a huge dividend in the long run. Our current spending in health, education, special assistance and revenue collection apparatus is very low as against regional income groups’ average. We need to continuously work on improving our social sector indicators, For this, we must take full advantage of the 5th United Nations Conference on the least Developed Countries (LDC5) providing an opportunity to least developed countries (LDCs) to get the support they genuinely need to deal with their sustainable development challenges. Planned to be held in two parts, the first was held in New York on March 17, 2022 that adopted the Doha Programme of Action for Least Developed Countries. The Doha Programme offers stronger support to help them overcome the structural challenges they encounter. The second part of the conference to be held in Doha from March 5-9, 2023 will be attended by global leaders, civil society personnel, private sector representatives, youth representatives and other stakeholders to formulate a new plan for the delivery of the programme of action over the following decade.

We need to realise that we cannot eradicate poverty without investing in human capital. Our neighbor, India has realised the importance of investing in human capital and producing the best human resource in the world. In the United States, many from Indian origin are leading major corporations. As per the Human Capital Index 2020, India was ranked 116/174 and receiving huge amounts of foreign remittances.  On the other hand, Pakistan ranked at 164th, placed behind Rwanda ranked 163rd. Pakistan’s budget on higher education has witnessed downward trend in recent years testifying to our apathy towards producing a much-needed skilled workforce.

In the era of Fourth Industrial Revolution, our traditional style of running affairs of the state cannot bring any good, but is bound to burden the nation with further costly debts, higher inflation and rising unemployment. We are currently facing a major climate crisis in the form of heavy floods and rains, the recent ones causing a loss of over US$ 30.1 billion that includes $ 14.9 billion worth of destruction and $15.2 billion in losses as per Post-Disaster Needs Assessment (PDNA). The report further states Pakistan needs around US$ 16.3 billion as rehabilitation and reconstruction cost. For an already struggling economy that is unable to meet its current account deficit, raising additional funds of over $ 30 billion is an uphill task. We will keep on suffering, unless we learn from the success stories of our neighboring countries and friends.