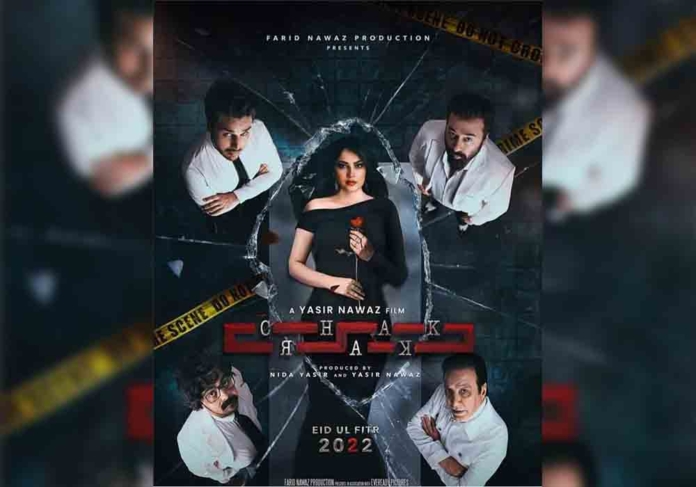 Yasir Nawaz has released the poster and teaser for his upcoming cinematic venture called ‘Chakkar’.

‘Chakkar’, as the teaser tells, will be incorporating elements of thrill, mystery and action, with Neelum Munir in the leading role. Other actors who are featuring along include Yasir Nawaz himself, Javed Sheikh, Danish Nawaz, Ahsan Khan and Ahmad Hassan.

Neelum Munir seems to be the only female star in the entire film, offering different personas including that of an item number girl as well. Throughout the teaser, one gets to see glimpses of a crime scene involving multiple people, which a team is hell bent upon resolving. As a result, the team is also facing all the possible consequences of solving something like a murder mystery.

The film has been produced under the banner of Farid Nawaz Production in collaboration with Evernew Pictures and will be Yasir Nawaz’s fourth film as a director after ‘Wrong No.’, ‘Wrong No. 2’ and ‘Mehrunisa V Lub U’.

‘Chakkar’ will release on the coming Eid-ul-Fitr and has the majority excited for its incorporation of mystery elements. Many are also wondering if the film will turn out to be successful amidst countless romantic comedies being made.