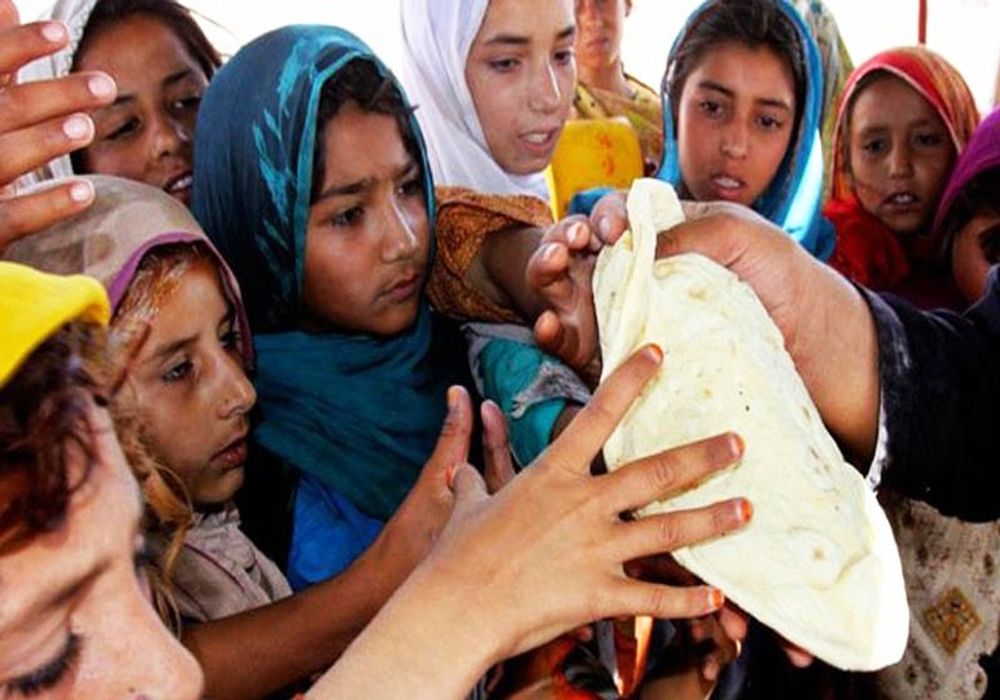 Businesses are struggling under pressures of input costs, bank rate increase of 15% and inflation rate of an average of 25% is bringing down employability of less skilled and illiterate labor force both in industry as well as in agriculture. In context of the remaining six targets of SDG 1, the current floods have shown that the response of the government and the institutions that have to deal with disaster management are insufficient and that family members of the poor and vulnerable and their economic assets are being swept away, pushing them into more poverty. It is estimated that 39.3% of the people of Pakistan live below the poverty line, earning Rs312 a day, and 50% live below Rs500 a day. Almost 80% of the population of Pakistan live at or below the minimum wage of Rs1,000 a day or the poverty line of US $4. This 80% is about 184 million people out of 230 million. With inflation going up to 25%, their daily income of Rs1,000 is eroded and their purchasing power parity comes down to only Rs750 a day. COVID-19 has also not helped the poor people that have been affected, because even if they recovered, their productivity and income earning capacity have drastically diminished, not to mention families where the bread earners have died because of this disease or because of the recent drought and floods in the country, pushing the family into absolute poverty.

It should be noted that we have only talked about economic poverty, or the ability of an individual or household to earn an income equal to their minimum consumption standards. When we add the multiple dimensions of poverty to this equation, the picture becomes more blurred and uncertain for the general population of Pakistan.

Multi-dimensions of poverty are economic dimension â€“ when minimum consumption levels are greater than the income of a family â€“ and political dimension – when institutions made to protect the poor are used to exploit the poor. Others are the social dimension â€“ poverty breeds socially unacceptable behaviours and criminality â€“ and educational dimension â€“ when a large number of children (50% in Pakistan) do not go to school and another 50% drop out of school before class 6, the level of skills given at schools is not good enough to help them earn an income. Moreover, there is the health dimension â€“ when the poor do not have access to cheap, preventable and curable health facilities as well as clean drinking water and â€“ environmental dimension â€“ when poor people living off marginalised land (land that is not productive and healthy) pollute their own environment, because poorer people do not have facilities for sewerage and clean water. Furthermore, there is the judicial dimension of poverty â€“ when the judicial system is so expensive that the poor cannot have access to justice and the historical dimension â€“ historically poor are still poor even today and from slaves they became peasants, then became labor and now unemployed labor. Additionally, there is the human dimension â€“ poor people are not statistics, but humans who see their loved ones die of poverty every day. Racism is also a dimension of poverty â€“when the powerful do not allow people of other races and ethnicities access to income and empowerment.

The federal and provincial governments have no sustainable policies to mitigate threats of climate change, floods, droughts, and other natural or manmade disasters that are affecting the lives and livelihoods of the poor people of the country. Pakistan is going through all three shocks simultaneously: political shock â€“ where the political parties are locked in a struggle for power, ignoring the plight of the people; economic shock â€“ where the economic indicators are not in favour of the general public, rather in favour of the rich and powerful elite; and environmental shock â€“ where drought, floods, and mismanagement threaten whole communities that have to migrate from their places of livelihood.

In this context, the federal, provincial and local governments (when functional) in Pakistan have a duty to help enhance the viability and productivity of their economies, but also to enhance the structures of good governance and transparency in their institutions, increase the skill base and protect the health of their population, mitigate environmental degradation and adverse effects of climate change, promote inter-provincial harmony, gender equality as per the Constitution of Pakistan and promote accountability for their political, judicial and administrative functionaries so that poverty in the country is not only reduced, but safety nets are created that do not let people slide into poverty and that help pull people out of poverty in all its dimensions. Industrialization, institutional robustness, and mass skill-based scientific education of the future generations of Pakistan is an answer through a viable economic and social policy of the government. Otherwise, the downslide of economic, political, and institutional indicators is fast becoming unsustainable. There is a need to abide by the guidelines of the UNO Sustainable Development Goals (SDGs) for achieving the targets by 2030, which is only eight years in the future. With the world economy in recession, out-of-the-box solutions and a wholistic approach are needed to bring the people of Pakistan out of their current predicaments. Be warned that if these issues go on a downward spiral, the trajectory of failure would be catastrophic both in economic terms as well as in social and political terms. Actions, not words, are needed now.