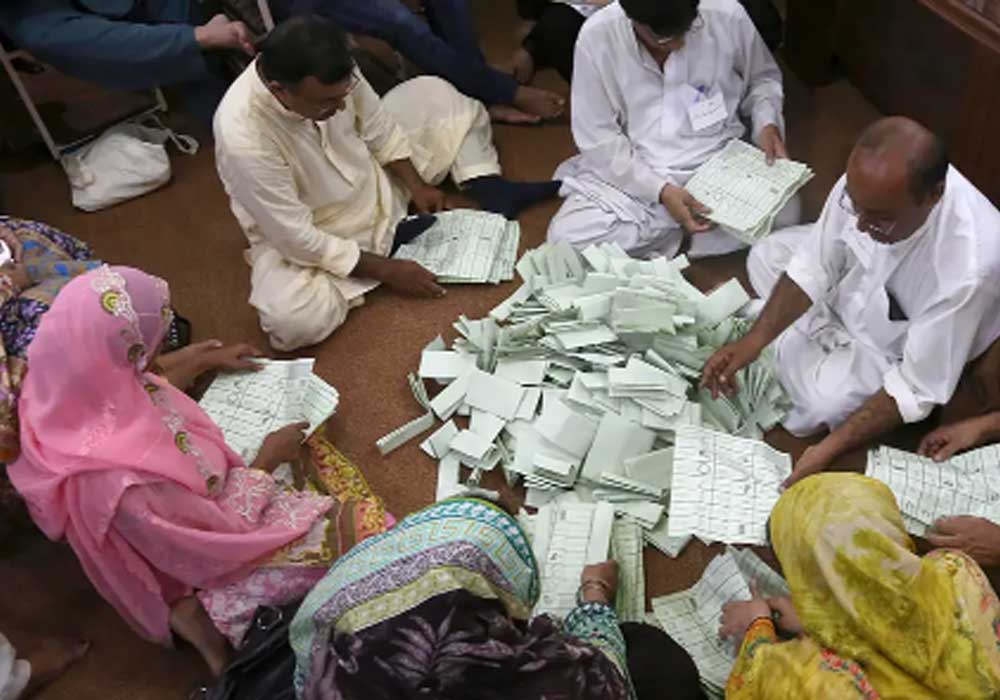 The Pakistan People’s Party (PPP) emerged the biggest winner with 93 seats and the Jamaat-i-Islami a close second with 86 seats as the Election Commission of Pakistan (ECP) on Monday released the final consolidated results of all 235 union committees (UCs) in Sindh’s Karachi division after close to a 30-hour wait.

Polling in the provincial capital was held on Sunday for the posts of chairman and vice chairman.

According to the complete results, the PTI was a distant third with 40 seats, followed by the PML-N with seven seats.

Independent candidates and the Jamiat Ulema-i-Islam won three seats each, the Tehreek-i-Labbaik Pakistan took two seats whereas Muttahida Qaumi Movement-Pakistan secured a single seat for itself, despite an earlier boycott of the local body polls announced by the party.

However, the JI announced a nationwide series of protests and rallies in different cities against what it alleged was tampering with Karachi’s results.

JI Karachi chief Hafiz Naeem claimed that his party secured the biggest number of seats. He alleged that eight seats were “given to the PPP”, saying that the JI had the signed Form 11s of those UCs to prove it. He claimed that the party’s total seats were actually 94 and it had appealed for a recount in 10 seats.

On Jan 15, the second phase of the local government elections in Sindh was held in 16 districts of Sindh – East, West, South, Central, Korangi, Keamari, and Malir of the Karachi division; and Hyderabad, Dadu, Jamshoro, Matiari, Tando Muhammad Khan, Tando Allahyar, Badin, Sujawal, and Thatta of the Hyderabad division.

However, the polls came under a question mark on Sunday night when contesting parties – primarily the PTI and the JI – alleged that the results of the polls were deliberately being delayed in Karachi.

The PTI openly accused the PPP, provincial administration and the electoral body of wrongdoing, warning that any attempt to “change the results” after voting would lead to a strong reaction.

The JI had come up with the same reservations and allegations. Hafiz Naeemur Rehman, the party’s Karachi chief, held at a hurriedly called press conference in Karachi on Sunday night and warned of sieging the polling stations where he said results were deliberately being delayed “to manage things”.

On the other hand, the PPP accused the PTI of violating the rules and going beyond all set rules to sabotage the peaceful process, mainly in Karachi.

In a media statement issued by Sindh Election Commissioner Ejaz Anwar Chauhan, the ECP said the results were being transferred to the offices of returning officers from all polling stations.

“Each union council consists of four wards and around 20 polling stations, and the final result of a UC remains incomplete if a result sheet of even one polling station is left,” the ECP said. The provincial election commissioner informed that each RO had at least five UCs, which “is causing a delay in releasing the poll results”.

Chauhan said the results were being prepared on an excel sheet on computers, reminding critics that there was no result transmission system (RTS) in place during the local government elections.

In a media talk later, Chauhan elaborated that each returning officer had five to six UCs to oversee, which in turn had 5 constituencies. This meant that if an RO had 5 UCs, they had 25 constituencies.

The ECP official highlighted that Forms 11 and 12 had to be prepared for each of those constituencies, terming the process “time-consuming” and involving “extensive labour”. “The election commission is aware of its constitutional duties and is sincere in holding free, fair and transparent elections. We have left no stone unturned in this,” he asserted.

Shortly after the ECP announced final results, wheeling and dealing for the mayor and deputy major of the biggest city of Pakistan picked pace. According to reports, the PTI leadership reportedly contacted to JI chief Sirajul Haq in this regard. Sindh Labour Minister Saeed Ghani said the PPP will not enter into any negotiations with the PTI for securing the coveted position of Karachi’s mayor.

Addressing a press conference at the Sindh Assembly building on Monday, Ghani, who is also the PPP Karachi president, conceded that “no single political party on its own” could secure the mayoral post. He said the people of Karachi had “exposed the reality of the results of rigged general elections held in 2018” by choosing the PPP as the “largest party in the local government polls”.

He also congratulated JI and Rehman for remaining the runner-up in the polls, saying the people of the city had also shown their confidence in the party.

He said the people of Karachi had proved “utterly wrong” the impression that the PTI was the popular political party in the provincial capital.

Meanwhile, PPP Chairperson Bilawal Bhutto Zardari thanked the people of Karachi and Hyderabad who he said helped the party “sweep” the polls.