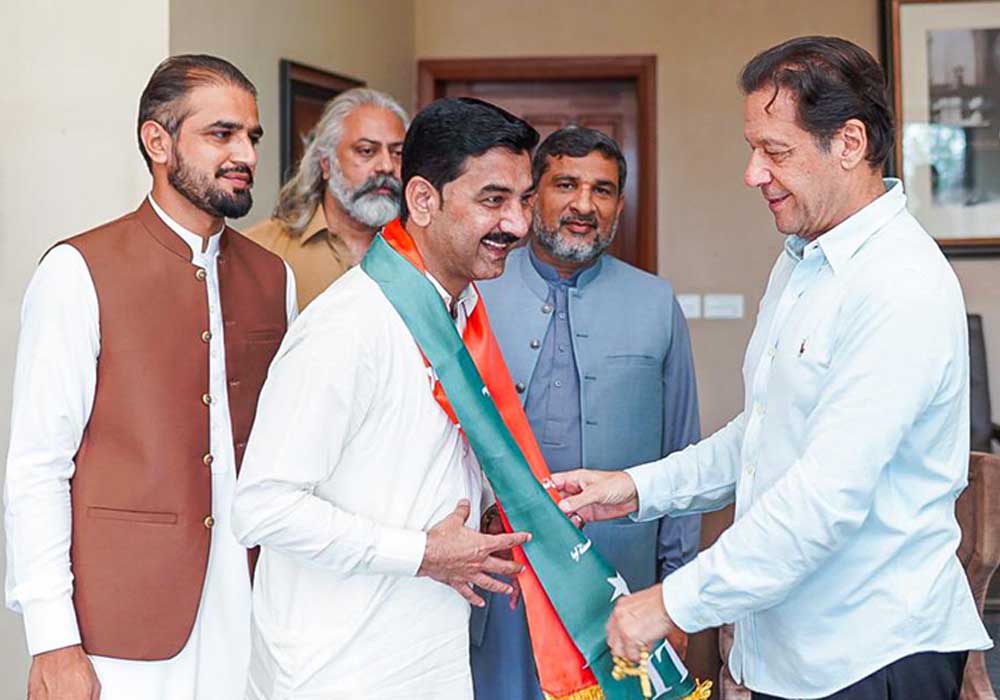 In a major setback to the Pakistan Peoples Party (PPP) in Lahore, its veteran jiyala Israrul Haq Butt parted ways with Bhuttos and joined Pakistan Tehreek-e-Insaf (PTI) on Sunday.

Butt who had been serving as the PPP Lahore General Secretary and vice-president of PPP central Punjab called on PTI Chairman Imran Khan at his residence in Bani Gala and joined the party. His brother Qasiar Butt also joined the PTI.

According to sources, Qaisar convinced his brother to change the party and join the PTI.

Imran welcomed the decision and stood together for a snapshot that was later shared by the PTI’s official Twitter account.

The PTI chief also held a meeting with the Butt brothers and discussed the political situation, while Fawad Chaudhary and other PTI leaders were also present.

The development took place at a moment when only one year has left in the next general elections. His decision to join PTI may dent the PPP’s position in Lahore as the Butt brothers had a huge influence in their respective areas.

It merits mentioning here that the Butt family enjoys a huge vote bank in Lahore’s Manawan and Lakhoder areas. The family is also known for spending hefty amounts on the party’s affairs. In the last general election of 2018, Israrul Haq contested on the ticket of the PPP and secured 10,867 votes.

Now, the brothers may cause political damage to PPP senior leader Samina Khalid Ghurki, who always contested elections from NA-130. Babar Butt, the brother of Israrul Haq Butt, became the only union council chairman of the PPP in Lahore during the last local government polls, who was later killed in an old enmity. But his success as the only UC Chairman of the PPP in Lahore in the last LG polls also reflects the influence of the Butt family in their respective areas.

“I will now sit in Punjab and do politics,” said Zardari, adding that he would strengthen the party together with the workers. As the PML-N came into power, the PPP leadership which announced support for the PML-N in recently held by-polls on 20 seats of the provincial assembly wanted seat adjustment to make its political position strong in Punjab. But the whole scenario changed soon after the PTI won the seats and came back into power.

The PPP leadership last year appointed former premier Raja Pervez Ashraf as the PPP central Punjab president as both Bilawal and Asif Zardari had thought him to be the right person to lead the party in the country’s largest province. But since the day he became the National Assembly speaker, the PPP’s position does not look that strong as he lost interest in the political organisation of the party due to his engagements in Islamabad.

Talking to MinuteMirror, PPP Lahore president Chaudhary Aslam Gill said that the decision of the Butt brothers joining is not good news for them, but it was the right of every person who wanted to change his party.

“We gave respect to Israrul Haq Butt and his family and made him general secretary besides giving him a ticket to contest election on a provincial seat in the last general election. Despite all that, he left the party,” said Gill.

Gill said, “They [Butt brothers] have their right to make any decision. But I have already heard rumours of his decision to join the PTI,”.

When asked why an old associate left the party, he said, “I think it is his brother Qaisar Butt who convinced him to change the party and join the PTI”.

Responding to the impact of the Butt brothers’ decision to leave the party, Gill said, “Many people came and left the party, but the PPP is still here. Mustafa Khar and other big names left, but the party remained strong.”