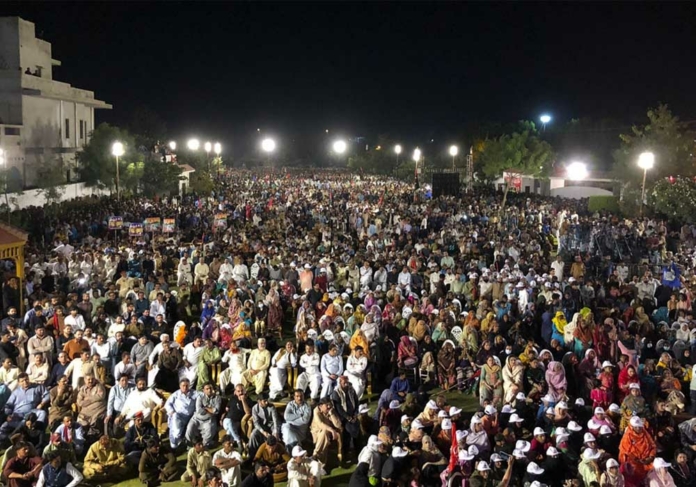 Addressing a big public gathering here at the residence of the provincial Irrigation Minster Jam Khan Shoro on Sunday, the PPP leaders asked former Prime Minister and PTI Chairman Imran not to drag armed forces into politics for his vested interests.

Senator Nisar Ahmed Khuhro, the president of the PPP Sindh chapter, speaking on the occasion said that a person who had done nothing during his tenure in power for over three and half years was now crying hoarse adding Khuhro warned him to mend his ways and stop levelling baseless accusations on the persons of armed forces ” Imran Khan after failing to get any response during his so-called Azadi March is now doing dirty tricks to gain sympathies” he added. He said that despite all such cheap tricks, Imran Khan would neither get public support nor those who had helped him to enjoy power for over three years.

He alleged that Imran Khan not only “stole” precious gifts from Toshakhana but also embezzled the funds he had collected from overseas Pakistan through his telethons for the flood victims of Sindh and other affected areas of the country. “He always tells white lies to dupe the people but he has been caught red-handed in his desperate attempts to blackmail the people,” he said. He maintained that Imran Khan was not only a timid person but always relied on others to prolong his power adding he recalled that their slain leader Ms Benazir Bhutto had bravely faced her political rivals and foiled their attempts to move the no-confidence move against her. He welcomed the clear message of the officials of the armed forces that they had nothing to with the politics and thus gave a loud and clear shut-up call to stop blackmailing them.

Nisar Khuhro Saud that despite the limited resources and massive devastation caused by floods in the entire Sindh, the PPP government under the leadership of Syed Murad Ali Shah had been doing its best to provide all required relief and rehabilitation to people. He said that their party Chairman Bilawal Bhutto had been at the forefront and managed to draw the attention of international aid agencies including the chief of the United Nations towards the devastation and destruction caused by unprecedented catastrophic conditions.

Speaking on the occasion, PPP leader Senator Moula Bux Chandio said that Imran Khan who was daydreaming of politically conquering Sindh had even lost Punjab from his hands where he was unable to get registered an FIR of an alleged attack on him. Senator Chandio said that Imran Khan had never been a political entity and had just been a liability for the clean politics of the country adding he hoped that end of his politics was fast heading towards its logical conclusion. He said that his cronies would only face humiliation if he re-launched his march to gain power adding Chandio advised him to stop duping the people.

Sindh Minister Jam Khan Shoro said that they decided to hold the party public gathering at his residence to answer Imran Khan who, according to him, had crossed all limits of decency and political norms. Shoro made it clear that they would not allow the construction the controversial dams like Kala Bagh Dam and would continue to oppose the new irrigation channels from Thull Canal.