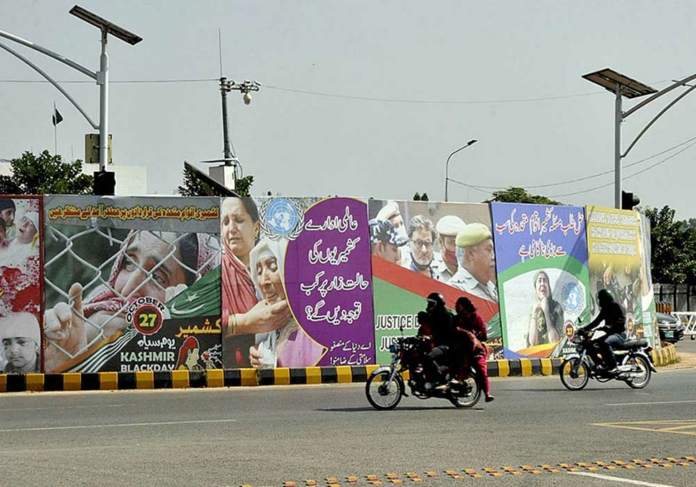 President Dr Arif Alvi has reiterated Pakistan’s call for an immediate reversal of the Indian government’s illegal and unilateral actions of August 5, 2019, urging the international community to take practical steps to hold India accountable for its egregious human rights violations in IIOJK.

The president, in his message on Kashmir Black Day annually observed on October 27, also called upon the world community to play its part in facilitating a peaceful and just resolution of the long-standing dispute of Jammu and Kashmir in accordance with the relevant Security Council Resolutions and the wishes of the Kashmiri people. He said this year, October 27 marked the completion of seventy-five years of illegal occupation of Indian Illegally Occupied Jammu and Kashmir (IIOJK).

He said many generations of innocent Kashmiri men, women and children had known nothing but Indian brutality, bloodshed and torture. The IIOJK remains under Indian military siege, exacerbated by draconian curbs on fundamental freedoms of the people of the occupied territory, he added. President Alvi said the situation had worsened considerably over the last three years with India’s illegal and unilateral actions of August 5, 2019 which stripped Jammu and Kashmir of its special status under the Indian constitution.

“These actions violate the United Nations Security Council (UNSC) resolutions which stipulate that the final disposition of the State of Jammu and Kashmir would be made in accordance with the will of the people of Kashmir through a free and impartial plebiscite to be conducted under the auspices of the United Nations,” he commented. He said currently, Jammu and Kashmir had been subjected to unprecedented restrictions on freedom of speech, fake encounters, ‘cordon-and-search’ operations, custodial torture and deaths.

He said the Kashmiris have also been facing, enforced disappearances, incarceration of senior Kashmiri leadership and young boys, use of pellet guns especially targeting the Kashmiri youth, destruction, and burning of houses to inflict ‘collective punishment’ on the Kashmiris, and other methods of subjugation. He said over 690 innocent Kashmiris have died in extra-judicial killings at the hands of Indian occupation forces since 5th August 2019.

The president said for the last seven decades, the Jammu and Kashmir dispute had been a battle of hope against overwhelming odds, courage against fear, and sacrifice against tyranny. “Our Kashmiri brothers and sisters have displayed exemplary courage and endurance braving the worst forms of persecution. We value the blood of thousands of Kashmiris who have sacrificed their lives for decades in the pursuit of freedom from India’s illegal occupation. Kashmiri brothers and sisters will always find Pakistan voicing the cause of the Kashmir dispute at every available world forum,” the president remarked.

Prime Minister Shehbaz Sharif stressing for the solution of Jammu and Kashmir dispute through the implementation of relevant UN Security Council resolutions has reiterated that Pakistan will always stand by the Kashmiris, no matter what the cost. “The only solution to the Jammu and Kashmir dispute lies in ensuring that the Kashmiris are allowed to exercise their right of self-determination, through the democratic process of holding a UN-mandated free and impartial plebiscite, as espoused in the relevant UNSC resolutions and as per the wishes of Kashmiri people,” he said in his message on the occasion of `Kashmir Black Day’ observed every year on October 27.

The prime minister said, “My message to all Kashmiri brothers and sisters on this sombre occasion is simple: Pakistan will always stand by you, no matter what the cost. We are your voice to the world. Our support and solidarity is abiding. We will not rest until you secure your legitimate right to self-determination. In Sha Allah, that day is not far away!” He said, “Today, with a heavy heart, we mark yet another Kashmir Black Day. On 27th October 1947, seventy-five years ago, India forcibly landed its troops in the Indian Illegally Occupied Jammu & Kashmir (IIOJK) and she continues to forcibly and illegally occupy this territory ever since.”

“To perpetuate its forcible occupation of the IIOJK, India has amassed more than 900,000 armed troops in the territory. Torture, illegal detentions, implication in fictitious cases, indiscriminate use of force under the impunity of draconian laws and systemized campaigns to rob the Kashmiris of their distinct cultural and religious identities mark the reality of India’s brutal occupation of the occupied territory,” he added.

The prime minister said that the situation had further worsened since India’s illegal and unilateral revocation of the special status of IIOJK on 5th August 2019, adding, around 690 extra-judicial killings of innocent Kashmiris have taken place at the hands of the Indian occupation forces in the last three years. “Prominent Hurriyat leaders have been detained illegally or placed under house arrest,” he mentioned.

The prime minister further said that India was also making reprehensible attempts at bringing about demographic changes in IIOJK by issuing fake domiciles, changing property laws, gerrymandering electoral districts, creating new seats for Hindu-dominated regions in the state legislature, and adding non-Kashmiri residents to the electoral rolls. Despite all odds, the valiant Kashmiris continued to defy the Indian bayonets, by rendering invaluable sacrifices, and refusing to accept subjugation as their fate, he added.

The prime minister said that “History is witness to the fact that solemn commitments made by the Government of India to the people of the IIOJK, to Pakistan, and to the international community to abide by and implement the relevant Security Council resolutions have been disowned by the occupying powers.” “History is also witness [to the fact] that India acted insincerely all along, and completely reneged on these solemn commitments,” he added.

The prime minister said that the Jammu and Kashmir dispute had been on the United Nations’ agenda for over seven and a half decades.

He said that Pakistan had remained faithful to its commitments to the Kashmiris and had also consistently raised its voice on the continuing grave human rights violations in IIOJK. “It has also consistently called upon the international community to assume its role and responsibility with regards to IIOJK, raising our voice against the ongoing Indian atrocities in the occupied territory and demanding an immediate reversal of the Indian government’s illegal and unilateral actions of 5th August 2019,” he added.

The prime minister said that Pakistan’s rock-solid support to the Kashmir cause remained as steadfast as ever, adding, “Our greatest asset is the national consensus on this core issue. In fact, love for Kashmir and allegiance to this just cause remains an element of fact in every stratum of our society.” “This was the reason our beloved Quaid referred to Kashmir as Pakistan’s ‘Jugular vein’. It runs in our blood,” he stressed.

Adviser to Prime Minister on Kashmir Affairs and Gilgit Baltistan Qamar Zaman Kaira on Wednesday said Kashmir issue was linked with the sentiments of the people of Pakistan and no government dared to compromise on it and assured them full support in their right to self-determination struggle. Addressing a press conference on the eve of black day, to be observed on Thursday, along with Chairman Kashmir Committee Syed Basit Bukhari and Hurriyat leaders Ghulam Muhammad Safi, Faiz Naqashbandi and Mehmood Ahmad Saghar, he termed the Indian subjugation of Kashmiris a gross violation of Human Rights and stressed for awakening the consciousness of the international community.