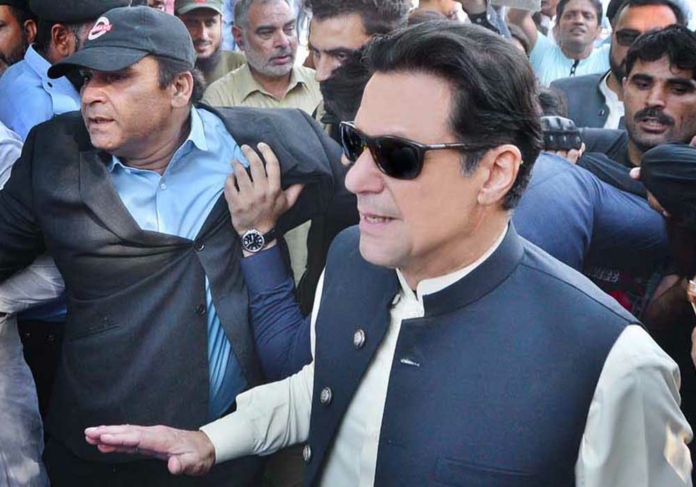 Pakistan Tehreek-e-Insaf (PTI) Chairman Imran Khan has been granted interim bail till October 31 by Special judge Raja Asif Mehmood in the prohibited funding case against him on depositing surety bonds of Rs100,000.

Imran had stated in the petition that his political rivals could not find any corruption charges against him. He also stated that the investigating agency had made hectic efforts for registration of a false case against him after exercising questionable abuse of its power.

Earlier, the PTI chairman had filed a petition through his lawyers seeking the court to stop Federal Investigation Agency (FIA) from arresting him. The PTI chairman was granted bail from Islamabad High Court (IHC) Chief Justice Athar Minallah till October 18 under the condition that he will approach the relevant court upon depositing surety bonds of Rs5,000.

Election Commission of Pakistan (ECP) had stated in its verdict that the party had knowingly and wilfully received funding and was willing recipient of prohibited money of $2,121,500.

PTI has however maintained that the money received was actually donations from overseas Pakistanis that did not fall under illegal funding.

Previously at the time of granting bail, IHC had stated that it would keep the case under trial and will hear the plea if the problem was not resolved at the relevant court.

The FIR has stated that $2.1 million were transferred to PTI account by the Abraaj Group in a bank’s branch at Jinnah Avenue Islamabad. Abraaj Group is already under liquidation due to accusations of fraud. The company was operating on six continents earlier.

The FIR has also stated that more financing was received by PTI from Wotan Cricket Club’s two bank accounts.

FIA has said that the manager of the private bank had helped the agency in probe into the transactions. However, due to 12 suspicious transaction reports not reported by the bank, the manager has also been mentioned in the FIR of FIA.

Sardar Azhar Tariq, Tariq Shafi and Younis Aamir have also been nominated in the FIR whereas the FIA has also declared the affidavit of Arif Naqvi, deposited in the Election Commission of Pakistan (ECP), as false.

FIA summoned PTI leaders for questioning several times but all of them did not show up.