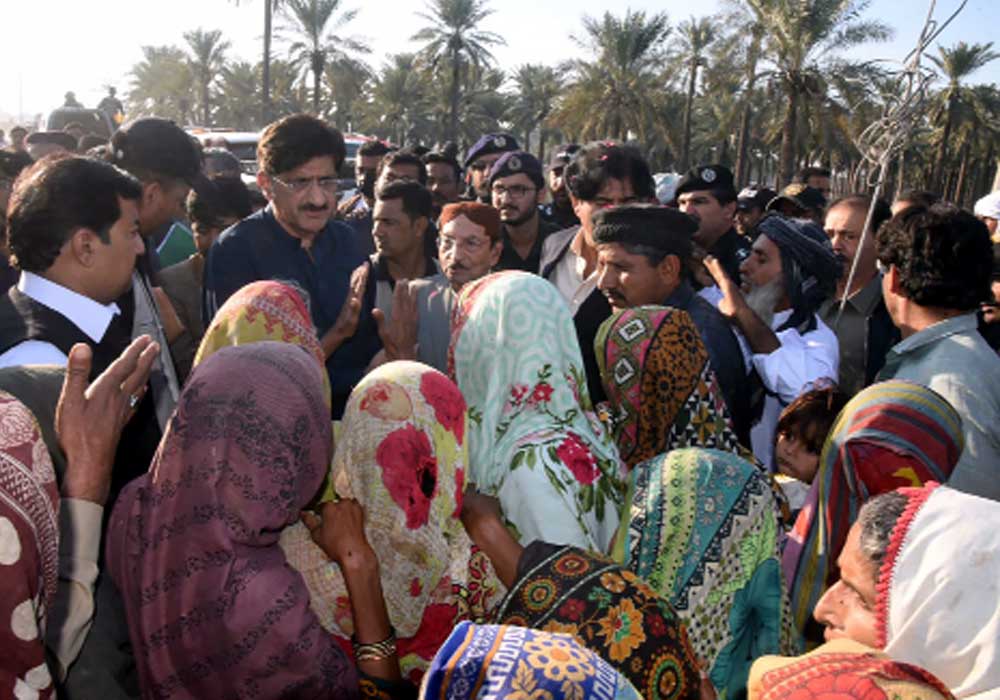 Sindh Chief Minister Syed Murad Ali Shah said that his government is fully committed to helping the flood victims rehabilitate in their areas.

Shah along with former chief minister Syed Qaim Ali Shah on Thursday visited various areas of Khairpur districts and inspected the ongoing dewatering in some areas. He reached Phulpoto village where he offered condolences to the relatives of 21 people of Phulpoto community who lose their lives in a fatal road accident near Sehwan Sharif a few weeks back. Speaking to the relatives, Shah said that the Sindh government has already announced Rs1 million for each victim as compensation.

Speaking to the media during his visit to Khairpur district he said that it was totally wrong accusation that the aircraft of the Sindh government was used in transporting PTI Senator Azam Swati.

He alleged that the present financial crisis was the result of the ill-conceived policies and plans of the previous Imran Khan-led PTI government, according to him, they created the mess during their rule. He said that Sindh government like the federal government would complete its constitutional tenure adding he said that PTI leadership was trying to more mess in the country despite the worsening economic conditions. Murad Shah added that it would be very insane demand to hold elections ahead of schedule. He reiterated despite the all hardships they would provide compensation to all flood -victims for their complete rehabilitation. Sindh Chief Minister Shah also reached Khairpur Nathan Shah’s village Dost Mohammad Bhurgari and condoled with the family members of the flood-affected people who died in Nooriabad bus fire incident. Syed Murad Ali Shah expressed grief and sorrow over the death of 18 people of Mugheri community as a result of the accident.

Speaking on the occasion, the Chief Minister said that the rain was a natural calamity during which people had suffered a lot of loss of life and property and the Sindh government was trying to provide all possible help to the victims. The CM assured that flood victims will not be left alone under any circumstances. On the occasion, MNA Rafiq Ahmad Jamali, MNA Irfan Zafar Laghari, Provincial Advisor for Zakat and Usher Fayyaz Ali Butt, Divisional Commissioner Hyderabad Nadeemur Rahman Memon, DC Dadu Syed Murtaza Ali Shah and other relevant officers and party workers were present.

Later, he also visited the Kali Mori Johi barrage and pumping station near Khanpur and inspected the water drainage. The area people also staged demonstrations during the visits of Murad Shah and alleged that functionaries were least bothered to drain out the stagnant flood-waters from their villages. They said that despite their protests they were also deprived of any relief goods.

The chief minister during his visit to different areas of his home constituency on Friday night said that the government was going to disburse Rs300,000 each among flood-hit families to rebuild their houses, claiming that 80 per cent of floodwater had been drained from all the flooded areas of the province. Speaking to the flood victims at three gatherings held around Manchhar Lake, he said: “I appreciate your patience; I will see your houses ready to live and prepared lands myself again. All your problems will be resolved.” “This year’s rains and floods were the worst in the province’s history,” he said, adding that the water had come down straight from Balochistan to Manchhar Lake due to the slope.

The CM said: “We have been with people since day one to alleviate their problems. Now the people are trying to rehabilitate and help farmers with seed supply.” He said the Sindh government was giving Rs300,000 each to people to rebuild their houses. He said there was definitely a difficult economic situation in the province, but no fear of default. Murad Ali Shah reached Buzdar Village to meet flood victims and listened to their problems. He said that a survey of houses was almost complete and the government would give each family Rs300,000 to rebuild houses.” I understand that Rs300,000 will not be enough,” he admitted. Later, he went to Bubak Town and inspected villages near Manchhar Lake. He met the victims, heard their problems and assured them of his support in their rehabilitation.