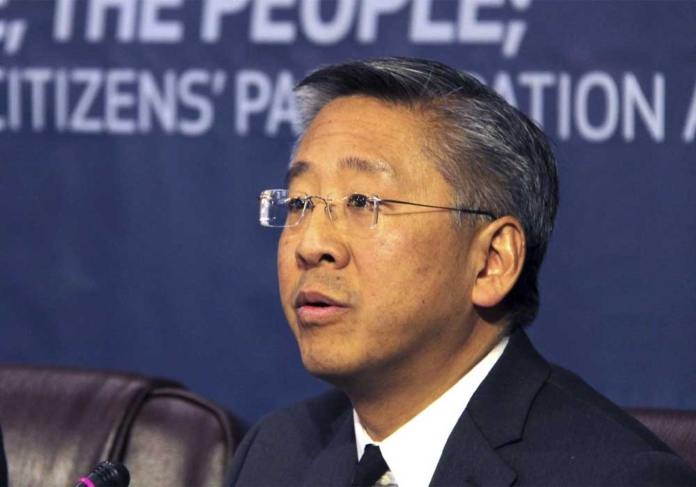 Federal Minister for Defence Affairs Khawaja Asif on Sunday claimed that the Pakistan Tehreek-e-Insaf (PTI) had apologised to the United States’ Assistant Secretary for South and Central Asian Affairs Donald Lu for levelling allegations against him regarding “involvement” in former prime minister Imran Khan’s ouster.

Talking to a private news channel, the minister said, “We (coalition government) have obtained all records regarding the PTI’s apology to Lu. Evidence has been received regarding PTI leaders’ meeting with the US government where they tendered an apology.”

He went on to say that while Imran Khan was shouting slogans against the US during his public gatherings, he was now “apologising for his mistakes”. Asif added that the PTI chairman had sent a message to the US that he wanted to “fix things and his relationship with the superpower”.

Commenting on the leaked audio of former first lady Bushra Bibi – in which she can be heard instructing the PTI’s Dr Arsalan Khalid to run traitor trends on social media – Asif said the PTI could file a petition in the court to get the leaked audio verified through forensics from a third party. The defence minister said if they (PTI) claim the audio of the former first lady was manipulated, they could get it tested through forensics.

Asif said that Imran Khan was attacking institutions because he had lost power, and added that “he should be ashamed of levelling allegations against institutions”.

The defence minister also defended Finance Minister Miftah Ismail’s performance, saying that the difficult decisions taken by him regarding the economy were “endorsed and owned” by the federal cabinet collectively.

He added that criticism of the finance minister from within the party did not mean an expression of “no confidence”. Rather, he said, such “open criticism” was part of the PML-N’s democratic culture that should be welcomed.