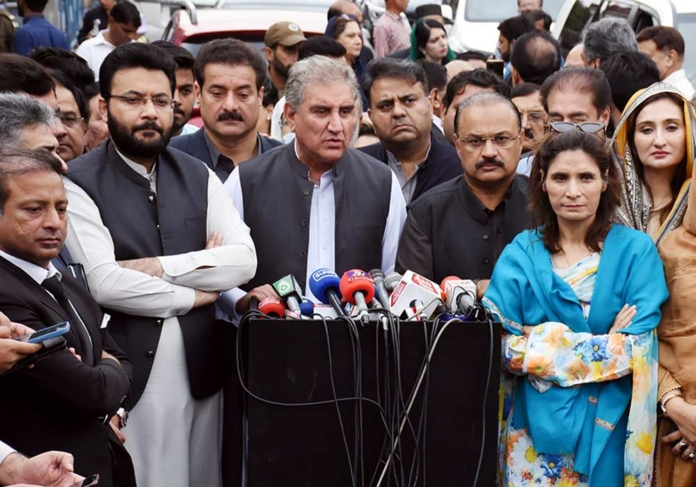 Pakistan Tehreek-e-Insaf (PTI) leaders on Monday approached the Supreme Court (SC) registries in Lahore and other cities with petitions requesting it to form a judicial commission to investigate the assassination attempt on party’s chairman Imran Khan in Wazirabad and other issues.

He submitted that the assassination plot and attempt on Imran Khan’s life, and subsequent refusal to register an FIR as requested by the complainant to include three named identified by the PTI chief as having devised the assassination plot, needed to be probed. He said that on Nov 3, 2022, an assassination attempt was made on Imran during his address to a public rally in Wazirabad, which resulted in the injury of about 14 persons (including Imran Khan) and death of one person, who were participating in the peaceful assembly.

Buzdar said that apart from the commission of a blatant criminal violation of the law, the assassination attempt was a clear attempt to literally eliminate the former premier. He also submitted that this was also a basic violation of the protection of life and security of a citizen of Pakistan as guaranteed under Article 9 of the Constitution.

The petitioner said that in addition, the assassination attempt was also intended to create a psychological fear amongst the public, which thronged the PTI’s long march led by Imran Khan. All this hinders the public at large from the peaceful assembly, therefore, undermining the fundamental right of freedom of assembly of citizens guaranteed under Article 16 of the Constitution, he said.

The PTI leader also said that after the assassination attempt, another grave injustice that continued to fester was that the police had refused to register the FIR according to the request submitted by the complainant.

The police, he said, refused to enter the names of the three persons identified by Imran, who he has stated planned the assassination: Prime Minister Shehbaz Sharif, Interior Minister Rana Sanaullah and DG C Major General Faisal.

Surely, it is an inalienable right of every citizen to enjoy the protection of law and to be treated in accordance with law as guaranteed under Article 4 of the Constitution.

He also pointed out that as per Section 154 of the Code of Criminal Procedure, 1898, an officer in charge of a police station is under the legal obligation to enter the information received in an application-in-writing in a book as a first information report.

The petitioner said that the refusal to file the FIR in accordance with the application received raises some fundamental questions about the law of the land and its selective applicability, which along with being infringement of inalienable rights protected under Article 4 is also an infringement of fundamental right of equal treatment of citizens as guaranteed under Article 25 of the Constitution.

“Are some people, because they hold high political office or are senior bureaucrats in military uniform, above the law and cannot be treated in accordance with the law? Are the laws of the land different for the ordinary citizens and for the ruling elites?” read the petition.

Buzdar submitted that Imran Khan was attacked which was the basic right of the complainant. He also submitted that PTI Senator Azam Swati and his family also suffered as their obscene video was made and sent to his family via cell phone which was very awful.

The petitioner asked the court for an appropriate and timely order for the constitution of a commission in terms of Order XXXII of Supreme Court Rules 1980 to hold public inquiry in the above-said issues and record its findings in a detailed report.

He also asked the top court to investigate the killing of senior journalist and TV anchor Arshad Sharif in Kenya, and made a special request to the Chief Justice of Pakistan to start its hearing on the priority basis.

“Petitions have been filed in different registries of the Supreme Court for investigation of different matters, including the attack on PTI Chairman Imran Khan in Wazirabad,” said Shah Mahmood Qureshi while talking to reporters outside the Supreme Court Lahore registry.

PTI leader and former information minister Chaudhry Fawad also said that the trust in the judiciary was damaged. He said the impression of the judiciary was not going well but the PTI respected the courts. He also asked the top judge “not to weaken the institution of the Supreme Court to the extent that people stop approaching it”.