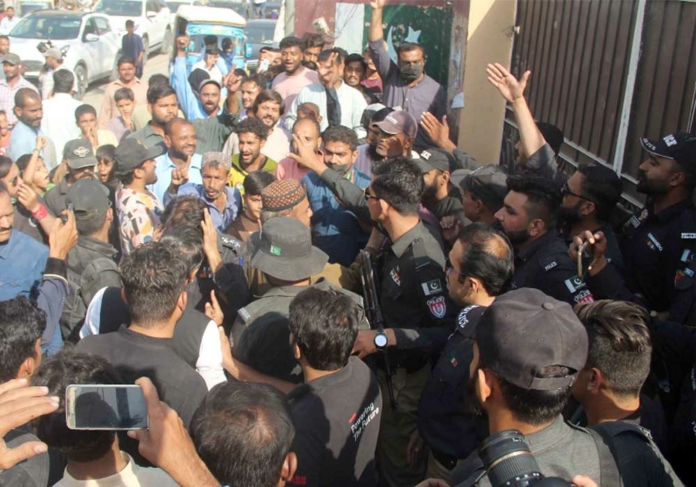 Pakistan Tehreek-e-Insaf (PTI) and Pakistan People’s Party (PPP) on Sunday traded barbs as they blamed each other for rigging during the by-elections on two seats of the National Assembly in Sindh.

Almost five million people in 11 constituencies were expected to cast their votes in high-stakes by-elections on Sunday, described by political pundits as “a referendum” on the popularity of former prime minister Imran Khan. This is seen as a decisive moment in a polarised political environment of the country, with the outcome indicating support for the policies of a beleaguered government or a continued stalemate. Tensions remained high as allegations of electoral rigging surfaced on social media.

PTI’s Ali Haider alleged that PPP leaders were in breach of the electoral commission’s regulations as they apparently roamed around polling stations with armed private guards. The claims were soon followed by video footage of PTI Karachi President Bilal Ahmed Ghaffar which was posted by another party leader and former federal minister Maritime Affairs Ali Haider Zaidi. Ghaffar can be heard saying that PPP workers “threw him to the floor” before 10 to 15 people hit him with bricks.

“Saleem Baloch MPA was the first one who attacked me,” he said, alleging that police “did not respond” as the attack took place. The claims were also endorsed by PTI Sindh’s spokesperson Arsalan Taj who said that “Hakeem Baloch’s son” was behind the alleged attack. Meanwhile, senior party leaders Fawad Chaudhry and Asad Umer also criticised the PPP for attempting to rig the polls as they condemned the attack.

Terming the PPP a “fascist party” Fawad expressed optimism that the “people of Karachi will teach a lesson to the PPP for its thuggery”. Asad Umer also added that “clear signs of large-scale rigging are now visible in Malir area of Karachi”. On the other hand, PPP’s Danial Khokhar claimed that the attack had in fact been instigated by Ghaffar and an aggressive “group” of PTI workers which had also left Khokhar injured. PPP leaders also shared videos of PTI’s Gohar Khatak apparently “threatening” the presiding officers at polling stations.

As the reports caught fire on social media, the PPP candidate Hakeem Baloch reached polling station 123 under fears that the polling may be stopped sooner. It may be noted that the Election Commission of Pakistan (ECP) had earlier announced that by-polls in nine National and three Punjab Assembly constituencies would be held on October 16. Earlier, the polls supervisory body had fixed October 9 for holding by-elections in one national and three provincial constituencies.