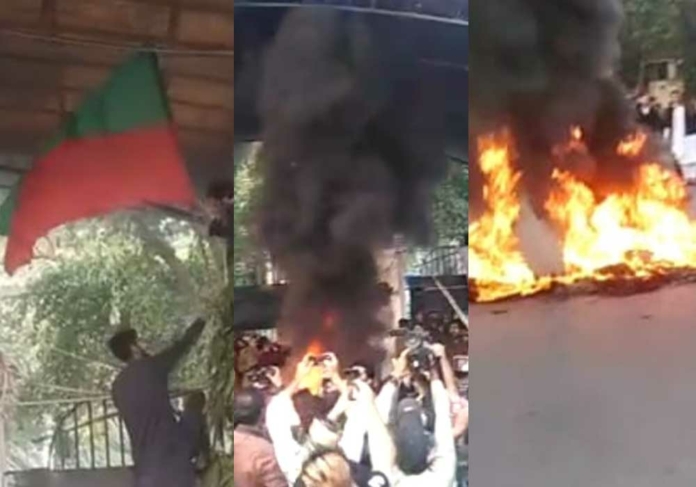 Pakistan Tehreek-e-Insaf (PTI) workers have gathered outside Governor House Lahore for a protest.

PTI workers had gathered at Mall Road in front of the main gate of the Governor House.

The road was closed on both sides for traffic. A large number of PTI workers had gathered upon their party’s call of protest.

A container was also brought to the scene for PTI leaders to address the protesting workers. PTI’s senior leadership from Punjab Dr Yasmeen Rashid, Mian Aslam Iqbal, Mehmood-ur-Rasheed and Musarrat Jamshed Cheema were present at the container.

Senior PTI leaders including Asad Umar have also been expected to reach the protest and address the protestors.

Punjab police had also deployed a large number of personnel including anti-riot force and women police officers to maintain the situation. According to reports more than 200 police personnel have been deployed to maintain law and order situations.

Previously, PTI workers had climbed the gate of Governor House Lahore and hoisted their flags. The reception office and other property were also damaged a few days earlier in PTI’s protest after former prime minister Imran Khan was shot during a rally in Wazirabad.