Protesters try to barge into ECP office in Peshawar 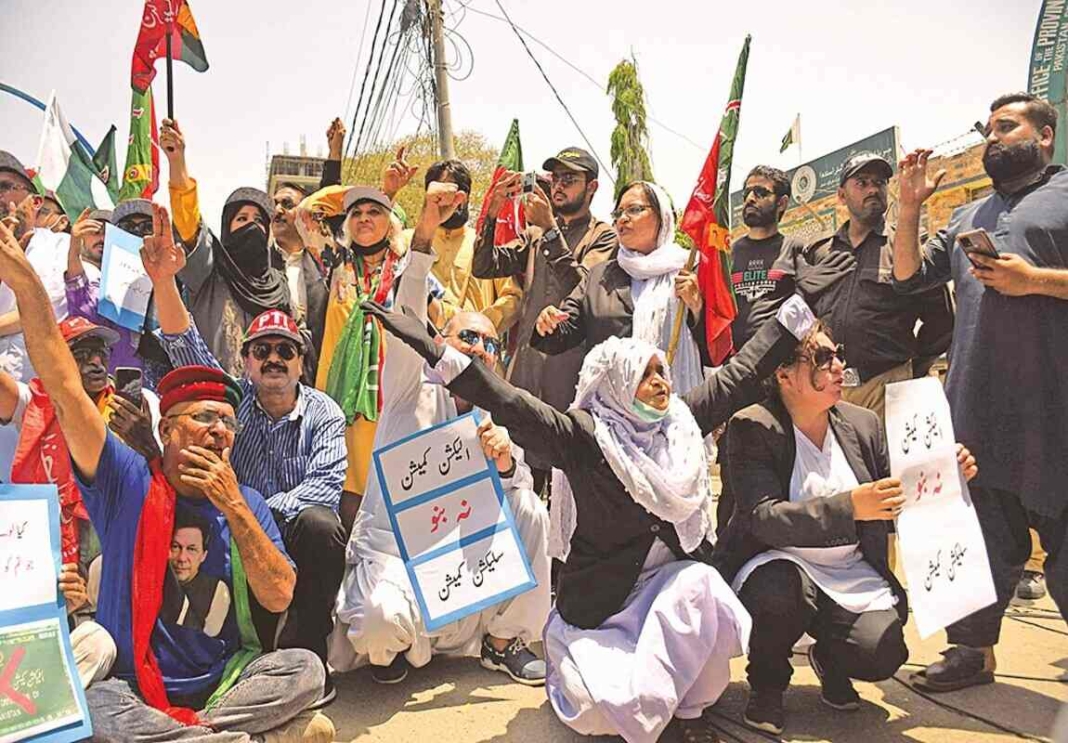 Television footage showed demonstrations were held in Karachi, Lahore, Islamabad, Peshawar, Gujrat and Faisalabad, among other cities. In Karachi, police were deployed outside the Election Commission of Pakistan (ECP) office in Karachi ahead of the protest and three mobile vans were present at the site as part of security arrangements.

According to a statement issued by PTI spokesperson Saddam Kumbhar, Opposition Leader in Sindh Assembly Haleem Adil Sheikh and other party leaders, including Firdous Shamim Naqvi, Bilal Ghaffar, Aftab Siddiqui, Raja Azhar and Saifur Rehman, were among the demonstrators.

Chaos was witnessed outside the ECP office in Peshawar as PTI members attempted to barge into the building. They were stopped by police deployed outside the ECP office’s gate. PTI lawmakers from the Khyber Pakhtunkhwa Assembly, including Zahir Shah and Abdul Salam, were among the protesters who raised slogans against the CEC, calling him biased. They questioned why only the PTI’s funding was being investigated while other parties were not facing similar probes.

Meanwhile, in Islamabad, former interior minister Sheikh Rashid and PTI leader Shibli Faraz spoke to the media during the protest out of the ECP office. Amid loud slogans by the demonstrators, Faraz said while his party was staging a “symbolic protest” outside the ECP office in the capital, thousands of party members were unable to reach the site of the demonstration as “routes have been blocked”. The PTI leader further criticized the incumbent government for removing several names from the Exit Control List (ECL).

“The way they have removed 3,000 names from the ECL, I would suggest that they even open the gates of the Kot Lakhpat Jail,” Faraz said.

For his part, Rashid said even if the “government and entire establishment come together, they cannot stop the elections from taking place”. He went on to say: “Our position was not as good as it is now because of these fools.” In Lahore, a large contingent of police was deployed outside the ECP office and barriers were placed as citizens were barred from entering the building. Addressing the protesters outside the ECP office, PTI leader Mehmoodur Rasheed demanded that “turncoats [in the party] be de-seated and preparations be made for the next elections”.