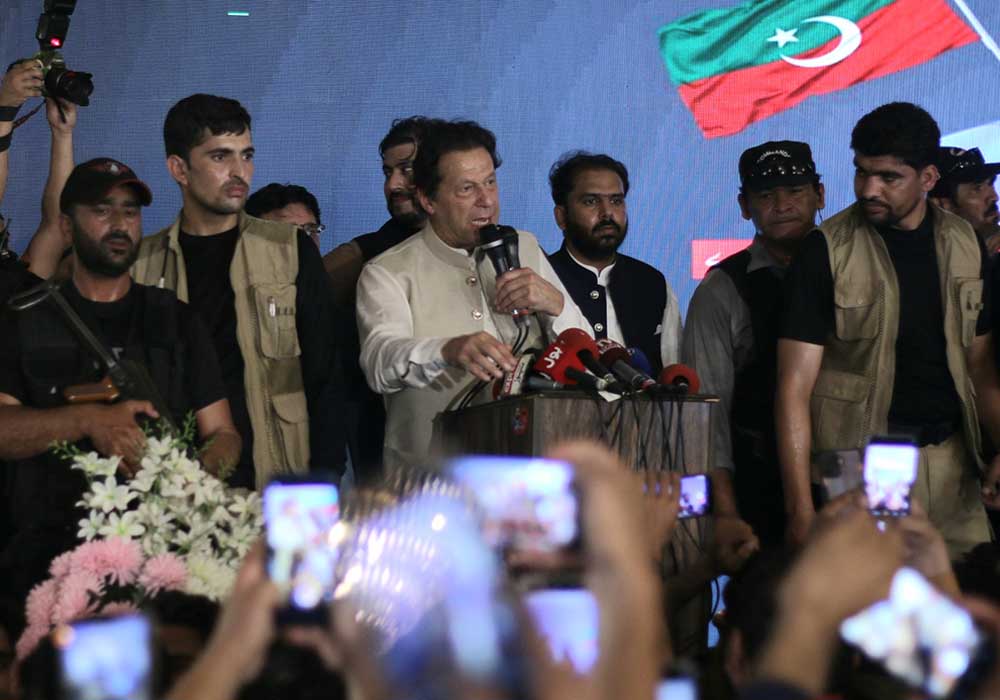 Pakistan Tehreek-e-Insaf (PTI) chairman and former prime minister Imran Khan targeted “defectors” of his party during his visits to four constituencies of the provincial capital where by-polls would be held next month on July 17, urging the voters not to vote the ‘turncoats’.

Imran Khan also claimed that the PTI would defeat the defectors despite the fact that “they enjoy the support of the umpire”. “Are you ready to defeat these lotas [defectors]?” asked Imran Khan addressing a charged crowd in PP-168 in Lahore on Sunday. He gave a special message to the youths of the constituency, saying that those people who sold out their conscience and became “lota”, humiliating the people of their area must be defeated.

Addressing Malik Nawaz Awan, the party’s candidate in PP-168, Imran Khan said that he just wanted “bravery” from him. “What they [the government] are doing is meant to make people afraid. Malik Nawaz, understand this! I’m standing by you. We are ready to face all these things,” said Imran. Lashing out at PML-N leadership, especially Prime Minister Shehbaz Sharif and Punjab Chief Minister Hamza Shehbaz, he said they had violated the sanctity of the law of the land and came into power through a foreign conspiracy.

During his address in PP-158, Imran Khan said he is optimistic that his party would defeat the ‘thieves’ in the Punjab by-polls despite “they having the support of the umpire”. He said the turncoats would never succeed in the upcoming by-polls in their constituencies. “It is not the election of a single constituency but the election of Pakistan. Thieves have been imposed upon us but the nation is now reacting against them,” said Khan.

He said that “these thieves can only win [the elections] with the support of the umpire,” vowing that they had to defeat them by enjoying the support of the ‘umpire’. He also said that the whole nation was watching the fate of the by-polls and criticized the Election Commission of Pakistan, saying that it had lost complete confidence as it was no more impartial. Khan said, “the upcoming by-election will predict the result of the next general elections,” claiming that he knew who was supporting these thieves.

“ECP is fully partial,” he claimed. He urged the party workers to run an effective election campaign and asked them to keep an eye on all the polling stations. Calling the present rulers slaves of the United States, the PTI chairman said that they would defeat these “slaves and dacoits”. Khan also came down hard upon the incumbent government for massive inflation and increasing prices of petroleum products following the demands of the International Monetary Fund (IMF). He said the government would do everything the IMF demanded.

He went on to say that the defectors humiliated the people’s mandate by selling their conscience, and urged the female workers to convey his message to the people of the constituencies that the turncoats did not deserve their votes. Talking about police, Imran Khan said the police were trying to pressurize people ahead of the by-polls but the people would beat the fear and never support the “imported government”.

“If you (police) do not perform your duty with honesty, people are watching you and they will never forgive you,” he added while warning the IGP, saying that “your [IGP] image will be ruined and people will blame you for the rest of your life”. Turning his guns towards Maulana Fazlur Rehman and Bilawal Bhutto over inflation, the PTI chief said they had been protesting against inflation just a few months back but now the truth has come out as the incumbent government has caused high inflation in just two months. He warned more inflation would come.