The visit of Saudi Crown Prince Muhammad Bin Salman (MBS) might be delayed due to Pakistan Tehreek-e-Insaf (PTI) Chairman Imran Khan’s announcement of the long march to Islamabad on Friday.

A media report has stated quoting official sources familiar with the development that the Saudi Crown Prince’s expected visit in November might be put on hold.

Imran Khan announced the much-anticipated long march yesterday. He had said that there was no timeframe for when the march would reach Islamabad. He announced that he would lead the long march from Lahore to Islamabad along the Grand Trunk (GT) Road.

According to a media report, the date of the long march might coincide with the Saudi Crown Prince’s visit that he will be doing upon the invitation of Prime Minister Shehbaz Sharif. PM Shehbaz had invited Muhammad Bin Salman for a visit to Pakistan during his visit in July.

Financial bailout packages and the revival of certain projects shelved during PTI’s government are expected during the crucial visit. Saudi authorities have been in touch with Pakistani authorities for the finalization of dates but they were also keeping a close eye on the political situation here including the PTI’s long march.

In case of PTI’s announcement of a sit-in, the visit of the Saudi Crown Prince may be rescheduled.

It is also important to understand that no foreign dignitary would visit Islamabad amid such political uncertainty. Just like the Chinese President’s scheduled visit in 2014 was cancelled due to political unrest.

According to reports, the Chinese ambassador had even contacted Imran Khan to suspend the protest for some days so that the President’s visit could take place. But upon Imran’s refusal the visit was cancelled.

The government has been keen to revive the multibillion-dollar investment plan that would be announced during the Crown Prince’s visit. Saudi Arabia was to set up an oil refinery with an investment of $10 billion. Pakistan is meanwhile pushing for Pakistan, Saudi and China’s tripartite agreement for the oil refinery. 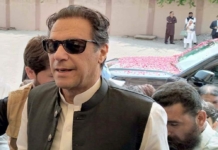