Voting on no-trust motion against Mazari also on the cards 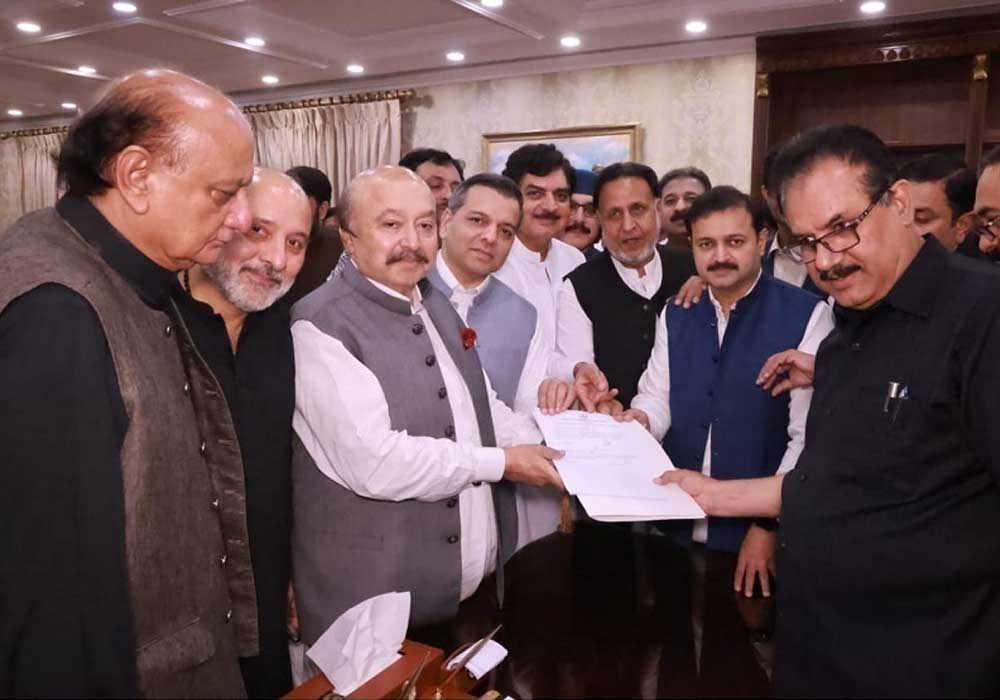 The Punjab Assembly will elect its new Speaker on Friday (today) through secret balloting while voting on a no-trust motion against Deputy Speaker Sardar Dost Muhammad Mazari will also be held today.

The Speaker’s office fell vacant after Ch Parvez Elahi’s elevation to the Chief Minister’s office and PTI has also planned to oust Deputy Speaker Mazari for supporting the PML-N. Former opposition leader Sabtain Khan Niazi is the candidate of PTI and PML-Q while Malik Saif ul Malook Khokhar will contest as the joint candidate of PML-N and PPP.

Both the candidates submitted their nomination papers on Thursday and voting will be held today at 4 PM in the House. During the session on Thursday, the schedule was announced by the Panel of Chairman Nawabzada Waseem Khan Badozai.

Former Minister for Law and Parliamentary Affairs Raja Basharat moved a resolution to suspend the rules that were endorsed by a majority of the House. Later, he moved another resolution citing “The Speaker office fell vacant after Ch Parvez Elahi got elected as Chief Minister”. He also suspended the rules of procedure 11 (1) and 12 (3). The said rules authorize the Governor to summon the session of the Punjab Assembly to elect a Speaker whenever the office is vacant.

Since the incumbent Governor is from PML-N and he has already refused to administer the oath from Elahi as CM, the government decided to suspend the said rules related to the powers of the Governor for summoning the session for the election of Speaker. PML-N Chief Whip Khalil Tahir Sandhu also raised objections over announcing the schedule without getting approval from Governor. The schedule said that the election of Speaker will be held while voting will also take place on the no-trust motion already submitted against Mazari.

It is worth mentioning here that 186 members are required to elect the Speaker and pass the no-trust motion against Mazari. The PML-N and its allies have shown the figure of 179 during the election of Chief Minister while PTI and PML-Q have the support of 186 MPAs. Although, PTI is ahead in numbers and an upset cannot be ruled out as the voting will be held through secret balloting. Earlier, the names of Sardar Awais Laghari and Syed Hassan Murtaza of PPP were under consideration but Khokhar was finalized at the eleventh hour. Khokhar is considered close to the camp of Maryam Nawaz and his family is one of the richest families in Lahore. The Khokhars are known to spend hefty amounts on the public rallies of PML-N and Saif Khokhar’s entry raises eyebrows. The insiders believe that Khokhar may buy a few votes for his election and can give surprise many observers today. PPP’s Ali Haider Gillani was seen having deep conversations with Khokhar in Punjab Assembly.

“We can get 15-20 votes of PTI from the MPAs who are not satisfied with the policies of Imran Khan,” Gillani told reporters outside the Punjab Assembly. It is pertinent to mention here that Gillani was also active when his father Yousaf Raza Gillani was contesting as Senator despite the fact that he didn’t have the required numbers. Despite being short in numbers, Yousaf Raza Gillani became Senator from Islamabad which was a bombshell for PTI at that time.

On the other hand, Sabtain Khan ruled out any chance of an upset as he said that he will become the new Speaker and Imran Khan has reposed his confidence in him. It should be noted here that incumbent Chief Minister Ch Parvez Elahi had grabbed 201 votes when he got elected as Speaker Punjab Assembly in 2018. As it was the secret balloting, Elahi had managed to get 15 more votes than his numbers. Then CM Buzdar could manage only 186 votes at that time and Elahi got 201 votes.