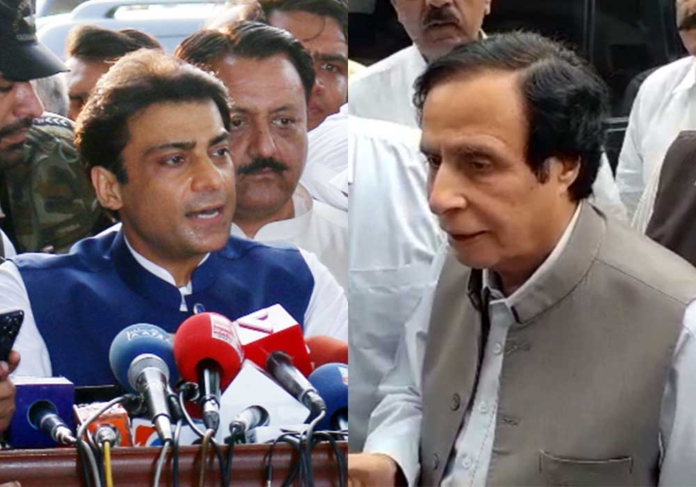 An SC bench headed by Chief Justice Umar Ata Bandial took up the appeals filed by the PTI and the PML-Q challenging the verdict of the Lahore High Court (LHC) regarding the recounting of votes for the slot of the Punjab chief minister.

The Punjab Assembly session for the election of the CM could not take place in light of the Lahore High Court’s verdict after the apex court resumed hearing on Friday.

During the proceedings, CM Hamza Shehbaz and Punjab Assembly Speaker Parvez Elahi appeared before the top court’s Lahore registry via a video link in compliance with its order. Dr. Babar Awan, Imtiaz Siddique and others were representing the PTI and the PML-Q at the principal seat of the top court.

Elahi initially agreed to let Hamza remain as the chief minister until July 17, but the idea did not sit well with the PTI. At this, the SC asked Elahi to talk to PTI Chairman Imran Khan and come up with a solution and briefly adjourned the hearing. After a while, Advocate Babar Awan, who was representing the PTI, said Imran Khan had agreed that Hamza could remain in office, and thus all parties agreed to the idea.

Babar Awan had earlier informed the top court that all PTI lawmakers were not present in Lahore, as some of them had gone to perform Hajj, while others were busy with family events. At this, Justice Ijazul Ahsan, who was also a member of the bench, observed that he did not agree with the point of waiting for the voting process due to the absence of some members.

The CJP asked why the Supreme Court should interfere in the matter and whether the PTI wanted the court to give it more time. “Should we intervene in Lahore High Court’s decision?” asked the top judge. Addressing the PTI’s lawyer, the CJP also asked whether they (the PTI) were ready for the election, as the Lahore High Court had ordered the recounting of votes on Friday. On it, the counsel replied that they needed seven days.

Meanwhile, the CJP asked him whether the lawmakers who were present in the country could have reached Lahore within a day.

He asked the lawyer about the time required for PTI lawmakers to reach Lahore. “What is your request? Do you want seven days’ time without any chief minister in Punjab?” Justice Bandial asked. “Who would run the province if the CM is not in office?”

Justice Ijaz asked the PTI lawyer whether the session could be held at 4 pm on Friday because then they would decide its fate. Advocate Faisal Chaudhry, also representing the PTI, said that the party had 169 members even after the exclusion of 25 dissidents. At this, the CJP remarked, “It means you don’t have a majority?”

On it, Faisal said that nobody had a majority in the provincial assembly. Another lawyer, Advocate Imtiaz Siddique, said there was another option of a governor who could look after the provincial affairs until the reelection of the CM.

At this, Justice Bandial observed that by-polls on 20 seats would be held on July 17. He remarked that they knew about the PTI’s concerns but they did not want the province to be left without its chief executive. He also remarked that all parties would face trouble if they did not agree on the point of re-polling.

Elahi said that both sides could come up with a mutual decision after consultation.

At this, Justice Ahsan observed that they (Hamza and Elahi) should have come to the court after consultation.

Justice Ahsan also asked Hamza what he wanted to say. On it, he replied, “The country’s system should work without any hindrance.” He said they were ready for the election on Friday, claiming that their numbers were complete.

At this, Justice Ahsan remarked that the time set by the Lahore High Court was now over, warning that the judges would give their decision if the parties failed to reach any consensus. On it, Hamza told the court that an election could be held on July 17.

At this, Justice Ahsan asked him whether he could remain out of the CM’s office until that day. On it, Hamza said that the parties could not reach a consensus so far and the court should decide the matter regarding reelection. The bench then asked Elahi about his opinion, who said he would accept whatever the court announced. Elahi asked the court for assurance that no opposition member would be arrested if the polling date exceeded.

At this, Justice Ahsan remarked that all the matters could amicably be resolved if Elahi accepted Hamza as the chief minister until July 17.

Elahi had earlier said that they were not ready to accept Hamza as the chief minister.

But Justice Ahsan made it clear to Elahi that he had two options; either accept Hamza as the CM or give a date for the reelection. The bench also assured Elahi that no arrest would be made. At this, Elahi agreed that Hamza could retain the chief minister’s office until July 17. Babar Awan, however, disagreed with the consent of Chaudhary Pervez Elahi, saying that his party would not accept Hamza as the chief minister. Elahi then consulted the PTI chairman and reached a consensus.