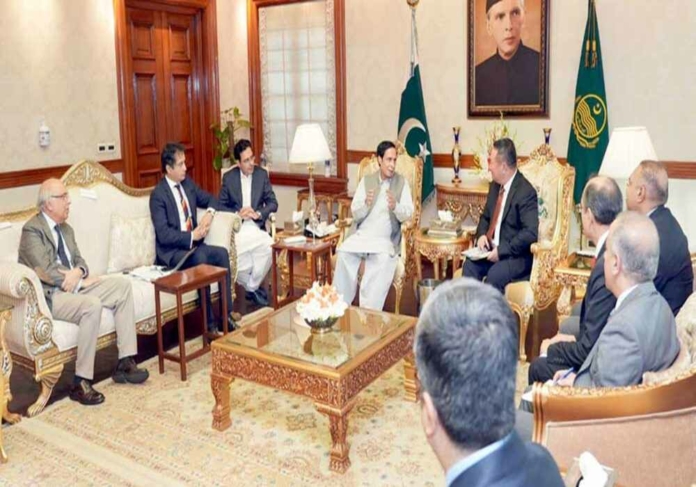 Punjab Chief Minister Chaudhry Parvez Elahi and former federal minister Moonis Elahi on Saturday met an Asian Development Bank (ADB) delegation headed by the Country Director Yong Ye at his office in which matters pertaining to progress on the ongoing various projects with the cooperation of ADB in Punjab along with launching Blue Line underground project in Lahore came under discussion.

It was principally decided during the meeting to extend cooperation with regard to the Blue Line underground project between the Punjab government and the Asian Development Bank. The country director of ADB gave assurance to extend cooperation for the Blue Line underground project and the matter relating to Sutlej Corridor Project from Kasur to Bahawalnagar also came under discussion during the meeting.

The CM while talking with the ADB country director stated that “we are keen to avail the cooperation of Asian Development Bank” to launch the Blue Line underground project.

He stated that the ADB was an important partner of the Punjab government and disclosed that he had formulated a plan to run underground train with the cooperation of ADB during his previous tenure. He denounced that the PML-N government had rendered his project to political prejudice and destroyed the beauty of Lahore city by launching the Metro Bus Service. The CM censured that the former PML-N provincial government had built transport projects on the basis of their vested interests. He emphasized that Lahore needed underground transport earlier and is in dire need of it at present.

He remarked that we will be pleased if the ADB provides technical assistance for launching the Blue Line underground project. The CM highlighted that our government has decided to launch the Blue Line project in order to provide latest and international quality travel facilities to the people adding that this project will prove to be a milestone for Lahore. The CM outlined that we will welcome the cooperation of ADB with regard to the completion of Thal Canal project and the Punjab government will take every possible step for the early completion of this project. The CM lauded the cooperation of ADB for the rehabilitation and settlement of the flood victims.

The CM revealed that our government disbursed Rs12 billion package for the rehabilitation and settlement of the flood-affected people. He reprimanded that the Federal government did not pay even a single penny for the flood-affected people of Punjab adding that we are extending maximum help to the flood victims from our resources. He stated that we will welcome the cooperation of ADB for the construction of a corridor from Kasur to Bahawalnagar.

He was chairing the sixth meeting of the LDA governing body here on Saturday in which the Water and Sanitation Agency (WASA) had been directed to improve its performance.

He said that WASA would have to keep itself abreast of the latest requirements by shunning its traditional manner in order to timely resolve problems of the citizens. He vowed to transform WASA so as to make it a public service institution in a true sense.

He stopped WASA from collecting sewerage charges from mosques and accorded approval to make necessary amendments in the rules and regulations for the construction of new schools.

Approval was granted to make amendments in the rules for the legal advisors, consultants in the WASA and in the law firm. He directed to settle the issue relating to the allowance of LDA engineers and accorded approval to upgrade the posts of tube well operators during the meeting.