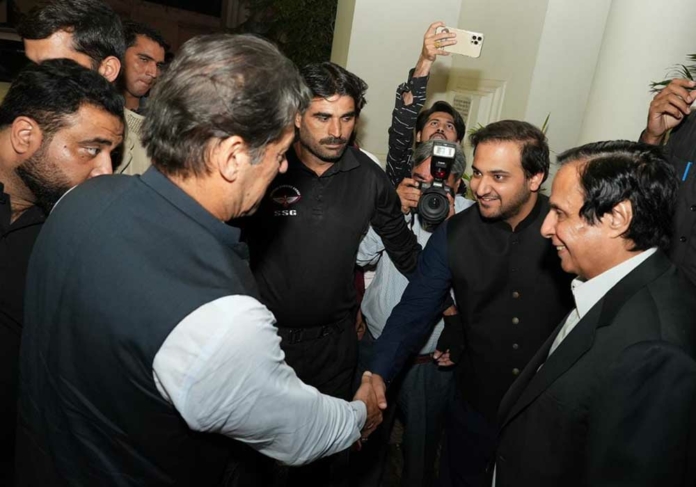 Addressing the parliamentary party meeting at Chief Minister’s Secretariat, the former prime minister said that he knows very well how to achieve his target.

“We defeated them in the recently held by-polls despite the fact that they were supported by the Election Commission of Pakistan (ECP),” said Imran Khan a day after he announced that PTI’s long march will begin from Lahore on Friday.

The MPAs assured Imran of their full support for the long march. The provincial lawmakers said that they will stand by Imran Khan till the end.

Speaking on the occasion, the PTI chief said that the incumbent federal government had miserably failed on every front, reiterating that his long march is ‘Jehad’ for the ‘haqeeqi azadi’. “The long march will create history.”

The long march of the PTI will start from Lahore’s Liberty Chowk. According to the schedule, the march will make a stopover in Shahdara during the night and will leave Lahore the very next day. It has also been decided that the marchers won’t travel during night to avoid any untoward incident.

From Liberty to Shahdara, Imran will make a series of addresses at Ichhra, Mozang, Data Darbar, Azadi Chowk and Shahdara.

Meanwhile, the container of Imran Khan reached Liberty roundabout that remained the centre of attraction throughout the day.

Govt to call in army

Separately, Interior Minister Rana Sanaullah Wednesday said that the federal government would call in the armed forces – including the Pakistan Army and Rangers – to deal with any untoward situation during PTI’s long march

Speaking to a private TV channel, Sanaullah said that the government will take PTI’s march and its participants head-on by ensuring all possible security measures for the maintenance of law and order.

“Yes, surely we will call [in] the army under Article 245 [of the Constitution]. Police and FC will form the first line [of defence] and they will be armed with teargas [shells] and rubber bullets to control the mob,” Sanaullah said.

Sanaullah also hinted at arresting the PTI chief and added that PML-N worker’s help may also be sought if chaos ensues.