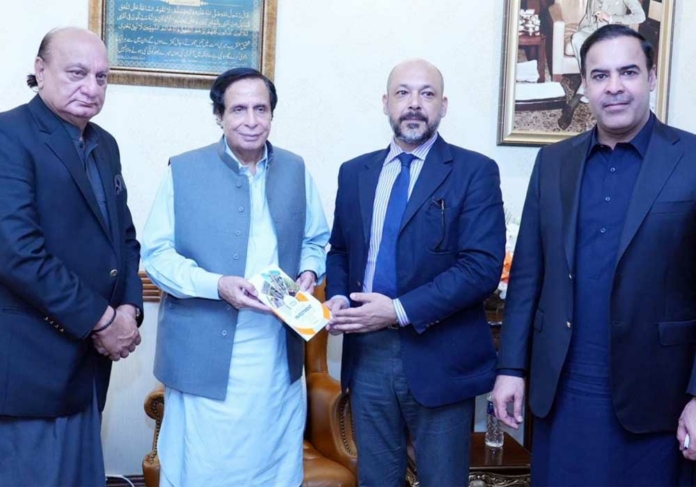 Chief Minister Punjab Chaudhry Parvez Elahi said on Thursday that Punjab is the safest and best province for investors today.

“One-window operation has been started for the convenience of investors and the government is facilitating the investors and public at all levels,” he stated and appreciated Punjab Board of Investment and Trade (PBIT) for attracting foreign direct investment through rapid industrialization and special economic zones. CEO of PBIT and Secretary Special Economic Zones Authority Jalal Hasan met Chief Minister Punjab Chaudhry Parvez Elahi at his office and presented Punjab Investment Catalog, 2022 to him.

Jalal Hasan also briefed the chief minister about steps to encourage foreign investment. The CM appreciated the work done by PBIT to compile the catalogue and noted that Punjab is taking the lead in investment promotion by providing facilities under one roof. “Increased investment will create new employment opportunities,” he said while regretting that the PML-N government had not taken any steps to promote investment.

Also, Chief Minister Elahi chaired a meeting of MNAs and MPAs of Gujranwala and Sahiwal divisions to discuss the political situation, constituency-related development schemes and long march. Speaker of Punjab assembly Sibtain Khan was also present on the occasion. The CM deplored that the “imported government” has destroyed the economy while PTI Chairman Imran Khan is “struggling to save Pakistan”. The nation stands with Imran Khan and an “incompetent” government will not be able to stand in front of the sea of people, he said.

The CM assured of early resolution of public issues and said that the ongoing projects will be completed soon. He ordered the release of funds to Sialkot Women University and added that matters pertaining to Sialkot THQ Hospital be disposed of without any delay. He also ordered measures to facilitate the visitors at the shrine of Hazrat Baba Farid Masood Ganj Shakar (RA) in Pakpattan. The shortage of doctors, teachers and police in Sahiwal and Gujranwala divisions will be met, he assured.

Besides this, a water filtration plant will be installed in Malka Hans, a veterinary university campus will be established at Sahiwal and Burewala-Chichawatni dual road will be constructed, the CM said. Similarly, roads, paved streets, sewerage and other projects will be completed in Sahiwal and Gujranwala. PHA in Sahiwal will be made more effective, he concluded.

Separately, while expressing his complete solidarity with the oppressed people of Illegally Occupied Jammu & Kashmir, Chief Minister Elahi called upon the world community to take notice of the inhumane treatment being meted out to the people of the occupied valley. In his message on Black Day, being observed by the people of occupied Kashmir, the chief minister said that the day was a black chapter in the history as the Indian forces occupied the state forcibly without any legal justification on the same day 74 years ago.

The people of the occupied valley had been subject to state terrorism for more than seven decades, but they were standing firmly for their just right to self-determination. The Indian government had committed international human rights violation by changing the legal status of the occupied Kashmir, he said adding that the Narendra Modi government was committing genocide of innocent Kashmiri people in the valley. The chief minister said that real face of so-called world’s largest democracy had been exposed before the world.