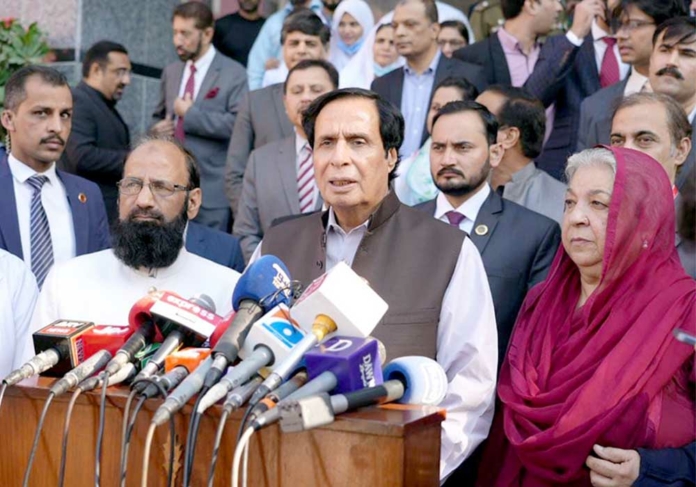 While speaking to media on Sunday, Punjab Chief Minister Chaudhry Pervaiz Elahi said that the provincial government will “protect” Pakistan Tehreek-e-Insaf (PTI) chief Imran Khan ahead of his long march towards the capital.

While responding to a question by a journalist about what the PTI’s long march is to achieve, the CM said that “you will see full well what the march has achieved in the coming few days”. “Look at the faces of the PML-N [Pakistan Muslim League-Nawaz] leaders,” he continued, “they look like a destroyed field so that should be sign enough of what their situation actually is.” Responding to another journalist’s question about Imran Khan’s anti-establishment stance, Elahi said “you have not heard what he is saying at all, just yesterday he said that the establishment had no role to play in the attack on me [Imran] nor in toppling my [Imran’s] government.”

Criticising the PML-N government and in particular Prime Minister Shehbaz Sharif’s recent decisions, CM Elahi said that “it was all drama before and it’s all for show right now”. “After the last 10-15 years whatever we are trying to correct [in Punjab today] is the result of Shehbaz Sharif’s decisions as chief minister,” he continued, “believe me, he knows nothing about how things are done.” “He has been exposed badly,” he added, “he [Shehbaz] used to say he will do this and that but he hasn’t accomplished a single thing”.

Elahi was speaking to the media outside of the newly completed mother and child block at Gangaram Hospital. On the occasion, he praised PTI leader Provincial Health Minister Dr Yasmin Rashid for her hard work and dedication. Reflecting on the developmental projects in Lahore the CM said that “there was a fruit market on one location that I had retrieved and now we are going to build a 400-bed emergency hospital”.

“We are also going to extend the Lahore wing of the Punjab Institute of Cardiology [PIC] to double its size and build an emergency block there as well,” the CM revealed, adding that he is also “going to build a separate system for daily patients”. “In that same vein, Services Institute of Medical Sciences [SIMS] is going to be demolished and within days a new hospital is going to be built there,” he added. He also revealed plans to build a cancer hospital at the Fatima Jinnah Medical University.

Punjab Health Minister Dr Yasmin Rashid on Thursday had hailed an accord between the University of Child Health Sciences and Islamic Aid UK for improving the paediatric emergency department at a cost of Rs100 million. As per a memorandum signed in this regard, work will be done on digitalisation in the Children’s Hospital. The minister had said during a media briefing on the occasion that the Children’s Hospital in Lahore was the largest government hospital in Asia in terms of treatment of children and the educational institution was the world’s first child health university.

Also, Chief Minister Elahi met with the Honorary Consul General General of Pakistan in America Shahid Ahmed Khan at his office in which matters pertaining to mutual interest and investment possibilities came under discussion. It was decided to undertake essential steps for the promotion of business to business relations. It was also agreed between the chief minister and Shahid Khan on the Silicon Valley collaboration with Punjab IT Board. While speaking on this occasion, CM said that necessary steps will be taken jointly with the American multinational companies for the transfer of technology.

He stated that Punjab will take a lead in the IT business export by launching the microchip technology. He stated that with the collaboration of Silicon Valley Boston the IT sector in Punjab will be promoted. CM disclosed that in order to further develop IT universities of Punjab collaboration will be made with the American IT universities. Pakistan and America will have more cordial relations in the coming days. “People to people” will be promoted in America and Pakistan.