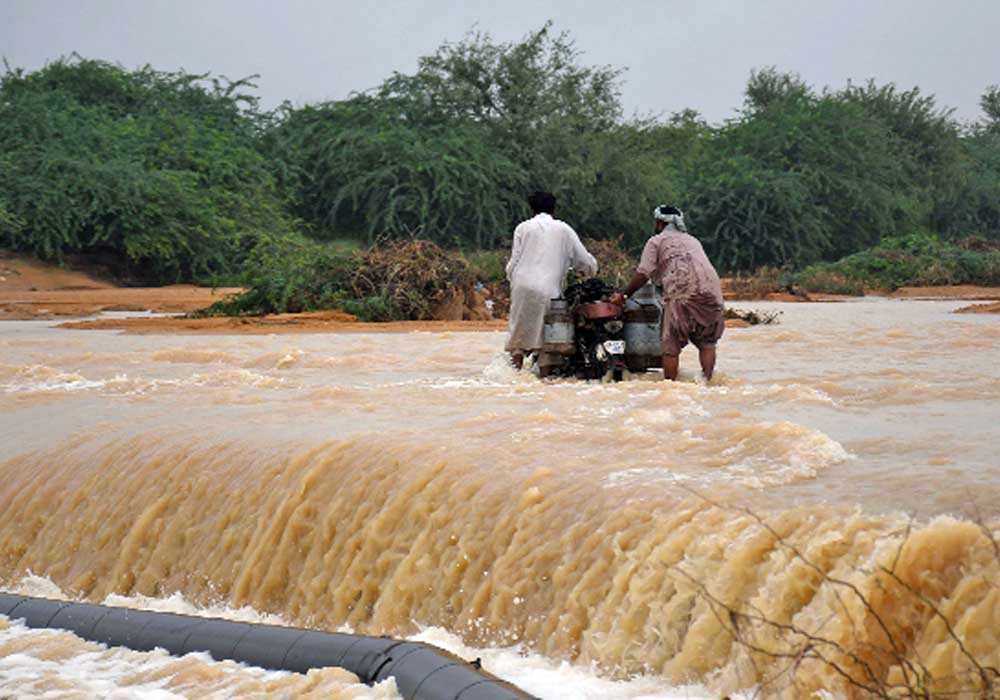 Heavy rains continued to wreak havoc in Balochistan and Sindh after a new spell caused flash flooding in Lasbela district and nearby areas, leaving several villages inundated, while as many as 25 more people lost the lives in Sindh.

Traffic on Quetta-Karachi National Highway remained suspended even after five days as flood water is still flowing over the highway. Lasbela Deputy Commissioner Murad Kasi said flood water had entered villages including Raza Mohammad Goth and Kalmathi Goth in the Uthal area. The ground link between Uthal and the rest of Lasbela had been disconnected after a pylon caved in on a thoroughfare connecting the two points.

Kasi said 12 people were rescued from one of the inundated villages. “An alternative route that was prepared three days ago near Landa River in Uthal has been washed away once again due to floods,” he said. He urged motorists to avoid using Quetta-Karachi National Highway, saying the repair work could take at least two more days. Two cars were washed away in floods on Wednesday night near Zero Point area of Uthal, however, locals with the help of welfare officials rescued five people aboard the two vehicles.

All road and railway network connecting Balochistan to the rest of Pakistan has been disconnected due to recent floods and heavy rainfall in most parts of the country. The situation in other districts has not improved yet as Musakhail, Zhob, Pishin, Qila Saifullah, Qila Abdullah, Nasirabad and Lasbela were still receiving torrential rains for the past two days. According to officials, hundreds of mud houses were damaged in Qila Saifullah, Muslim Bagh, Musakhail, Kohlu, Dera Bugti and other areas due to incessant rains. Rescue teams, including the army, Frontier Constabulary, Levies and local administration were trying to rescue people from far-flung areas of the district which were cut-off due to washing away of connecting roads and of bridges.

Meanwhile, 25 more people lost the lives in different rain-related incidents in Sindh on Thursday after most of its parts were pounded by heavy downpours for several hours on Wednesday night which continued till Thursday afternoon. Reports said that a woman died in Sukkur when the roof of her house caved in; two minor children were killed in Chambar town of Tando Allahyar. Gori Kolhi, 8, was killed in Shahdapur town of Sanghar district. A minor boy was killed in Lakhi Ghulam Shah of Shikarpur district.

Six members of a family and their driver, who were travelling to Hyderabad from Karachi, went missing on Wednesday after their car was swept away by a flood following heavy rain in Sindh. Their vehicle was discovered later in the day on the bank of the Malir River, two to three kilometres away from Karachi’s Link Road, but rescue officials said no bodies were found. A relative of the missing family, Mohammad Danish media persons that his uncle was on his way to Hyderabad after attending a marriage in the port city. Danish added that apart from a driver, his uncle, aunt, and their four children were travelling in the car.

“Due to rains, they used the link road. As the flow of the water increased, the car was swept away,” he said, while also claiming that his uncle had asked the driver to not use the link road. Meanwhile, a flood from the Thaddo Nadi claimed the life of one woman when it entered Mir Khan Barfat Goth. Fortunately, her three children were rescued. At least two people, including a minor child, died while four others got injured in rain related incidents in the Dera Ismail Khan. A five-year old boy fell into a drain and drowned.