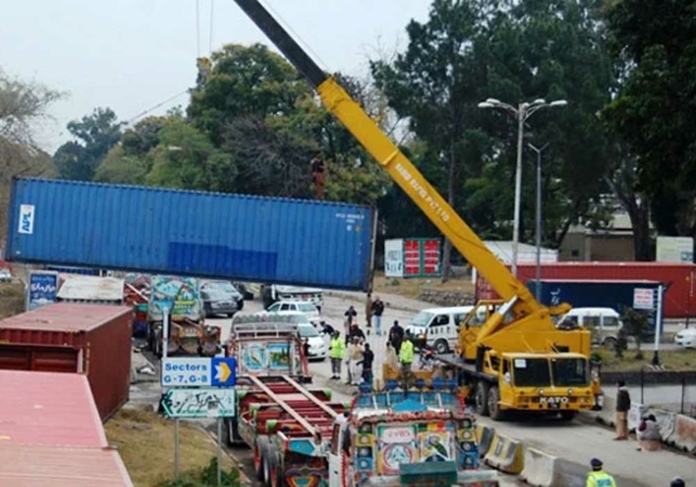 Placing containers and roadblocks has been started by the Rawalpindi administration in the awe of Pakistan Tehreek-e-Insaf (PTI) long march.

PTI’s long march is going to kick off today from Lahore and will reach Islamabad next Friday, November 4 after passing through different cities across the historic Grand Trunk (GT) Road.

Police and Ranger personnel have been deployed in heavy contingents in Rawalpindi city along with Cantonment, a week ahead of the expected arrival of the PTI’s long march.

Murree Road, Liaquat Road, Moti Mahal Chowk, Committee Chowk and other roads have been deployed with heavy contingents. Leaves of police personnel have been cancelled by Rawalpindi police and district administration. While it is expected that emergency will be imposed in all hospitals of the city between October 31 and November 5.

The security agencies and police have been put on red alert, according to media reports while a ward of the Adiala jail has also been vacated to keep PTI workers after the possible arrests. However, arrests would be made in case of violence.

So far PTI activists, officials and lawmakers have gone underground after the Special Branch prepared their lists. PTI leadership had given the task of mobilizing at least 30,000 people in the city on the eve of the long march, according to a report. All MNAs and municipal candidates have been given separate targets to mobilise people from each union council and ward.

In case of confrontation with PTI supporters, the Rawalpindi police have made the decision not to use weapons. However, the police department has received catapults and anti-riot gear. The anti-riot team will stay in front. The police will be armed with weapons, batons, shields, tear gas shells, and other protective gear.