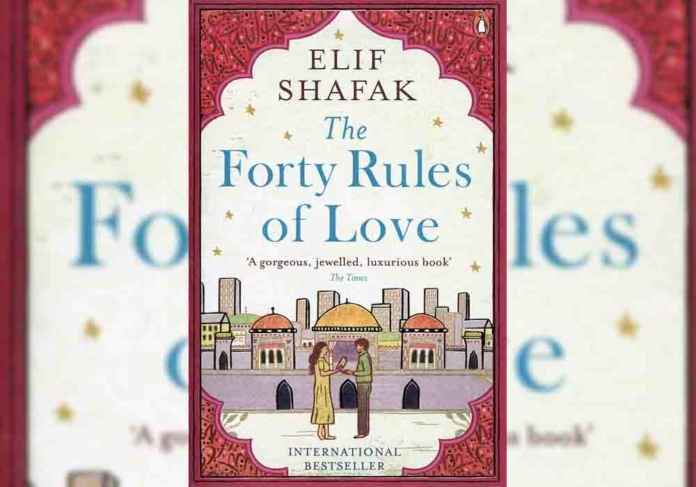 Elif Shafak is an award winning British-Turkish novelist and the most widely read female author in Turkey. She has written seventeen books of which 11 are novels.

â€˜The Forty Rules of Loveâ€™ is her most popular book and was chosen by BBC among the 100 novels that â€˜shaped our worldâ€™.

Metro terms it â€œenlightening, enthralling. An affecting paen to faith and loveâ€ while Telegraph considers it â€œcolourfully woven and beguilingly intelligentâ€.

â€˜The Forty Rules of Loveâ€™ is the story of a woman named Ella who has everything in life, a doting husband, good children, and a comfortable home. Yet something is missing in her life. There is an emptiness, a void. What is the reason for that void? Is it love? Has she married merely out of tradition? Does she not love her husband? Was it a compromise? All these questions invade her mind and as she begins to read a manuscript about the 13th century Sufi poet Rumi and his association with Shams of Tabrez and the latterâ€™s forty rules of love and life, she is shocked out of herself.

The novel opens on the note of a parable. The effect a stone thrown in a river versus in a lake is different. A stone hit in a river will merge with the turbulence, but one thrown in still water will cause ripples.

Just like this, Ellaâ€™s life had consisted of still waters till Aziz came into her life. And I quote:

â€œLove came to Ella as suddenly & brusquely as if a stone had been hurled from out of nowhere into the tranquil pond of her life.â€

The story revolves around Ella and Rumi, both of whom have an encounter with a Sufi mystic. Shams is on a journey to look for his spiritual companion Rumi who he is destined to teach. He wants to make a poet out of Rumi who is his beloved but rather complacent and an un-mystical preacher. Rumi is a willing learner, but his family does not appreciate Shams. Shams wants to lead him into a life of depth and serenity, away from the life of a superficial ego.

Ella, on the other hand as she is working on writing a report on â€˜Sweet Blasphemyâ€™ (as the manuscript is called) by Aziz is so intrigued by it that she falls prey to the promise of love Aziz sparks in her. Leaving behind her safe family life, she begins to traverse deep waters. Whether she finds love at the end or not is a question that can be answered upon reading the book.

Running in parallel with this modern story is also the idea of what Sufism exactly is. Who is a Sufi? A Sufi is someone who questions conventional wisdom and social and religious prejudice wherever he encounters it.

Both Ella and Rumi embark upon a journey of the exotic and unknown, leaving behind the safety of the shore and the comforts of a lavish life for the ecstasy and uncertainty and the heartbreak of love.

Neither Shams nor Aziz promise a long-lasting happiness but what they can offer is the feeling of euphoria, the divine love and deep harmony one feels when the false ego constructed by following the norms of society is broken and the true self emerges.

Shams in his journey unveils the forty rules of love-essential wisdom that he both preaches and embodies.

Shafak, through the eyes of Shams, tells of one of the golden rules and I quote:

â€˜If you want to change the way others treat you, you should first change the way you treat yourself. Unless you learn to love yourself, fully and sincerely, there is no way you can be loved. Once you achieve that stage, however, be thankful for every thorn that others might throw at you. It is a sign that you will soon be showered in roses.â€

Shams is explaining the significance of being humble. Arrogance will only lead to chaos and as long as you love yourself without crossing the thin line between pride and self-respect, you are bound to prosper and be respected by others.

Depraved nafs is the most common state where one desires worldly pursuits. As the person goes through disappointments in life, he rather than blaming the other, blames himself and so the first step towards inner purification starts. This stage is called the accusing nafs. In the third stage the person is more mature, and the self has evolved into the inspired nafs.

Serene nafs is when there is gratitude and contentment for all the hardships that one may come across. Pleased nafs is the stage where the mundane matters make no difference to them.

In the next stage, one wants to serve God through serving humanity. Illuminating and helping others is their foremost priority.

Finally in the last stage one becomes Insaan e Kamil-the perfect human being.

The quote beautifully sums up the meaning of love. It is an emotion that is intuitive. It cannot be explained in words. It is beyond the barriers of language. And yet is the answer to all the problems. Love is the panacea to all illnesses, physical or emotional. Love can change the way one looks at the universe. Love is in the heart. It is in the soul. It cannot be rationalized like the mind. It can only be felt.

The incident that Shams has with the harlot named Desert Rose opens the eyes of the complacent zealots.

As he comes across her and explains to her that â€˜the only filth is the filth insideâ€™ Desert Rose is determined to leave the brothel and commence a new life.

Shams does not accuse Desert Rose of being dirty. Instead, he defends her and in doing so he ignites a spark in the harlotâ€™s eyes-the way forward, the way to a new, clean life.

Another incident with Sheikh Yasin, a religious scholar leaves the reader astounded. The logic and rationale Shams offers to the questions the fanatic asks sends a chill down the spine.

As an argument ensues between both, another very important rule, the difference between a Sufi and an Orthodox is revealed:

â€œThe Sufi says: I should mind my inner encounter with God rather than judging other people. An orthodox scholar, however, is always on the lookout for the mistakes of othersâ€¦he who complaints about others is himself at fault.â€

The experience with the harlot and the orthodox scholar is similar in many ways. Whilst the harlot is dirty on the outside, on the inside she is pure. The scholar on the other hand puts up a faÃ§ade of being righteous but is in-fact shallow and an extremist.

â€˜The Forty Rules of Loveâ€™ is a fantastic novel that intricately weaves a story of divine love & the corporal love in a candid as well as a philosophical manner.

It is a must read and a must have on your bookshelf!