Remittances stay above $2bn despite MoM drop of over 10% 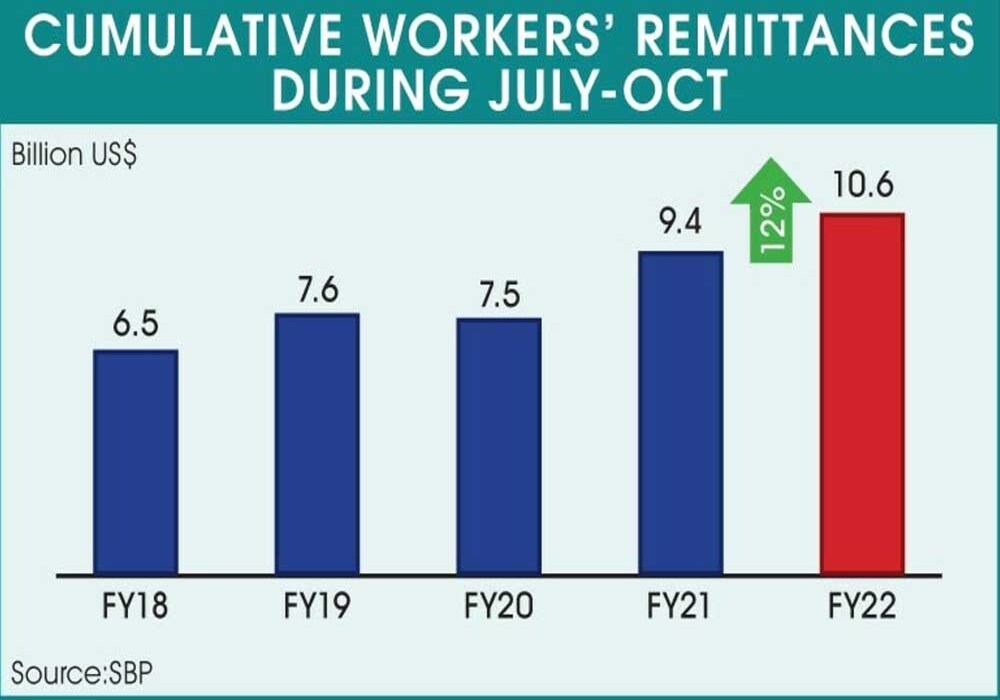 The remittances sent home by overseas Pakistanis declined 10.5% month-on-month to $2.4 billion in September 2022, the latest data from the central bank showed on Tuesday.

The decline in remittances came following the opening of travelling and inflation reducing disposable income. According to the State Bank of Pakistan (SBP), the remittances sent home by overseas Pakistanis fell by 10.5% (month-on-month) and 12.3% (year-on-year) to $2.4 billion in September. Pakistan registered a decline in September because travelling resumed after several months of the ban imposed in order to curb the spread of the global pandemic COVID-19.

It should be noted that this was the 28th successive month in which receipts remained above the $2 billion threshold. The inflow of remittances decreased 6% year-on-year to $7.7 billion in the first quarter (July-September) of the current fiscal year 2022-23. “Pakistan’s remittances are a major source of financing the large trade gap; however, a decline in remittances in September is a cause of concern,” former advisor to Finance Ministry Dr Khaqan Najeeb said.

The former adviser suggested that trend authorities must consider and strengthen Pakistan’s remittance initiative, ensure smooth and quick flows of funds and most importantly keep an eye on the disorderly movement of the rupee and the difference between interbank and open market rates. “A large difference in the two rates as seen in September can influence behaviour to use informal channels something the country can’t afford,” he said, adding that a large gap of around Rs10 in the interbank and open market has possibly negatively impacted the flow from the official channel.

Endorsing his views, Pakistan-Kuwait Investment Company Head of Research Samiullah Tariq said: “Remittances had decreased from formal channels due to the large spread between the interbank and open market rate, which reached Rs10-12.  “As the gap now has reduced the remittances from formal channels have now increased.” It should be noted that the rupee’s upward streak, however, might impact dwindling remittances as expats look for better conversion rates as previously depreciating currency meant that they had to deposit more money to send home to make it equivalent in rupee terms. The government and central bank’s recent permission for currency exchanges to disburse remittances may also boost the numbers, as it may bring more ‘grey’ remittances into the net.