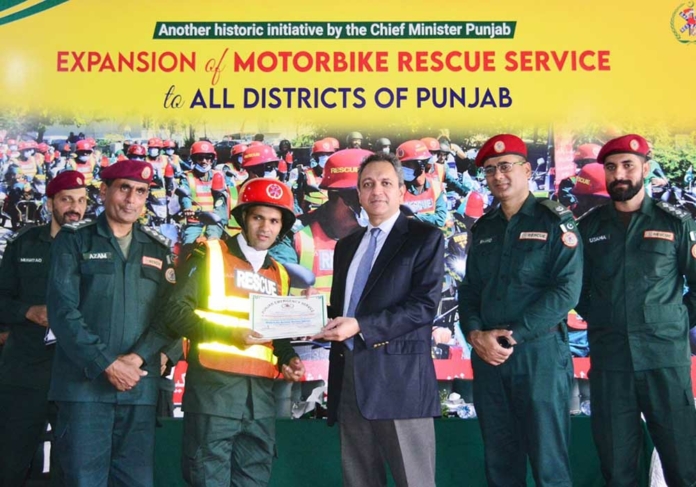 The Punjab Emergency Service Department on Monday celebrated the fifth anniversary of the motorbike rescue service at its Command and Control Centre in Lahore.

He said that motorbike rescue services had responded to over 1.1 million emergencies in Punjab with an average response time of four minutes. The DG also cut a cake to mark the anniversary.

Addressing the ceremony, Dr Rizwan said that the motorbike rescue service was started in 2017 in the provincial capital to deal with emergencies in congested areas.

He said that Rescue 1122 accepted the challenge and made it successful with hard work, commitment and dedication. “Initially, the project was started in divisional headquarters and now Punjab Chief Minister Chaudhry Parvez Elahi has approved its expansion to all districts of Punjab for the provision of emergency services at the doorsteps of the citizens.”

Dr Rizwan thanked the CM for strengthening Rescue 1122 for providing new ambulances and motorbikes. He also thanked the CM Punjab for approving the risk allowance for rescuers.

“The service is responding to around 1,000 emergencies on a daily basis in Punjab. As a result of training and equipment provided to the staff, they are able to manage 35 per cent of the emergencies at the site of incidents, thus reducing the burden on hospitals.”

He said that the motorbike rescue service has turned out to be a very cost-effective emergency response model and significantly reduced the burden on the ambulance service in all districts of Punjab.

In the end, the DG distributed certificates among the staffers and asked them to continue working diligently.