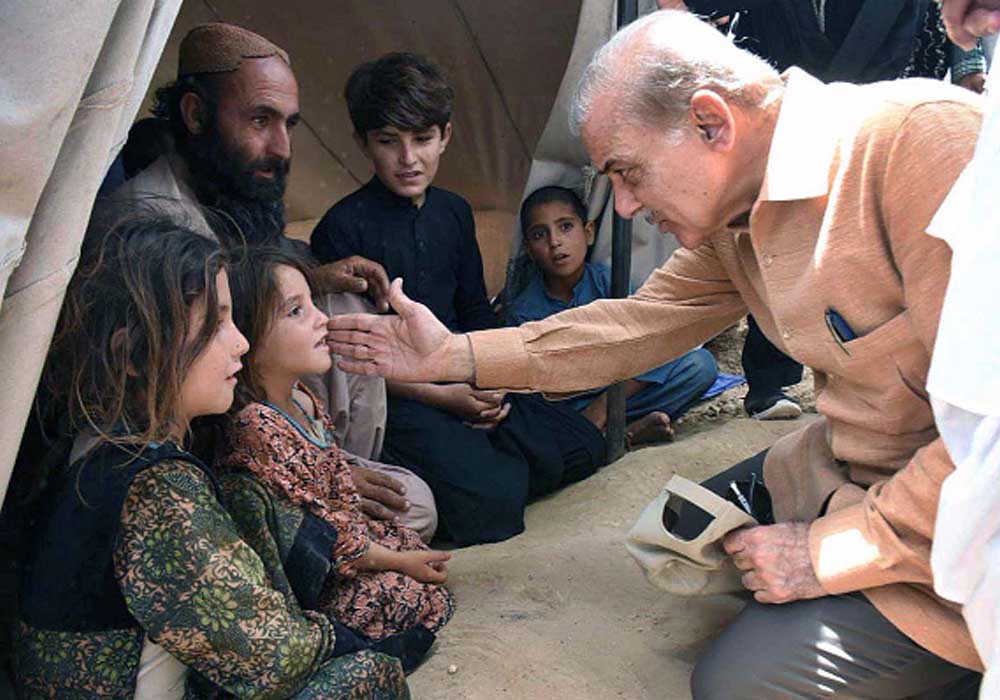 Prime Minister Shehbaz Sharif on Friday announced a grant of Rs 15 billion to the Sindh government to provide rescue, relief and reconstruction/rehabilitation and to deal with the heavy loss of lives and infrastructure destruction caused by flash floods.

During his visit to flood-hit areas, the prime minister took an aerial view of the inundated areas of Sukkur, Rohri, Khairpur, Faiz Ganj, Kot Diji, and Thari Mirwah. He was briefed on the massive and unprecedented damages and devastation caused by the unprecedented rains and floods as well as relief and rehabilitation work. Later, he met with flood-affected people. Speaking to the media along with Foreign Minister Bilawal Bhutto and Sindh Chief Minister Syed Murad Ali Shah at Sukkur Barrage, the premier said the situation demanded rising above politics and helping the flood victims overcome their miseries.

The prime minister said the grant by the federal government would help the Sindh government carry out rescue, relief and rehabilitation activities. He said the coalition government would make collective efforts to alleviate the sufferings of the flood victims, adding that it would leave no stone unturned to facilitate the people who have faced unprecedented loss in the wake of floods.

PM Sharif also mentioned that nearly one thousand people died due to floods in the last few months with a heavy toll on crops and livestock. He directed the relief and rescue staff as well as officials National Disaster Management Authority (NDMA) to be available round the clock to help the flood victims. The premier also announced the disbursement of Rs24,000 per household through Benazir Income Support Programme (BISP), which he said had already started on Friday.

He assured that during one week, around Rs 28 billion would be given to the affected people. “This matter does not end here, as the rains continue, this amount will
increase. The federal government is prepared for it despite the economic situation. We are doing all this for you,” he said.

Shehbaz also said that Energy Minister Khurram Dastagir would stay in the province until all the grid stations are operational again. “He will assist the Sindh government and give me regular updates.” Prime Minister Shehbaz promised that the coalition government would make collective efforts to alleviate the sufferings of the flood victims. The medical camps are on the alert to treat patients in the flood-hit
areas, he added.