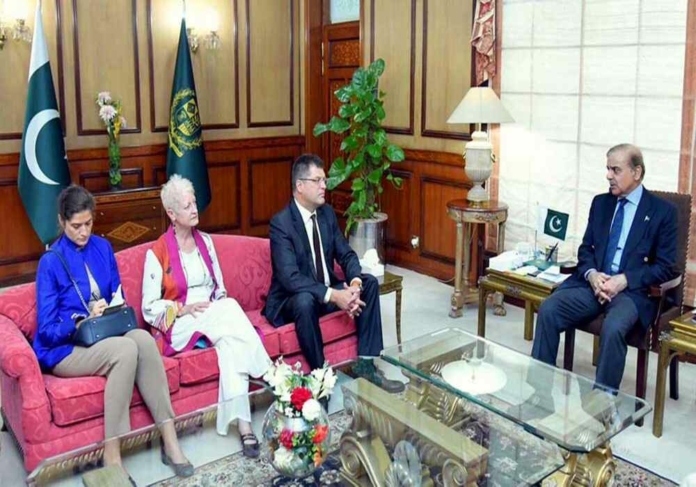 The prime minister expressed these views during a meeting with the Right Honourable (Rt Hon) Angela Reynar, deputy leader of the British Labour Party, who was accompanied by Lord Wajid Khan, member of House of Lords, who called on him.

The prime minister highlighted that Pakistan, despite contributing less than one percent of the global carbon emissions, remained one of the countries most affected by the climate change. He also thanked the United Kingdom for its £16.5 million of humanitarian assistance, provided to Pakistan.

The prime minister made special reference to the positive role played by the 1.6 million Pakistani diaspora in forging closer bonds between the peoples of both countries.

Raynar expressed her sincere condolences on the loss of human lives due to the recent floods in Pakistan. Lord Wajid informed the prime minister that British Pakistanis were greatly engaged in the relief and rehabilitation efforts for fellow Pakistanis, who had been adversely affected by the recent floods. The visiting delegation assured the prime minister of their continued cooperation to garner support for flood victims.

Meanwhile, Shehbaz said that Pakistan greatly valued its relationship with the European Union based on shared values and common objectives of peace, prosperity and development.

Talking to European Commissioner for the Crisis Management Janez Lenarcic, the premier appreciated the EU’s assistance in the wake of climate-induced massive floods in Pakistan.

Expressing satisfaction at the high-level engagement between the two sides, the prime minister expressed hope that both sides would continue to work together to further enhance their bilateral trade and investment ties, so as to benefit from the GSP Plus Scheme, post 2023.

He also shared the details of the devastation caused by the floods to crops, housing, livestock and critical infrastructure, as well as death of more than sixteen hundred people.

The prime minister underlined that Pakistan, while being a most negligible contributor to global carbon emissions, was amongst the most vulnerable countries to the impact of climate change.

He expressed the hope that the international community would step up its efforts to mitigate the negative effects of floods through active participation in rehabilitation and reconstruction phase.

Shehbaz also highlighted the efforts undertaken by the government that included humanitarian response for the people in the affected areas and establishment of the Prime Minister’s Flood Relief Fund 2022 for providing relief and rehabilitation to the victims of torrential rains. The fund accepts donations/contributions both from domestic and international sources.

On the other hand, the European Union announced to substantially scale up its financial assistance to Rs6.7 billion (30 million euros) to the flood-affected people in Pakistan.

Janez Lenarcic announced the humanitarian aid for Pakistan during a meeting with Shehbaz Sharif, said a statement issued by the European Mission. The new funding aims to address the most urgent needs, such as basic shelters, clean drinking water and sanitation, food and nutrition, and medical services.

The actions funded by the European Union would ensure that women, children, and other vulnerable people are protected from further harm and that children have access to education again as quickly as possible.

Meanwhile, Shehbaz Sharif on Tuesday thanked Turkish President Recep Tayyip Erdogan and the people for sending trains loaded with supplies to the flood-stricken people of Pakistan.

The prime minister said that be it the earthquake of 2005, super floods of 2010 and recent floods, Turkiye had always come forward to help the people of Pakistan. He said 50 boats sent by Turkiye for rescue and relief operations had helped relocate hundreds of people stranded in inundated areas of Sindh and Balochistan.

Ismail Hakki Turunc offered condolences over the loss of precious lives during the recent floods in the country. He expressed his full support in rescue and relief operations for the flood affected people across the country and assured continuous support in their rehabilitation process.