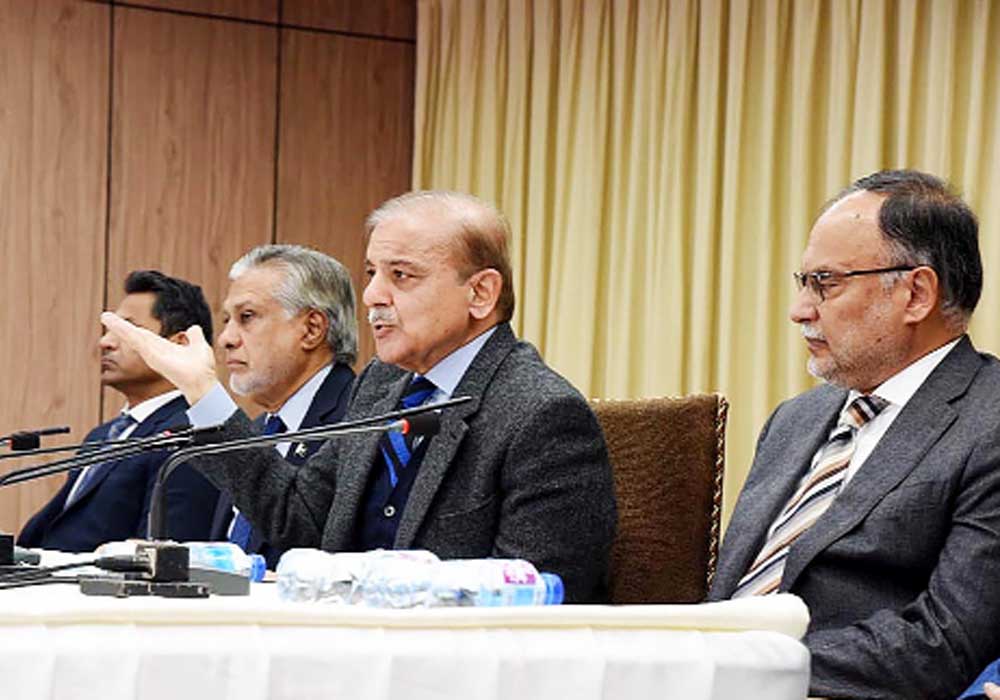 Prime Minister Shehbaz Sharif on Monday said he was ready to move forward with the opposition on talks for the country’s sake.

Addressing a press conference in Islamabad with a coterie of federal ministers, the prime minister said Finance Minister Ishaq Dar had met President Arif Alvi with his permission.

“We will move 100 steps forward for the country’s stability. But it takes two to tango. We have to sacrifice when nation faces such a situation [as we are in],” he said.

However, Shehbaz questioned what talks could be held with “an egoistic and liar person who even defames the army”.

“I want to tell the people that this person is a fraud having nothing to do with the nation’s future,” he said. But at the same time, the premier called for setting aside differences for the country’s progress.

He said the previous government “ridiculed” his idea of a ‘Charter of Economy’ and misconstrued it as a desire to seek a national reconciliation ordinance (NRO)-type agreement.

The premier told the media that the incumbent government inherited a shaken economy and that it had to “beseech” the International Monetary Fund (IMF), which was not ready to trust Pakistan after the previous regime had deviated from its commitments.

He said that by passing the burden of the oil price surge to the masses, the incumbent government sacrificed its politics in the state’s interest as the previous regime had “laid a trap” for the current setup by not raising the prices.

Shehbaz said the government had disbursed Rs70 billion among the flood-hit families through the Benazir Income Support Programme and spent billions more through the National Disaster Management Authority (NDMA) to supply food packages, tents, and mosquito nets. Besides, Rs400 million were also given in form of compensation for life losses, he added.

“With the onset of the winter season, a huge challenge is still ahead. Don’t know where the money will come from [to support the reconstruction],” he added.

He said instead of spreading rhetoric about Pakistan becoming another Sri Lanka, Imran should “give an account for the sugar mill and wheat scandals”.

To another question, the prime minister said the PTI chief also showed a lack of gratitude to his “benefactor” ex-army chief General (r) Qamar Javed Bajwa. He said the new army chief was a “professional soldier with a shining career” and hoped that he would strengthen the institution and serve the country.

Regarding the unconditional apology from British publication Daily Mail, the premier said it was a “vindication” of the 220 million Pakistanis which also thwarted an “anti-state conspiracy hatched by Imran Khan and his cronies”. “It was an apology … to millions of those mothers and children who were benefiting from the DIFD (Department for International Development) projects to support their food and health,” he said.

Apprising the media of the allegations levelled by the previous government through the Daily Mail article, he said the onslaught was only meant to defame him, the PML-N and party supremo Nawaz Sharif.

“He (Imran) was so callous to never think that it will not only malign Nawaz or Shehbaz, rather it will hurt Pakistan’s reputation,” he remarked. The newspaper also published its apology in Sunday’s print edition, PM Shehbaz added. The premier told the media that DFID’s project amount of 600 million pounds was spent transparently and the allegations were also contradicted by the department itself.

“Consequently, the country was mocked and a message was conveyed that Pakistan should not be given any aid or grant,” he added.

Shehbaz said despite the passage of three years, former accountability czar Shahzad Akbar had failed to produce documents to substantiate his allegations, which also led to the prime minister’s vindication by the UK’s National Crime Agency.

Meanwhile, Shehbaz said that by selling a specially designed watch inscribed with the Holy Kaba’s model, gifted by the Saudi crown prince, Imran had committed the “cheapest act”. He said investigations should be held as to how the former prime minister had “destroyed the national economy and foreign relations and strained ties with brotherly countries”.

He also mentioned an article published by the Financial Times accusing the PTI chief of spending donations collected for the Shaukat Khanum hospital on his politics.