CM announces increase in salaries of officials of anti-corruption department 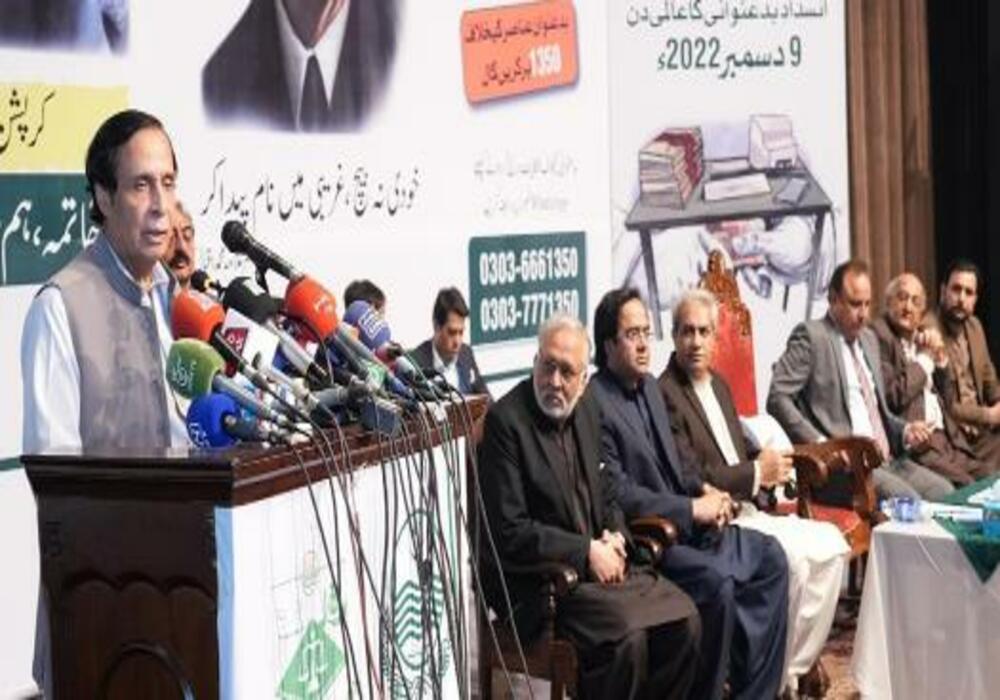 Chief Minister Punjab Chaudhry Parvez Elahi said that the Sharif family, including Shehbaz Sharif, did not do any significant or commendable work for the welfare of the masses.

“We were afraid as if he would ask for a return ticket as well,” the Chief Minister said while addressing a ceremony in connection with International Anti-corruption Day at Alhamra. The CM said that the Sharif family is ruling for the last 30 years and did not bother to even slightly think about the masses. This family only thinks about its own well-being and fills up its coffers. They claim that they did not indulge in corruption of even a single penny “yet their own people disclose them doing massive corruption”. The CM remarked that he remained with the Sharif family for 15 years and knows all of them through and through.

Now few people are planning to play a trick but our Quaid Imran Khan has inculcated so much awareness among the people that no corrupt politician will survive in the political arena. The Sharif family wherever goes abroad than people over there raise slogans of thieves whether they go to some restaurant for dining or to some store for doing shopping slogans of thieves are raised on them. Neither these people cannot eat food nor can do shopping with ease. CM stated that the PTI followers have found the best solution to deal with them and he pays tribute to them. He stated that every government held them accountable adding that he had contested an election for the first time in 1977 and ever since every government fulfilled its desire by holding us accountable.

The voice of self-accountability comes from one’s inner self and when it comes from the inner self then the fear of Allah Almighty will develop and resultantly corruption will itself be stopped. When the hand of Allah Almighty comes on someone then the hand doing corruption itself stops and then every work is blessed and rewarded. The war against corruption should be the cardinal part of our faith and if one has a strong faith then he cannot think about doing corruption and then the need for establishing anti-corruption institutions does not arise.

CM maintained that the laws relating to anti-corruption have become obsolete and there is a need to review them. He assured that the Punjab government will provide full assistance in order to improve these laws. Wherever a need arises legislation will be done and shortcomings will be overcome. If needed then consultation with the judiciary will also be made. He said we are moving forward by taking reforms agenda in the light of directions of our Quaid Imran Khan. He stated that every day he makes an effort to do some significant work for the betterment of common people and their children.

He emphasized that we would have to apply self-accountability in our lives. Imran Khan is our leader as he has raised a vociferous voice against corruption adding that Pakistan will move forward by eliminating corruption and doing self-accountability. Losing hope is a sin and we should keep on going hard work and strive for betterment. Allah Almighty will shower his blessings and respect as well as dignity of Pakistan will be enhanced.CM paid tributes to the performance of Provincial Adviser Brigadier (Retd) Mussadiq Abbassi and his whole team. Anti-Corruption Department retrieved rupees 238 billion directly and indirectly and deposited them in the national exchequer which manifests their dedication and excellent strategy.CM lauded the Anti-corruption department for setting a worthy example of dutifulness and diligence.

Chief Minister Elahi regretted that Shehbaz Sharif has “crossed the limits of enmity with Punjab” and added that he has resorted to oppression with the farmers of Punjab for the sake of his allies. In an important statement issued on Friday, Parvez Elahi stated that if the Greater Thal Canal agreement with the Asian Development Bank is not signed by December 13, the agreement will automatically expire. The cut-off date to sign the Executive Committee of the National Economic Council (ECNEC) approved project is Dec 31, 2022; he highlighted and regretted that there is no progress on the part of the federal government.