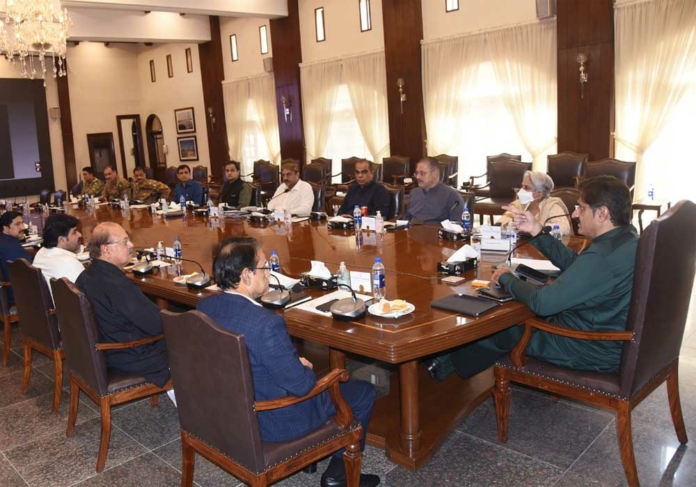 The Sindh cabinet meeting held under the chairmanship of Sindh Chief Minister Syed Murad Ali Shah on Wednesday approved the huge amount of Rs50 billion for the construction of damaged houses for flood-affected people in the province.

“Each and every owner of the damaged house would be given Rs50,000 to start construction, and when the construction would reach the plinth level the remaining amount of Rs250,000 each would be transferred to their bank accounts to complete the rest of the work,” the CM decided after consultation with the cabinet members.

This was disclosed by Minister Information Sharjeel Inam Memon while addressing a press conference at Sindh Archives Building.

The meeting was held at CM’s House and was attended by provincial ministers, advisors, special assistants, Chief Secretary Dr Mohammad Sohail Rajput, P&D Chairman Hassan Naqvi, PSCM Fayaz Hussain Jatoi and others. It may be noted that 1.7 million houses have been damaged by the flood and the construction of all the damaged houses would cost Rs160 billion. Of them, the World Bank has pledged RS110 billion, and the remaining amount is being arranged by the provincial government, federal government and through sources and donors.

Moreover, CM Advisor on Agriculture Manzoor Wassan told the cabinet that crops spreading over 3.6 million acres have been damaged during the recent floods and farmers have suffered losses worth Rs421 billion.

Wassan said that it was agreed to begin with the provision of free wheat seed for which Rs13.5 billion were required. He added that the Sindh government provided Rs8.39 billion while the federal government was contributing Rs4.7 billion.

Minister Energy Imtiaz Shaikh while presenting the village electrification agenda said that the Sindh government was continuously taking necessary measures for the electrification of villages under the Annual Development Program.

Shaikh told the cabinet that SEPCO was given Rs3,499.63 million for the electrification of over 1.5 million villages. The SEPCO has provided electricity to 2,909 villages. Work order has been issued for 3,893 villages, 3,227 villages’ electrification has been approved, 151 villages are under the approval stage and work on 318 villages is in progress.

Similarly, K-Electric has been provided Rs103.180 million against which 12 villages have been electrified. The cabinet directed the Energy Department to expedite the electrification of villages through alternative energy solutions like Solar PV technology for solarization through mini/microgrids, provision of solar home systems, solar-based streetlights, solar tube-wells.

The cabinet-approved solarization would be carried out through the Energy Department and the provision of new/additional transformers with allied accessories is also included in the village electrification porgramme.

Moreover, the home department presented amendments to Sindh Prohibition of Preparation, Manufacturing, Storage, Sale, and Use of Gutka and Manpuri Act -2019 in the cabinet and said the amendments to the bill were pending before the standing committee of the provincial assembly.

The cabinet approved the amendments as per the order passed by Sindh High Court in a Constitutional Petition No. S-349/ 2021, regarding the incorporation of certain additional amendments to the existing act in order to create deterrence against unlawful preparation, manufacturing, storage, sale, and use of gutka, manpuri, and betel nuts.