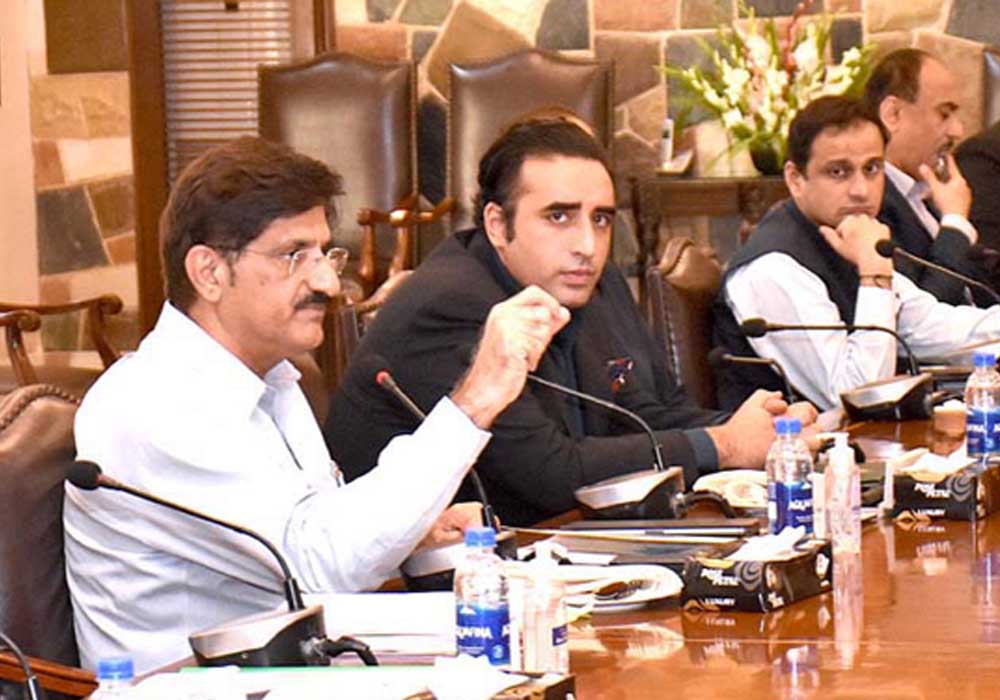 A high-level meeting of the Sindh and federal governments was held at the CM’s House in which a unanimous decision was made to constitute a task force to coordinate, collaborate and work together for the procurement of relief goods and their distribution through an appropriate mechanism as well as to restore the main arteries damaged by recent floods.

At the outset of the meeting, Bilawal said that Prime Minister Shehbaz Sharif had visited flood-hit areas of Sindh thrice and that the requirements of 1 million tents, 3 million mosquito nets and ration bags would be provided to the people at the earliest.

Another issue he raised was the repair of main arteries such as the National Highway and Indus Highway so that smooth flow of vehicular traffic could be ensured. He also asked the NDMA to include fodder in the relief goods so that the cattle of the affected people could be fed.

Talking about tarpaulin tents, the chief minister said that 165,187 were available with his government, including 8,497 provided by the NDMA, 2,500 by the UNHCR and 100 by the Food Department, which had been distributed.

Ahsan Iqbal said that the PDMA was in the process of procurement of relief goods, and they would be provided to the provincial government. The NDMA chairman also shared data of the relief goods they were procuring.

The Corps-V brigadier told the meeting that they had deployed 3,641 army personnel to help rain-affected people. “The Corps-V used helicopters to rescue people from the flooded areas of Qambar-Shahdadkot district. The Pakistan Army has set up 64 relief camps and nine medical camps, besides deploying 147 boats, and is distributing relief goods among the affected people.”

Brigadier Nayar of the Engineering Corps told the meeting that rainfall was expected after September 15 and may affect the Left Bank Outfall Drain (LBOD). He added that currently, the Guddu and Sukkur barrages were in low flood (at 210,860 cusecs and 302,476 cusecs, respectively), while Kotri Barrage was facing high flood of 604,127 cusecs upstream and 583,882 cusecs downstream.

According to the report, the West Indus – the area from Qambar-Shahdadkot to KN Shah, is underwater. A flood deluge is flowing from north to south. The banks of the Right Bank Outfall Drain (RBOD) and Indus Link are protecting Dadu and Sehwan. The breaches in Manchar Lake and RBOD would form another lake within the next three to four days, the meeting was informed.

Within the next six days, all barrages in the province would run into low floods and then in normal flow.

At this, the chief minister said that efforts were being made to protect Indus Link/RBOD to save Dadu and Sehwan.

The political leadership in the meeting decided to strengthen the RBOD and Indus Link bunds to save Dadu and Sehwan. The road and load management on Dadu-Moro Bridge would be carried out, he said.

It was also decided to strengthen canal bunds and LBOD surrounding Pangrio town. The chief minister, in consultation with irrigation experts and the Engineering Corps, decided to regulate the water of Dhoro Pran and discharge its water into Spinal Drain – LBOD.

The Engineering Corps told the meeting that dewatering in Khair would be started with the coordination of the civil administration.

The meeting directed the district administration, Irrigation, Agriculture, Local Government and Public Health Engineering departments to make necessary arrangements to dispose of rainwater from towns, cities and agricultural lands so that people could start returning to homes.

The chief minister said the task force would be notified by today (Thursday).

On the other hand, Sindh Minister for Information, Transport, and Mass Transit Sharjeel Inam Memon said that 601 people had died in rains and floods in Sindh, while over 0.5 million houses were completely destroyed.

Addressing a press conference at Shahbaz Hall, Sharjeel Memon said that there was an emergency situation across the country due to rains and floods and millions of people had become homeless.