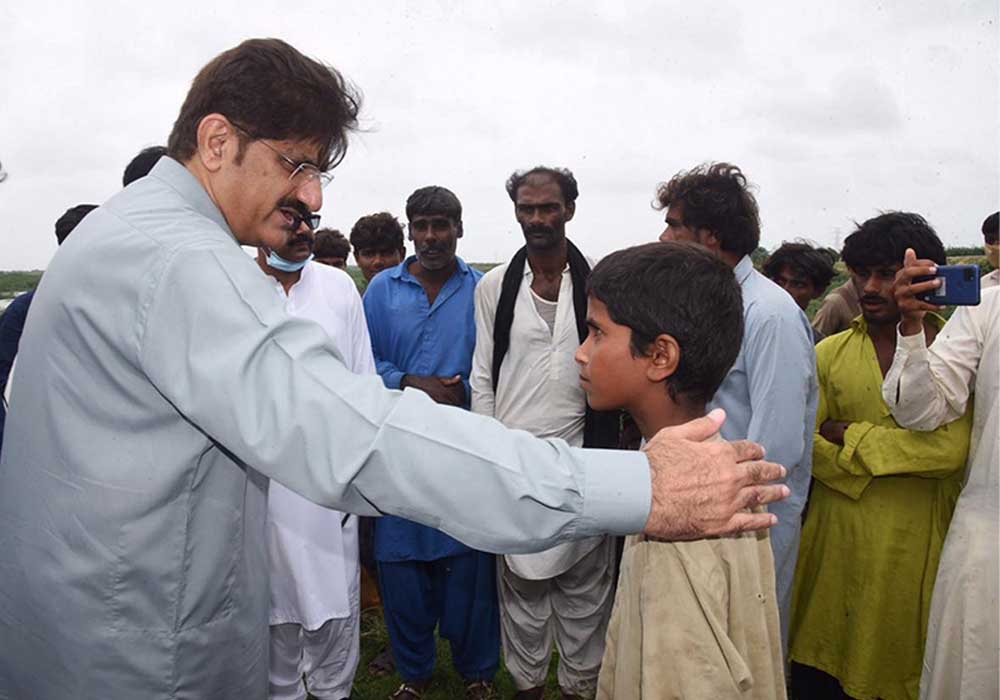 Declaring the whole province calamity-hit, Sindh Chief Minister Syed Murad Ali Shah on Saturday said that the people of Sindh would not be left alone in this testing time and the Pakistan People’s Party (PPP) government would take all possible measures for their rehabilitation.

Talking to media persons during his visit to Thatta, he said that the country had been facing worst environmental crisis following which it received 500 times heavier rains this year, adding that they were in coordination with all state institutions to seek their assistance for the people of Sindh. “I have issued clear directions to the district commissioners of rain-affected districts for initiating relief activities in their districts,” claimed the CM, adding that he had issued directions to director general (health) for providing health facilities to the masses of affected areas.

Talking about issuance of funds, he said that funds were being issued to district administrations to recede water from the villages and residential areas. He agreed on the fact that the recent rainfall had badly damaged infrastructure, including roads and bridges, across the province and the Sindh government would launch development schemes soon for restoration of the infrastructure.

“PPP was the first party that introduced Watan Card scheme during flashflood of 2010 and heavy rains of 2011,” mentioned the CM, and added that 60 percent families of every rain-affected union council would get relief schemes from federal government.

After meeting with rain-affected families of Thatta and Sujawal district, he said that the affected families would get Rs25,000 under Benazir Income Support Programme. After Thatta, the CM visited affected areas of district Sujawal where he directed Health Department officials to ensure availability of anti-snake bite vaccine and other necessary medicine at all health facilities of the district.

During his visit, the chief minister was briefed on the condition of protective dykes and arrangement made for their maintenance.

Separately, Murad during his daylong visit of the flood-affected areas of Hyderabad division declared two more districts as calamity-hit areas and vowed to give Rs25,000 to each family through BISP.

The chief minister started his visit from Malir River at Quaidabad where he directed Irrigation Department to keep district and divisional administration of Karachi informed when any torrential deluge hits the river so that necessary measures could be taken to avoid any untoward incident.

In all the four talukas, 9,980 houses have been damaged, 20,365 acres of different crops, including betel leaf, cotton, paddy, sugarcane and vegetables, submerged.

Sujawal Deputy Commissioner Shaharyar Memon, while briefing the chief minister, said that unprecedented rainfall has damaged 12,801 houses, including 10,512 partially and 2,289 fully. He said 87,045 people, including 46,134 women, were displaced, four cattle perished and 88 percent of total crops on 86,670 acres washed away.

Badin Deputy Commissioner Agha Shahnawaz briefing the CM at his office said that Badin was a low-lying district located at the tail end of the province with a vast coastal area.

Murad Ali Shah was told that Badin had always remained prone to severe climatic challenges like cyclones and flashfloods due to breaches in LBOD and heavy rainfall.

The chief minister talked to media at DC offices in different districts and assured the people of rescue in the first phase and rehabilitation in the second.

He said that over Rs40 billion losses and damages have been estimated. “We will repair and reconstruct all the damaged roads, bridges, drains and channels,” he said.