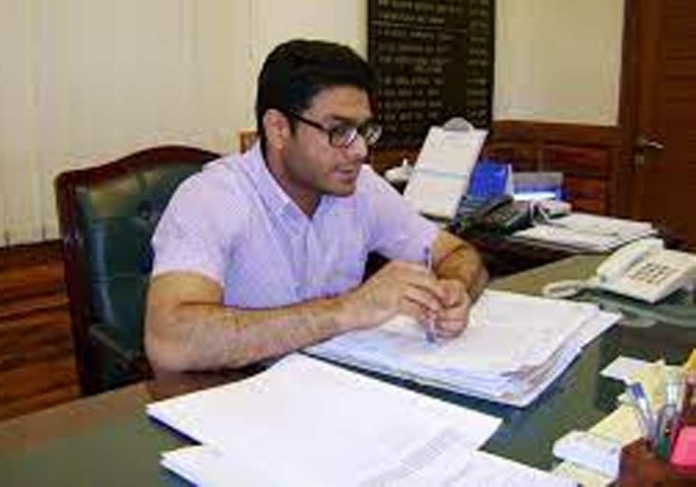 The Sindh government in a letter written to the federal government has sought suspension of deputy commissioner (DC) Naushehro Feroz after the M-6 scam surfaced a few days back.

The massive corruption scam of misappropriation in the funds released for procurement of the lands for the scheme of M-6 reached Naushehro Feroz district after Matiari disclosure that deputy commissioner of the district, Mohammad Tashfeen Alam, has been involved in the scandal according to sources.

DC Naushehro Feroze Tashfeen has been in hiding for the last four days, official sources said. The amount released by the government to deputy commissioners for procurement of land for the motorway has been misappropriated, sources said.

The Sindh government apart from writing a letter to the federal government seeking suspension of the services of the DC Naushehro Feroze has also constituted a team for the arrest of Tashfeen Alam. The team members visited the office of DC and recovered the documents. The team has been directed to submit its detailed report within seven days.

DC Matiari Rashid was arrested over graft charges and anti-corruption officials took key papers in their custody during the search of his office. Adnan Rashid was removed hours ago from his office over corruption charges in funds for Sukkur-Hyderabad Motorway (M-6) project.

He had allegedly misappropriated Rs1.75 billion from the motorway funds. The Assistant Commissioner New Saeedabad Mansoor Ali Abbasi was also suspended from his office. Chief Secretary Sindh Dr. Mohammd Sohail Rajput had initiated an inquiry into the corruption scam related to land procurement for the motorway project.

Instead of payment to landowners by cross cheques, the amount was drawn in cash by the accused in their own names, according to the inquiry report. According to documents the National Highway Authority (NHA) had released an amount of Rs4.09 billion to DC Matiari for the purchase of the land for the motorway. The accused drew Rs1.82 billion cash from Sindh Bank for the procurement of land for 70 kilometres of the road, according to documents.

An amount of Rs4 billion was transferred to another account by the accused which earned Rs540 million profit. AC New Saeedabad paid cash to the landowners instead of cheques, according to case papers.

According to credible sources, the officials of the Anti-Corruption Establishment on Wednesday completed their investigation into the scam. It was revealed that out of 410 land owners only 90 real landholders were given the amount for their lands while the remaining amount was misappropriated by revenue officials in connivance with of local influential landlords.

The same sources said that the arrested DC Matiari and other officials who were arrested and interrogated made startling disclosures of the alleged involvement of an influential political family in Hala town. They added that the name of the Sindh Minister for Revenue Department might be included in the final report by ACE officials.