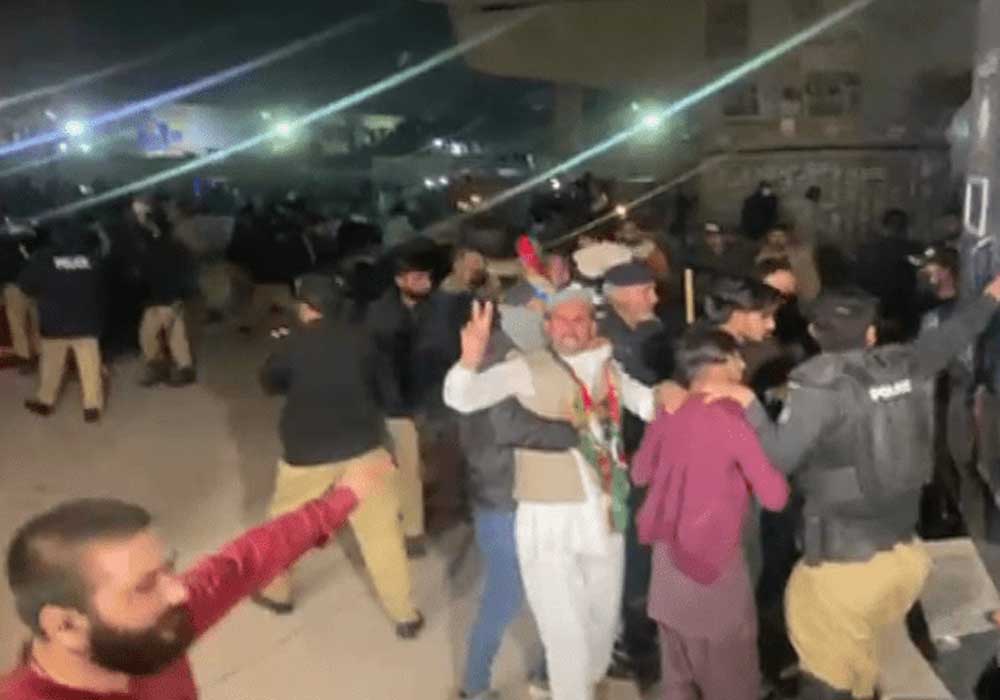 Pakistan Tehreek-e-Insaf (PTI) and Pakistan People’s Party (PPP) workers clashed outside the Keamari deputy commissioner’s (DC) office in Karachi on Wednesday, pelting either side with stones during the consolidation of the results of the recently held local government elections in Sindh.

The second phase of the local government elections was held in 16 districts of Sindh on Sunday. However, major contesting parties – including the ruling PPP – had raised concerns over an unusual delay in the results in Karachi and blamed the Election Commission of Pakistan (ECP) for mismanagement.

The ECP took more than 36 hours to announce the results of 236 union committees of Karachi as the opposition PTI and Jamaat-i-Islami (JI) accused the provincial administration of “rigging and managing things” in its favour.

On Wednesday, the PTI accused the PPP of attacking its workers while the Keamari DC maintained that PTI workers forcibly entered the office and harassed staff. Keamari DC Mukhtiar Abro, who is also the district returning officer, said that the PTI workers had “encircled” his office. He alleged that PTI’s Ali Haider Zaidi and others forcibly entered the premises and broke the locks. “The PTI workers ransacked the computer and harassed staff including female returning officers who were busy performing their electoral duty,” he said. He further said that PTI workers threw stones and broke the windows of several vehicles. He said police took action against the hooliganism and removed the party workers from the DC office.

Abro said a first information report would be lodged against PTI leaders and workers over the incident.

A handout issued by the Keamari police said SSP Fida Hussain Janwari reached the spot and brought the situation under control.

The statement said district police arrived at the scene with water cannons and other equipment to deal with any emergency situation.

It added that the situation was currently under control and all political workers had been dispersed.

Zaidi, on the other hand, alleged that he had gone to meet his candidates and talk to the press when PPP “goons prepared with stones and under full protection of Sindh police attacked”.

Talking to the media, Zaidi said PTI workers were camped outside the DC office since Monday, awaiting the official results. He said that he had visited the office to talk to party workers.

“They already had PPP goons stationed there with sticks and stones, and as soon as I was set to begin talking to the media, they started throwing them,” he said. Zaidi alleged that the hooliganism occurred with “police protection”.

Meanwhile, PPP Senator Waqar Mehdi said that electoral staff were busy compiling and consolidating the results of the LG polls when the PTI workers, led by Zaidi, Bilal Ghaffar and others, “resorted to hooliganism and attacked PPP workers who were also present there”.

“The PTI workers also ransacked the offices,” he added.

Mehdi said the police had brought the situation under control. The senator accused the PTI of “creating chaos” in the metropolis as they could “not tolerate their defeat” in the LG polls.

“After [a] historical defeat, PTI is going crazy and as usual their tolerance level is going low,” he said.

Earlier in the day, PTI Chairman Imran Khan alleged that “massive foul play” was afoot during the second phase of the Sindh local government elections, adding that such “manipulated” polls would only aggravate polarisation and anarchy in society. In a series of tweets on Wednesday, Imran said that recent reports regarding the polls had made it apparent that the PPP had “no commitment to fair and free elections”.

“Instead, it uses force, blackmail, police harassment, money to get votes. Now [it is] also clear why the ECP, its cabal of crooks and their handlers sabotaged electronic voting machines (EVMs),” he added. The ex-premier said that EVMs ensured transparency and provided results immediately, thereby preventing “rigging and engineering”.

“Right now, results of LG elections which should have come out within a few hours at most were coming out in a staggering delay, some for days, allowing for massive foul play. “If this is the sort of elections ECP, the state and the Pakistan Democratic Movement want, then the stability that elections are meant to bring will not happen. Instead, such manipulated elections will only cause more agitation, polarisation and anarchy,” he said.