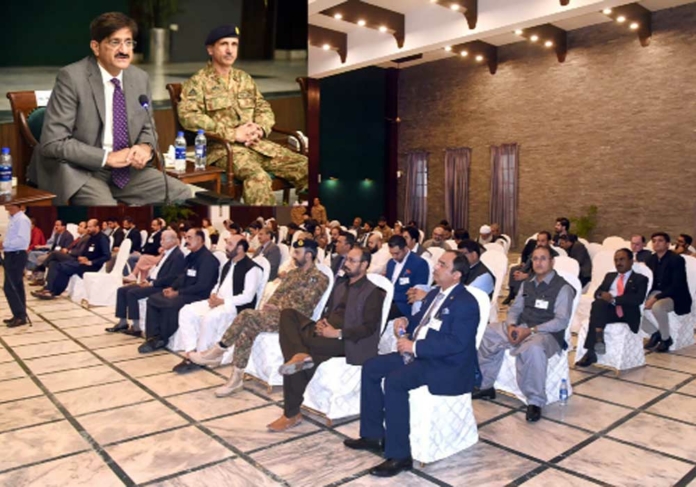 Sindh Chief Minister Syed Murad Ali Shah has said that during the last 12 years the provincial government had faced multiples challenges such as the worst law and order, floods of 2010 and 2011, COVID-19 and now floods of 2022 despite the fact the government contributed a lot in the provincial as well as national development.

Shah said that when the PPP came into power in 2008 there was the worst law and order situation in the province. That was the first and foremost challenge for the provincial government. Karachi was ranked 6thdangerous city in the world on the international crime index in 2014 and now it is at 128. “When law & order becomes a problem, the business and other all other activities such as economic, development, educational, cultural activities come to a standstill,” he said and added that law & order was restored followed by reconstruction of the city’s infrastructure.

The CM said that the Afghan war was also responsible for terrorism, therefore a National Action Plan (NAP) was launched under which targeted operation was initiated which produced the best results. Mr. Shah said that Sindh was a plural society where people of different religions live together for centuries. “Our people believe in co-existence, therefore not a single suicide bomber belongs to Sindh, all were imported,” he said.

Investments in Karachi: The chief minister said that investments in Karachi have remained high on agenda for undertaking development activities for infrastructure and services. He added that Rs. 137.3 billion were spent in the last five years for development projects mainly for internal roads, water supply, sewerage, solid waste management, stormwater drains, and transport & mass transit.

Shah said that 150 km of roads were constructed through 73 major projects along with storm water drains: 14 Flyovers/Underpasses/Bridges on major roads. He added that four Bus Rapid Transport (BRTs), 31 major schemes for Water Supply & Sewerage systems, and 28 major schemes for health and education infrastructure were in progress.

Thar Coal: The CM said that coal-fired power generation in Thar was a great achievement of the Sindh government. “When coal mining was started in Thar people were making fun of it but made the day,” he said. Shah said that when the coal mining and installation of power plant projects started the transportation of machinery to Thar was a big challenge, therefore the provincial government constructed the Sujawal bridge on River Indus. “A wide road network was established in Thar up to coal field and then an airport was constructed there so that investors and their staff members could travel easily,” he said and added today Thar was contributing around 1000 MW to the national grid.

Murad Ali Shah said that the Nooriabad power project in which his government has shares was providing uninterrupted 100 MW electricity to Karachi.  We have also constructed another bridge, Sir Aga Khan Jhik-Mulakatiar bride on River Indus and the third one is under construction to connect Kandhkot with Ghotki to facilitate the smooth flow of vehicular traffic between three provinces, Balochistan, Sindh and Punjab.

Floods: Talking about post-disaster need assessment (PDNA), the economic impact of floods-2022, the chief minister said that extensive damage in agriculture, industry, and service sectors, is estimated to be equivalent to 4.8 percent of 2022 GDP. He added that significant losses in GDP as a direct impact of the floods are projected to be around 2.2 percent in 2022, with agriculture accounting for the largest decline at 0.9 percent.

Mr. Shah said that the unprecedented recovery and reconstruction needs to be projected at 1.6 times the budgeted national development expenditure for 2023. He added that it would widen the effect on primary and overall fiscal deficits and risen the prices of food and essential items. According to the CM the higher poverty rates, with the national poverty rate estimated to increase by 3.7 to 4.0 percentage points, pushing between 8.4 and 9.1 million people into poverty.

Murad Ali Shah said that poverty in Sindh would increase by between 8.9 and 9.7 percentage points. “Multidimensional poverty in Sindh is expected to increase by 10.2 percentage points,” the CM said and added among provinces, the housing stock in Sindh has been the worst affected, accounting for 83 percent of the total housing damages. Around 4,410 million acres of agricultural land have been damaged, and 0.8 million livestock are estimated to have perished. Sindh is the most affected province, contributing 72 percent of the total value of the damage and losses registered in the sector, the CM said and added Sindh sustained the highest damage in the forest sector, amounting to Rs 1.8 billion (US$8.4 million), representing 77 percent of total forest damages.