Sindh to launch IBOs against terrorists

Decides to crush every kind of threat, including drug peddling, street crime and dacoits 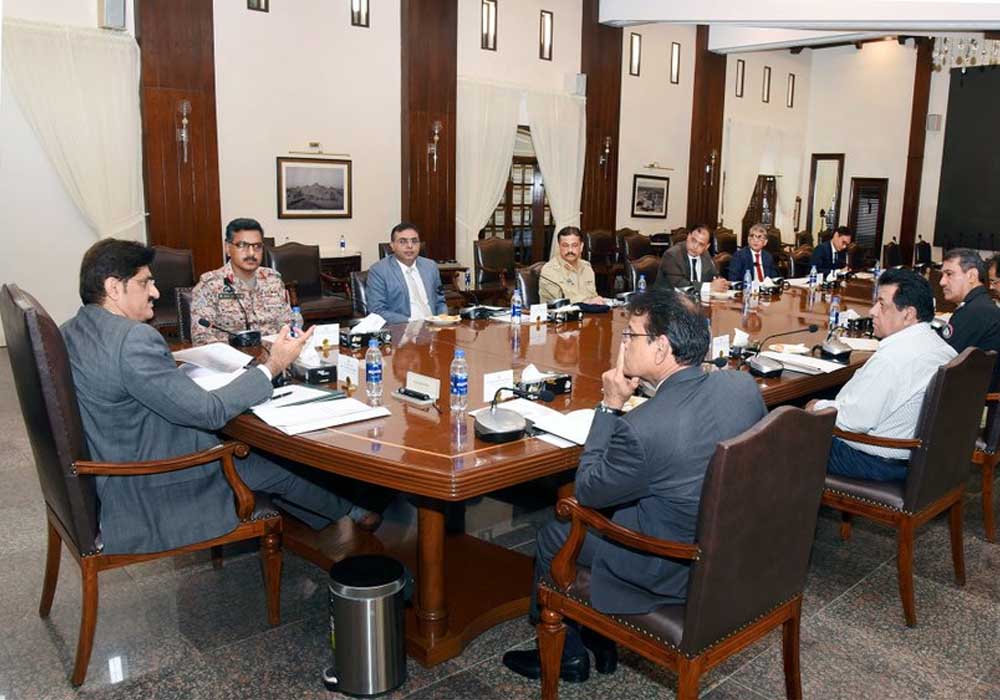 The Apex Committee in its 28th meeting held under the chairmanship of Sindh Chief Minister Syed Murad Ali Shah at CM House assessed the recent rise in terrorism incidents in the country and evaluated overall intelligence reports presented by the different agencies and decided to crush every kind of threat, including terrorism, drug peddling, street crime, and dacoits in Katcha area through an intelligence-based well-coordinated vigorous targeted operation.

The CM also decided that the three IGPs – Sindh, Punjab, and Balochistan would sit together, and chalk out a complete plan to launch an operation against the dacoits in the katcha area for which all the law enforcement agencies would support them. “In want, the operation against the bandits must be made a decisive and cleansing operation once and for all,” the CM said categorically.

The IG said that four different crimes such as bike snatching, car snatching, mobile snatching, and robberies were constituting `street crime’. He added that 85,000 cases of street crime in the year 2022 meant 7,000 cases were happening every month in the city. “If 7000 cases are divided in a month or with 30.5 days it would come to 229 cases per day. Similarly, 229 or 230 cases per day are divided with 108 police stations in the city the crime per police station per day would come to 2.1 cases,” he said and went on to say that 50 percent of the total street crime cases happened to be of bike snatching – meant one street crime happened to be taking place in the city every day.

Street criminals released: showing an interesting fact sheet about the release of repeated street criminals/habitual criminals, the IG told the Apex Committee that 1,655 criminals who had already committed at least thrice street crime were arrested but they were bailed out within one week to six months of their arrest. He added that eight criminals were released within one week, 26 within two weeks, 107 in one month, 470 in three months, 352 in six months, and 692 over six months. At this, the CM asked Advisor law Murtaza Wahab about the progress on the passing of the Sindh Habitual Offenders Monitoring Bill-2021.

Murtaza Wahab told the CM that the bill has been sent to the Standing Committee on Home for soliciting public opinion as per the rules. It may be noted that the habitual/repeat criminals would be E-tagged once the law is passed. The CM directed the law department to expedite the process. The meeting decided to continue the strategy to crack down on the menace through frequent combing operations in slum areas, continuing snap-checking during peak hours, actions against proclaimed offenders and absconders, and surveillance and action against bailed-out criminals and repeat offenders.

Dacoits: The IG Police briefed the meeting about the crime situation in Katcha areas. Katcha areas are a traditional safe haven for criminals due to inaccessibility. Criminals especially conceal themselves in small Islands of the Indus which were no-go areas for police. These criminals use these hideouts to indulge in Kidnapping for ransom, both through honey trapping and road robberies, and extortion. The Police face pressure due to kidnapping and is forced to negotiate the release of kidnappees which causes disrepute, enhances the morale of dacoits, and increases the frequency of crime. Kinetic action by police results in casualties on both sides and violent reprisal by criminals.

At this, the chief minister directed IG Police to hold a meeting with the IGPs of Punjab and Balochistan and work out a detailed plan to launch a well-organized operation against the dacoits. The Corps Commander said that the Army and Rangers would also help the police in the operation. The operation must be so powerful that the threat of dacoits is eliminated once and for all.” Said the CM. Home Secretary Saeed Mangnijo told the meeting that the CM has recently notified 275 dacoits with a total head money outlay of Rs465 million which would assist in their arrest or neutralization.

In Sukkur and Larkana regions, out of 1620 drug peddlers, 854 have been arrested, 518 sent to jail, 273 got bail, and 766 are at large. The chief minister directed the DG Rangers and IG Police to launch an operation against drug peddlers effectively. The DG ranger also gave his presentation in which he discussed the ranger’s activities against criminals.

Terrorism: The meeting discussed the terrorism threat with reference to a blast in Islamabad and decided to strengthen further intelligence-based operations in the city. All the agencies would share their intelligence information with each other and help each other in conducting the operation.

The guidelines of the federal government for the elimination of terrorism would be implemented accordingly.

Local Bodies election: The chief minister was briefed about the police deployment in the upcoming local bodies election scheduled to take place on January 15, 2023. It was disclosed that there would be 4,995 polling stations where 25,340 policemen would be deployed. A quick response force (QRF) has been assigned to provide security at 2728 buildings. One QRF would be given two mobiles and 14 policemen for guarding 10 buildings. There would be 273 QRF units to be mobilized with 564 mobiles and 2833 policemen. Apart from them, there would be a force of 257 in reserve.