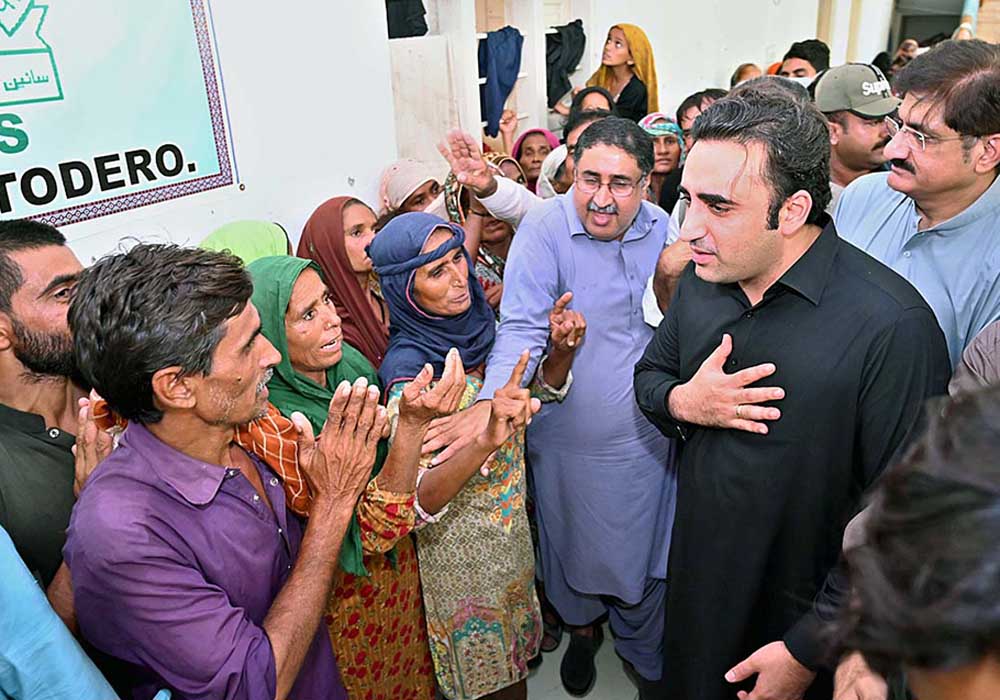 Pakistan People’s Party (PPP) Chairman Bilawal Bhutto Zardari on Tuesday said that unprecedented heavy downpours followed by hill torrents have wreaked havoc in the Qambar-Shahdadkot district, and therefore mud embankment should be developed to save the main roads and arteries connecting different cities and town of the area from topping by gushing water.

This he said while presiding over a meeting to take stock of the situation after heavy rains here at DC Office, Kambar. The meeting was attended by Chief Minister Syed Murad Ali Shah, Imtiaz Shaikh, Nasir Shah, Mukesh Chawla, Rasool Bux Chandio, elected representative of the district, and divisional and district administration officers.

At the outset of the meeting, the chairman said that he started his visit from Naudero, Ratodero, Shahdadkot, Behram, Kambar and Nasirabad. “I have noticed that Larkana-Shahdadkot Road which connects various towns and villages of both the districts is being overtopped by rainwater being gushed out further by hill torrents,” he said and directed the chief minister to develop mud embankments along the main road to stop the speedy flow of water.

The chief minister directed the chief engineer of irrigation to review the situation and arrange machinery to stop overtop and erosion of roads by rainwater.

The Qambar-Shahdadkot deputy commissioner briefing the PPP chairman said that the district had seven talukas and commutative rainfall in the district from July to August had been recorded at 2372 mm, as a result of which 34 people lost their lives and 461 sustained multiple injuries in different incidents of collapsing of houses.

According to the initial survey, 26,600 houses have been damaged completely and partially, therefore 190 relief camps were set up to settle 37,500 affected people.

The CM said that another demand of 60,000 tents, 25,000 mosquito nets, 100,000 ration bags, 3000 kitchen bags, 2,500 tarpaulin sheets, 30 dewatering machines, and six pumps had been made. “We are trying our best to purchase tents but they are not available, therefore I have requested the prime minister to arrange at least one million tents to cater to the growing need of the province.”

The PPP chairman said that he had visited various relief camps where he noticed the women after losing their homes and cattle were in a state of shock and profound grief. “We have to take care of them with sympathy and respect,” he said and added he would be satisfied when the affected families were sent back to their homes.

The chairman told the chief minister it was a great challenge for the party government in Sindh to rescue and rehabilitate people within the next few months. He urged elected people of the area to work together and own the people and help them whatever they need.

The chief minister said that he was releasing plenty of funds only and only for the welfare of the affected people. “Food and medical facilities are being provided at the camps,” he said and added that the displaced people who own cattle have settled along the roads, therefore their cattle were being vaccinated. The chairman decided that the chief minister would keep the situation reviewed.