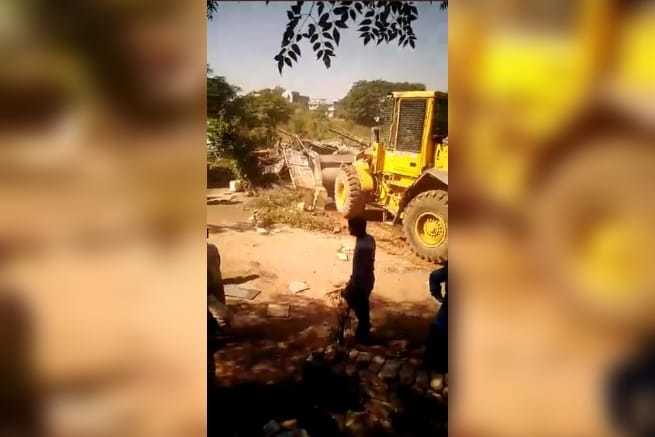 People have wondered whether Pakistan belongs only to the rich after an alleged Capital Development Authority (CDA) anti-encroachment team razed down homes in an informal settlement in G-11, Islamabad.

Political worker Aasim Sajjad Akhtar tweeted a video that seemingly showed a resident of the G-11 katchi abadi lamenting over her house being bulldozed by authorities. The woman said that the houses were razed to the ground, while inhabitantsâ€™ possessions and clean drinking water for their children were also taken away. Akhtar said that lawlessness prevailed when it came to the rich, while the â€˜daily wage workersâ€™ continued to suffer as authorities took away their shelter right before winter.

An â€˜anti-encroachmentâ€™ team of the Capital Development Authority bulldozed this katchi abadi today in sector G11 of the federal capital, on the cusp of winter.

No law for the rich & powerful; they o my victimise the daily wage workers that Naya Pakistan promised to serve. pic.twitter.com/QqL7VTOksq

The demolition drew the ire of several on the internet. An Awami Workers Party (AWP) worker Tooba Syed shamed the CDA for terrorizing the impoverished. Syed insisted people ponder over the mental harm caused to the children in the settlement and invited Islamabad to stand up against the grave unfairness.

Can you imagine the trauma of these children who are witnessing the CDA demolish their homes? Put yourselves in their shoes Islamabad and rise against this injustice. THEIR HOMES HAVE BEEN BULLDOZED! Shame shame shame!#StopEvictions #StopDemolitions pic.twitter.com/ni4012GGjF

A fiction writer, Farhan Rai said that regardless of whether the evictions were legal or not, the demolition of slums was unjust, especially since CDA turned a blind eye towards indiscretions of big developers like Bahria Town.

Regardless of 'legality' of these settlements, demolition of slums/poor neighborhoods is unfair, for as long as authorities, including CDA are turning a blind eye to buisness malpractices of big developers, inclining Behria Town #StopDemolitions https://t.co/WUs63tR6aZ

Rights activist Mashal Arbab said that the CDA should stop acting like a â€˜mafiaâ€™ and questioned where the struggling poor would go if their roofs were taken from them.

Responding to videos on social media of excavators ravaging the settlement, a user said that Prime Minister Imran Khan had demanded a stay order against demolitions. He added that CDA cracked down on the poor, while allowing the elite to take over â€˜green belts with concrete structuresâ€™.

An urban planner Muhammad Toheed echoed similar sentiments and said that CDA made the lower class suffer while pandering to the rich and powerful. He added that the demolitions occurred despite a Supreme Court stay order barring CDA from doing so.

According to the AWP too, the demolitions were in violation of a stay order that is in effect by the SC. The AWP tweeted on Wednesday that residents were rendered shelterless by the â€˜enforcement directorate of CDAâ€™ as winter closed in.

The supreme court has stay order on demolitions of katchi abadis. Toaday, in violation of SC stay order the enforcement directorate of CDA has demolished a katchi abadi in G-11 Islamabad.
Residents of the abadi have been rendered shelterless at the start of winter#StopEvictions pic.twitter.com/3Y4DI1NRBT