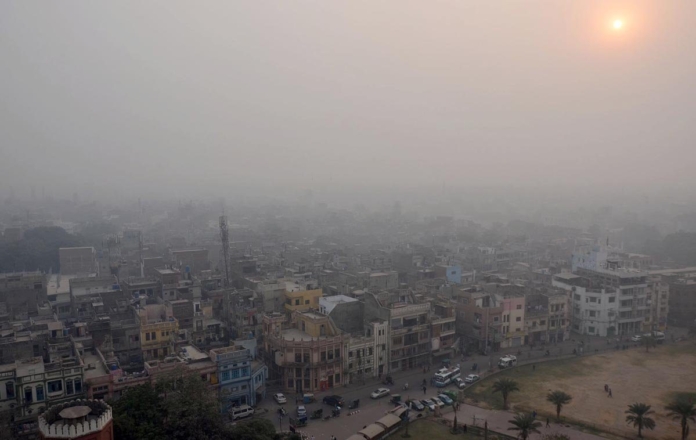 Residents of the provincial capital have no respite from the rising level of air pollution as the city’s air quality index has crossed the hazardous level above 400, exposing the efficiency of all the departments concerned.

On Sunday, citizens observed another day of a thick layer of smog in the upper atmosphere while complaining of respiratory issues and eye itching. At least eight different anti-squads have been established in the city to control the smog-causing factors. Among these squads, three have been established by the Environmental Protection Agency (EPA) while the rest were formed by the Lahore deputy commissioner.

All eight squads were given the mandate to control the polluters; industries and vehicles through sealing, confiscation and heavy penalties. However, all the anti-smog squads failed to control the pollution as the AQI level had reached hazardous levels. An official seeking anonymity informed Minute Mirror that anti-smog squads activities were just an eye-wash action taken against selected polluters while relieving the major polluters. “A few days back our teams claimed of sealing several pyrolysis plants, considered as major contributors to smog but they were still working in the city,” he said and continued that a large number of steel furnaces and re-rolling mills were also operative in the city using sub-standard fuel and carbon back (bi-products of used tyres).

Officials also alleged EPA’s district officer Ali Ijaz, saying he was behind the pollution-causing industry, still working in the city. He said that since Ali Ijaz was appointed as EPA Lahore’s district officer in May 2019, the city’s air quality level is reaching high gradually with each passing year. “Despite the fact, EPA bigwigs are reluctant to transfer him amid the severe pollution level in the city,” he added.

On other hand, EPA also remains unable to show the actual state of environmental pollution in the city as it has only one analyzer to measure the major polluter particulate matter (PM2.5) in the ambient air. This analyzer is installed in the Karol Ghatti area of the city, according to which the AQI level was recorded at 402 in the said area.

This is pertinent to mention here that EPA’s air quality monitoring system has been lying dysfunctional for the past many years. EPA started disseminating air quality data in the winter of 2017 but soon it had to stop this practice after questions were raised by different quarters as the data was fabricated. When contacted EPA’s spokesperson Sajid Bashir, said anti-smog squads were putting their efforts to control the smog without any pressure. On a question, he said that EPA’s district office was also working against polluters under the mandate given by EPA.