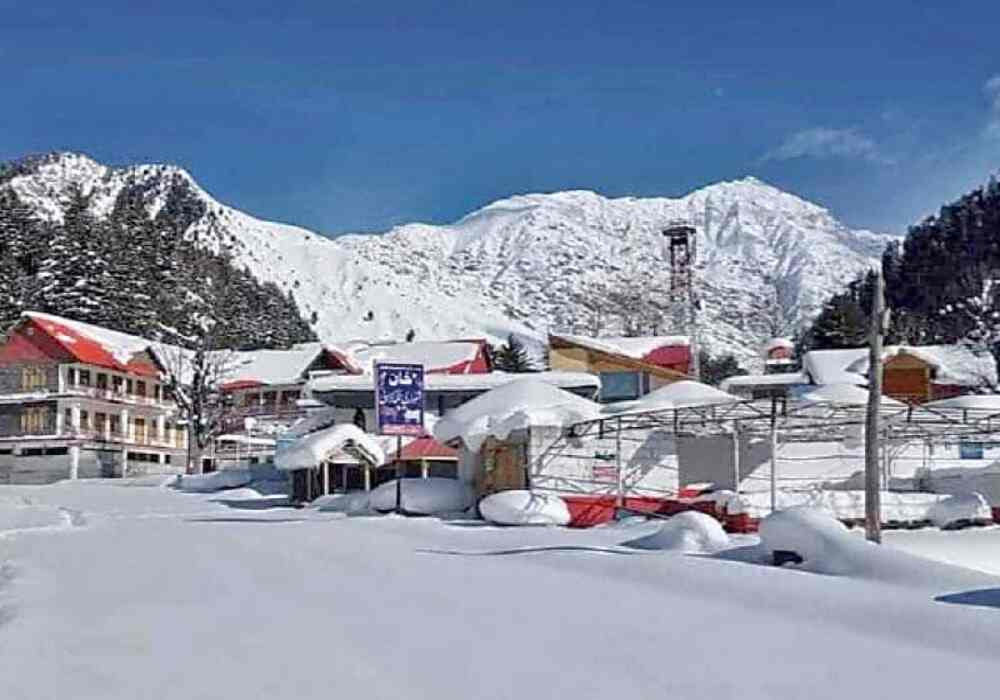 The sixth spell of heavy intermittent snowfall and rain continued on the third consecutive day in the hilly areas of the upper Hazara division, including Abbottabad, Mansehra and Battagram.

Heavy snowfall once again on Sunday blanketed the tourist attractions of the upper Hazara division where Shogran, Kaghan and Naran have received up to 2.5 feet of snow, Galyat and Thandyani more than two feet while Chhatar Plain, Konish Valley and mountains in the upper areas of Siran Valley received up to six inches of snow. The severity of the winter increased many folds due to heavy snowfall.

Kaghan Development Authority (KDA) officials, along with heavy machinery and other equipment, are present at various places to remove snow from the roads and guide tourists and local people while, on the CPEC, an additional police force has been deployed between Kadamang Bala and Koza Banda to tackle any emergency situation during the snowfall.

To enjoy the live snowfall, a large number of tourists are coming to Thandyani, Galyat, Shogran and Chhatra Plain.

GDA spokesperson Ahsan Hameed told that the workers are rendering duty for 24 hours with the help of heavy machinery for the snow clearance operation. He also directed tourists and locals to remain in touch with the control room during movement and avoid travelling after sunset as extremely low temperatures make the movement of vehicles more difficult.

He further said that maintenance of Abbottabad Murree Road of Galyat is the responsibility of GDA while connecting roads to adjoining villages fall under the domain of the C&W Department. GDA Director of Technical is supervising the snow clearance operation, he added.

On the special instructions of Deputy Commissioner Battagram Mohammad Irfanullah Mehsud, Additional Assistant Commissioner Aamirullah along with National Highways Authority (NHA) staff has opened the Karakoram Highway (KKH) for traffic by clearing the snow from Nili Shang to Chhatar Plain.

Battagram police officials are also present at Chhatar Sharkul to serve the public and tourists and help to remove the vehicles stuck in the snow.

The minimum temperature at the hilltop was recorded at -8 degrees Celsius, the lowest ever, during the last 24 hours.

The snow covered the hills’ top, and other structures as well as roads and pavements in the areas.

Faisal Amin said that this was a part of Imran Khan’s Protected Areas Initiative and that Sheikh Badin National Park has a unique ecosystem and heritage value.

Cold and dry weather is expected in most plain areas of the country during the next 24 hours, according to the Pakistan Meteorological Department (PMD).

However, light rain (with light snow over hills) is expected at a few places in upper Khyber Pakhtunkhwa, Kashmir and Gilgit Baltistan.

In Islamabad, partly cloudy weather with chances of light rain/ drizzle is expected during the evening or night.

In Khyber Pakhtunkhwa, cold and dry weather is expected in most districts of the province while light rain with light snow over hills is expected in Kohistan, Chitral, Dir and Swat.

In Punjab, cold and dry weather is expected in most parts of the province.

Very cold weather with light rain with snowfall over the hills is expected in Murree, Galiyat and surrounding during the evening/ night.

Fog is likely to occur at a few places in plain areas of Punjab during morning hours.

In Balochistan, very cold and dry weather is expected in most parts of the province.

In Sindh, cold and dry weather is expected in most districts of the province.

During the last 24 hours, rain with snow over hills occurred at scattered places in Khyber Pakhtunkhwa, Kashmir, Gilgit Baltistan and Murree.