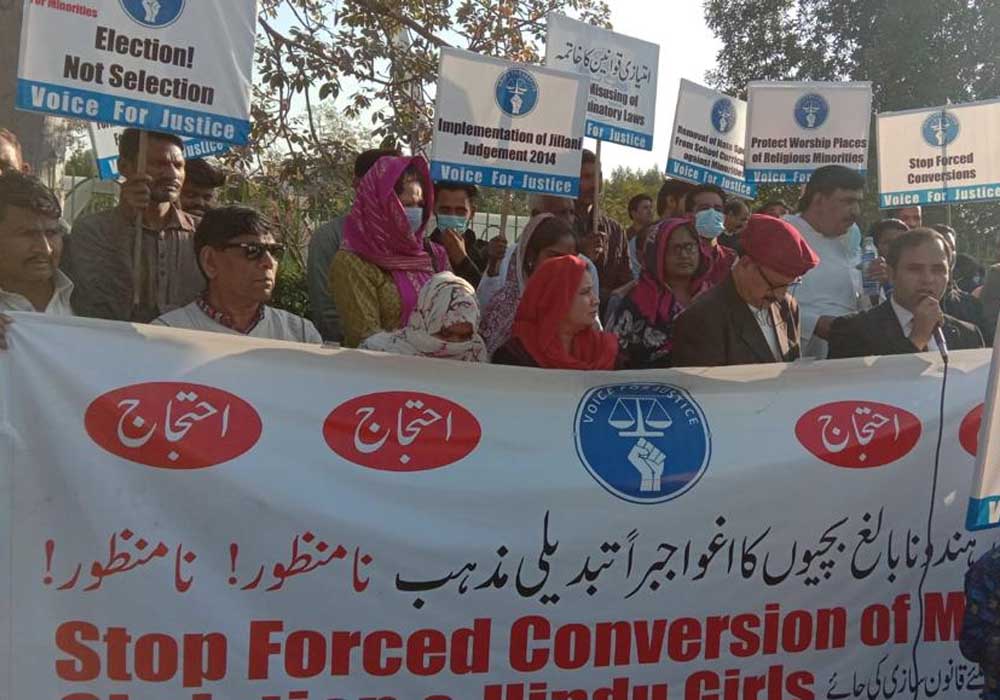 The government must improve laws, policies, and actions to promote human rights and fundamental freedoms for all, and enhance citizens’ access to justice and effective remedies, without any distinction. This was emphasized by the participants of a protest demonstration staged by the Voice for Justice (VFJ) to mark national minorities day.

Speaking on the occasion, Ashiknaz Khokhar, emphasized that Quaid-e-Azam Muhammad Ali Jinnah in his address to the constituent assembly on 11th August 1947 declared the protection of minorities’ rights a distinct duty of the state and made a pledge to promote religious freedom and tolerance, equality and non-discrimination for all. He demanded that the government must take effective measures to address the dynamics and the impact of discrimination, exclusion, and inequalities, in order to reduce the exposure of minorities to persecution, insecurity, and violence.

The chairperson at Voice for Justice, Joseph Jansen said that it is unfortunate that religious minorities have been facing historical injustice or discrimination committed against them despite they have made a significant contribution to the creation and establishment of Pakistan. The government should encourage effective participation and the constructive integration of minorities in all areas of civil, political, economic, social, and cultural life of society.

Nadia Stephen said that the right to religious freedom prohibits the use of coercion to make someone change their religion. Therefore, the government must introduce a comprehensive bill criminalizing forced faith conversions to bring perpetrators to justice for their crimes involving child marriage, forced conversion, and sexual violence.

Abid Chand said that the government must create favourable conditions to ensure that minorities are able to express their concerns and engage in the national dialogue on policy matters, and identify solutions to prevent and address human rights issues that they confront. He demanded that a statutory National Commission for Minorities’ Rights must be constituted, with a mandate to monitor the implementation of minority rights, address violations, and contribute advice for policy reforms, in order to strengthen protection for minority rights.

Emmanuel Sardar said that although the government has introduced an affirmative measure for minorities’ empowerment by allocating 5% reserved quota in public sector jobs, however, they are less likely to benefit from this provision due to a lack of trust in the recruitment process and the absence of redress mechanism. He demanded that a regulatory body must be established, with a mandate to monitor and address complaints, in order to enforce the job quota reserved for religious minorities.

Imran Javed said that advancing religious freedom is a human rights obligation of the states, therefore, the government needs to fulfill its responsibility towards protecting the rights, and take measures to ensure freedom, and justice for marginalized groups particularly minorities.

Saleem Shoukat said that minorities should not be treated differently, and they must not face discrimination, hatred, or violence solely on the basis of their particular faith. The government must take legal and administrative measures to ensure effective non-discrimination and de facto equality for all, and take serious actions against actors involved in committing persecution, to prevent and better respond to violence targeted against minorities.