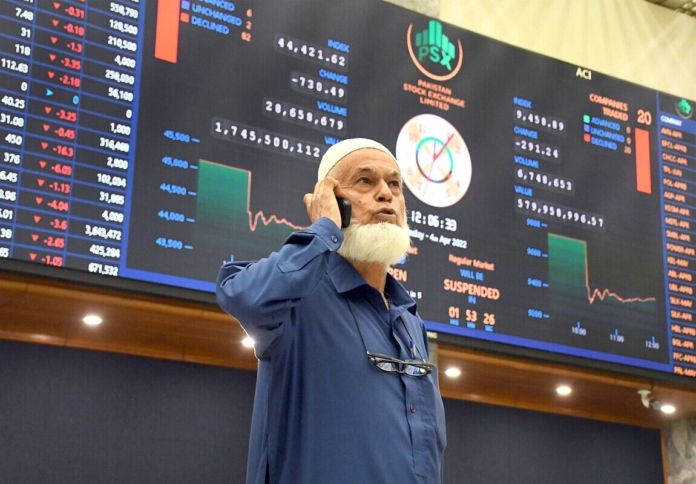 Share prices plunged at the Pakistan Stock Exchange (PSX), as the benchmark KSE-100 Index was down over 600 points in the early hours of trading on Wednesday.

Imran Khan had announced on the previous day that his party will start the long march to Islamabad on Friday.

Analysts have said that the downward trend has been shown due to political instability after PTI’s announced long march on Friday.

The KSE-100 index benchmark lost 672 points in the early hours of Wednesday.

Raza Jafri, Head of Research at Intermarket Securities, has said that because of Imran Khan’s announcement of the long march the index was under pressure. He said that as long as the march doesn’t disrupt stabilization efforts for the economy and foreign exchange reserves, its impact would not have a lasting impact.

Amir Shehzad, Director at First National Equities Limited, has said that economic indicators have not changed therefore the only reason for the market’s slide was the announcement of the long march.

According to AKY Securities Chief Executive Officer Amin Yousaf, the negative sentiment was attributed to Imran’s announcement because of people’s concerns about political instability.

Yousaf also said that being the rollover week people were swapping their positions which have contributed to the downward trend. He also said that low inflows, pressure on the rupee and increasing oil prices internationally led to increased inflation.