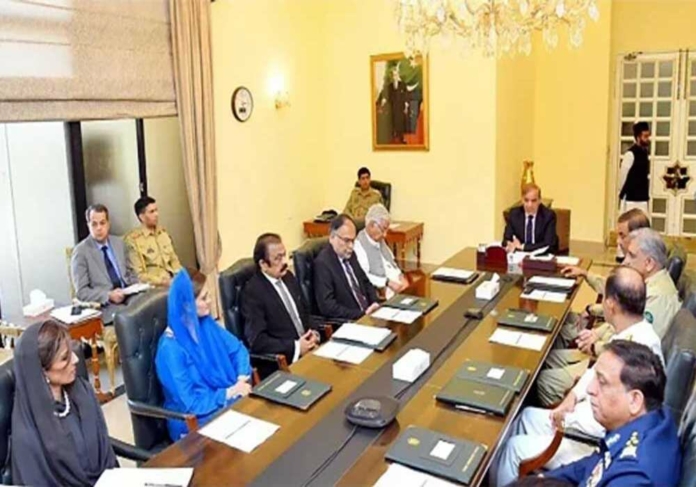 Prime Minister Shehbaz Sharif on Friday said that terrorism won’t be allowed to flourish again in the country.

He made these remarks while presiding over an important meeting of the National Security Committee (NSC) to review the security situation of the country. Chief of Army Staff (COAS) General Qamar Javed Bajwa and heads of intelligence agencies also participated in the meeting.

The defence minister, the interior minister, and foreign affairs ministers were also present on the occasion. The situation of Swat and issues related to negotiations with the banned Tehreek-e-Taliban were discussed in detail and the security agencies presented their recommendations in the meeting.

Addressing the participants, Shehbaz said that peace was restored in the country with great sacrifices and the sacrifices of the security forces in ending terrorism were unparalleled. “The sacrifices of security personnel and people cannot be forgotten.”

The attendees appreciated the role of all law enforcement institutions, including Pakistan Army, Rangers and police, for establishing law and order, and for security and defence of the country, and also paid tribute to the martyred officers and jawans for the sacred cause.

The participants saluted the families of the martyred and acknowledged that the martyred wrote great tales of bravery and courage with their sacrifices. They reiterated the pledge that the sacrifices of martyrs would not be allowed to go waste.

The meeting declared that the nation and the state institutions were united, and had the same voice for protecting the life and property of the citizens, defence of the territorial integrity of Pakistan, rule of constitution and law, and for enforcing the writ of the state. The whole nation was united with the clarity of mind on the above objectives, whose achievement would be ensured at every cost, the participants pledged.

The leadership made it clear that the blood of every Pakistan was very precious and the law would strictly deal with every person involved in shedding the blood. “Our citizens rendered exemplary sacrifices and played a historic role along with the brave forces in the war against terrorism.” The meeting decided to form a federal-level apex committee headed by the prime minister.

It was decided to activate the National Counter Terrorism Authority (NACTA), which would work together with the counter-terrorism departments at the provincial level. The NSC also approved effective steps to make the security of projects of China-Pakistan Economic Corridor (CPEC) foolproof. In that connection, NACTA would act as a coordinator and the provinces would implement the counter terrorism plans.

Earlier, PM Shehbaz and COAS Gen Bajwa held a one-on-one meeting and discussed matters pertaining to national and internal security in detail, while the overall law and order situation of the country was also discussed.