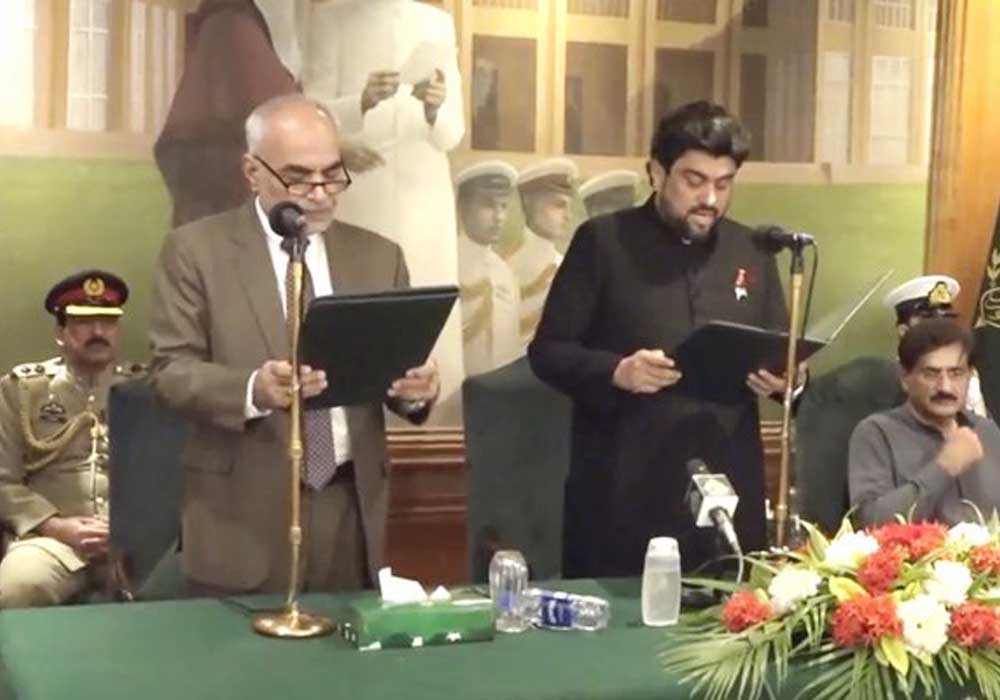 Muttahida Qaumi Movement-Pakistan (MQM-P) former deputy convener Kamran Tessori on Monday took oath of the office of Sindh governor. He became the 34th individual to have occupied the covetous post in Sindh.

Tessori was appointed as the new governor on Sunday. President Arif Alvi had approved his appointment under Article 101 of the Constitution.

Before taking oath of his office, Tessori resigned from the post of deputy convener of MQM-P Rabita Committee.

On September 11, the MQM-P had called a meeting of the party’s coordination committee to decide Tessori’ fate who was restored as the deputy convener of the party in a move that caused disappointment to many party leaders and workers.

The decision to induct Tessori back into the MQM-P was made in a meeting held with MQM-P Convener Dr Khalid Maqbool Siddiqui in the chair. Around 15 members of the coordination committee participated in the meeting, which was also attended by Tessori.

However, a number of senior party leaders were absent and later some of them openly expressed their concerns over the party decision to take Tessori back in its ranks.

Tessori was the primary reason for the conflict between MQM-P head Farooq Sattar and other party leaders, which eventually led to the ouster of the former from the party. The MQM-P coordination committee removed Sattar from the convener post as the latter insisted on awarding the party ticket to Tessori in a by-election. Later, Sattar formed another faction of the party called MQM Restoration Committee.

Tessori, besides MQM-P leaders, was also choice of former president Asif Zardari. The post of Sindh governor had been vacant after the resignation of Pakistan Tehreek-e-Insaf (PTI) leader Imran Ismail in April.

The appointment of a new Sindh governor had long been held up after Ismail’s resignation, as objections were raised on the candidates nominated by the Pakistan Democratic Movement (PDM) government. One of the candidates nominated was former MQM-P Senator Nasreen Jalil. However, objections were raised about her history and questionable ties to organisations and individuals abroad, particularly her letter to Indian authorities.

Speaking after the ceremony, Tessori said that he would try to fulfil the duties that he had been entrusted with. “I will work in harmony with everyone to fulfil my obligations. With regards to the problems of the province, I will raise my voice at every relevant forum,” he added.

Earlier, in a statement issued after the president’s approval, an MQM-P spokesperson said that Tessori would play the role of a bridge between Sindh and the Centre.

In this regard, the spokesperson said that since the establishment of the current government, the Sindh governor’s post was lying vacant.

“MQM-P had given five names in the first phase but no progress could be made on these names. Then the names of Kamran Tessori and Abdul Waseem were sent for approval and the president gave his assent to Tessori’s nomination.”