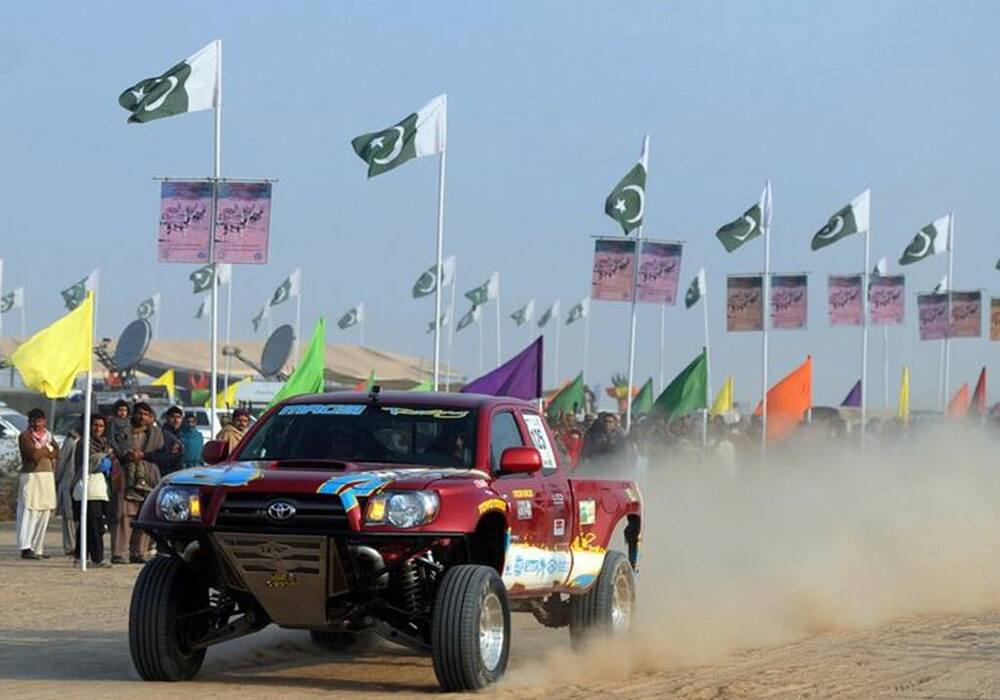 Thar Flood Relief Jeep Rally and other events got underway in the desert district on Friday.

On the first day of the three-day rally, as many as 67 drivers including the eminent racers including Mukesh Kumar Chawla, Dina Patel, Shahzada Sultan, Maham Shiraz, Asif Imam, Roman Sanjarani, and others from across the country  were among those who qualified for the final rounds to be held on Saturday and Sunday. They qualified for final contests after covering the track of three kilometers along the sandy track prepared for the marathon rally. Arbab Lutufullah, the Special Assistant to Chief Minister Sindh for Sports inaugurated the events.

Speaking to the media persons, Arbab Lutuf said that they had organized the event with intentions not only generate funds for the flood-survivors of the province but also to promote the tourism in the desert district. He said that the previous such event organized by his ministry had greatly helped them introduce the various aspects of the region which otherwise had hit the headlines for bad news of droughts and subsequent deaths of kids and livestock.

He said that the high-ups of the Sindh government including Chief Sindh Syed Murad Ali Shah and others happily allowed him to organize the mega event again in his home district adding he said several hundred known personalities of the country arrived at the venue with their vehicles and co-divers to take part in the race. “We have been trying our best to promote such activities in the region which was once considered to be among the most backward areas of the country “he said and added that such events would go a long way to attract the tourism and other activities in the district.

He said that they prepared the sandy track with the hectic efforts and denied the reports that such activities would cause any harm to the species of wildlife. He said that like his late father Arbab Ameer Hassan, who was known as an uncrowned king of Thar, also strongly believe in the cultural values and in the protection of fauna and the flora of the desert region. Arbab Lutuf claimed that they had organized various other contests to promote the local sports and games to provide entertainment to the people of Tharparkar.

Replying to the questions regarding the death of a fawn along the track, he said that he had directed the officials of the wildlife department to probe the matter. He claimed that dead fawn might have been thrown by those miscreants, who had been opposing the event for the alleged vested interests. Arbab Lutuf said that event was aimed at to collecting funds for the flood-survivors of the province and to promote the tourism and other healthy sporting activities in the desert district. The participants of the rally also spoke on the occasion and lauded the efforts of Arbab Lutufullah and his team members to provide them with such healthy activities in a very calm and peaceful atmosphere in the desert region.