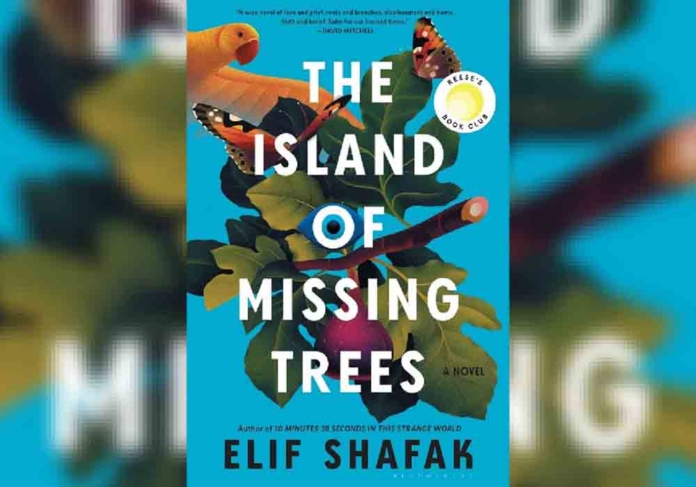 Elif Shafak, author of the acclaimed book Forty Rules of Love, recently penned a novel, The Island of Missing Trees.

A tale of love and division, the novel shifts between post-colonial Cyprus and London, exploring themes of generational trauma and belonging.

The book is divided into six sections and each is named after the part of a tree; the trunk symbolizes order, safety, rules, continuity. The branches symbolize change and freedom and the roots signify heritage, identity and traditions. When seen together, they form the entire ecosystem.

The novel has, as its center, a fig tree. It is one of the central characters and it is through the fig tree that she integrates ecological concerns and issues with human traumas and struggles.

The prologue highlights the thematic concerns in a comprehensive yet succinct manner. It talks of war and its ravages, love and hatred, time and captivity, secrets that unfold, pain and misery.

The novel tells a story of love between a Christian Greek Cypriot, Kostas, and a Muslim Turkish Cypriot, Dephne. The two teenagers meet at a tavern run by a gay couple, Yusuf and Yiorgos.

It was a rough time in Cyprus. It was the year 1974 when the Greece-Cyprus riots erupted. Turkey invaded Cyprus because it wanted to reign over the island. Thus, those were times when any relationship between a Turk Cypriot and a Greek Cypriot was forbidden. It is through Dephne that Shafak talks of how her father was so unaccepting of breaking this norm!

â€œBut for him honor was everything and when he found out that I wasnâ€™t the daughter he thought he had, it just destroyed him.â€

Nonetheless, it is in these arduous times that Dephne and Kostas dare to sprout a bond of intimacy and tenderness, not knowing the pain and agony this â€˜impermissible loveâ€™ would spawn!

The following quote encapsulates the definition of love impeccably:

â€œIt is a land without borders, a loverâ€™s body. You discover it not at once but step by anxious step, losing your way, your sense of directionâ€¦finding it warm and welcoming…â€

It is a stark comparison to the truth of conquering land and conquering hearts, as Shafak says:

Whilst love knows no bounds, lines â€“ red, yellow and green â€“ define maps. Love is unconditional but not power!

Shafak beautifully entwines the symbolism of the fig tree with the personal narrative of Kostas and Dephne.

â€œWhen you save a fig tree from a storm, it is someoneâ€™s memory that you are saving.â€

As Kostas and Dephne bring the dying fig tree from Cyprus to London to rejuvenate and revive it, the fig tree becomes a persona for Dephne.

“The tree was being strangled by its own roots. Because it was happening under the earth, it was undetectable.”

“But underneath something was strangling her – the past, the memories, the roots.”

The parallel between the fig tree and Dephne is striking. The fig tree stood as a witness to the pillage caused.

The author brings forth an important notion – of identity and migration. She compares the birds migrating to warmer climates during the cold with the human migration caused by the brutality of war and destruction.

And as the fig tree leaves home for a new abode, she says:

â€œThat is what migrations and relocations do to you. When you leave your home for unknown shores, you donâ€™t simply carry on as before; a part of you does inside so that another part can start all over again.â€

Cyprus was a green island. But over time, locusts plagued the island. Forest were cleared to build vineyards and to cultivate. Constant logging, multiple fires and sheer ignorance on behalf of the government and people and wars were responsible for the disappearance of the trees.

Shafak, keeping all of these facts under consideration, explains the significance of trees. As the fig tree talks to us, it emphasizes on why preserving nature, especially trees, is paramount to the survival of the human race.

In the sub-plot of the novel runs the narrative of Ada and Meryum. Ada is the offspring of Kostas and Dephneâ€™s relationship, while Meryum is Dephneâ€™s sister.

As the bond between the aunt and niece strengthens, after going through a stormy, turbulent time, Ada finally opens up her heart to her aunt.

Meryum guides Ada, enabling her to come to terms with the unsaid, i.e. the taboo topic of Dephne and Kostas.

The secrets reveal and give way to acceptance. Ada feels a warmth towards Kostas and they finally share an alliance of love, trust and honesty. The missing pieces of the puzzle finally fit in, forming a complete picture.

â€œAda let the grown-ups hug her, and she felt their love enfold her, soft but strong like a cloth woven from the fibers of sturdy plants.â€

The lines show how words unsaid, feelings unfelt and truths hidden can obstruct healthy relationships from flourishing. On the other hand, a realization of all these aspects can bring forth joy and mirth which is unmatchable.

In a split second of friendship, Kostas answers Adaâ€™s queries regarding the different parts of a tree and what it signifies.

He tells his daughter:

â€œYou my love are a different tribe altogether. You spot a tree and you want to connect the trunk and the branches and the roots, you want to hold them all in your vision. And thatâ€™s a great talent, your inquisitiveness. Donâ€™t ever lose it.â€

Ada, like her father, is a strong, determined and sturdy person.

Ada means ‘island’. And like the island of the missing trees, i.e. Nicosia, which stood steadfast through the perils of war, Ada goes through her crisis of identity and family history.

The novel ends with a reconciliation between the fig tree; Dephne and Kostas. It ends on a note of how with time will come renewal and healing. Dephne, named after the Greek mythological tree, Daphne, highlights the valour in a woman. Daphne dared to reject Apollo!

Ending on a note of defiance and resilience, Shafak leaves the reader mesmerized by her unique approach to the stylistic technique she uses.

The amalgamation of the human psyche with that of a tree is an eccentric approach towards writing a novel, resulting in an outstanding book that combines in a perfect blend of fact and fiction.